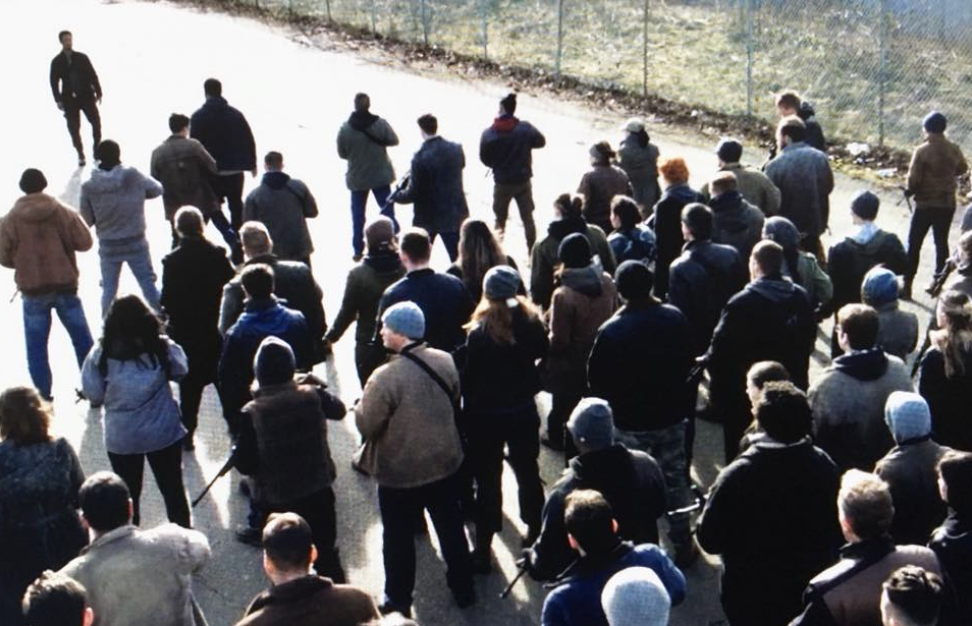 There's no prize, but feel free to find me anyways.

“If any of you lose your assigned weapon, the RCMP will shut down this show and NO ONE leaves until it’s found.” the weapons wrangler sternly told the crowd of shabbily dressed onlookers, each carrying various prop rifle models, all pointed to the ground as instructed. What Goes Around, which would turn out to be the series finale of USA Network’s Colony was being shot in a remote industrial corner of Surrey and no one was in the mood to be detained in that part of town, especially on a cold day in February.

The email from BCF casting had listed my part as “Outlier Calvary’. While background performers don’t have characters per se, a few of us like to imagine backstories for our on-screen counterparts to help pass the long hours in the holding room. Had the injured bystander I had portrayed mere weeks and episodes prior morphed from victim to armed freedom fighter? Only the fan Reddits know for sure.

My costume in this case consisted of my own jeans and hoody topped with an aged tan winter jacket supplied from wardrobe. I wish I could recall the exact model of firearm I was issued from the peops department. It was certainly the most futuristic-looking and streamlined of the bunch, more likely to fire a laser than any conventional rounds. Some said it looked Israeli so we’ll go with that.

I discovered on this outing that I was far from the only post-production professional doing background as a side-hustle. Fellow assistant editor Eugen Mihalička was also on the scene, looking far too jolly for the grim ambience. At least there was finally someone to hold my gun during bathroom breaks.

Our scene was a short and seemingly simple one, but required a surprising amount of choreography to pull off. The wranglers had approximately 30 players assemble in a V-formation before populating the remaining triangle with the rest of us carefully spaced to maximize visual impact.

It took us more tries than I would’ve figured to march over to where the dialogue between the characters Dean (Benz Antoine) and Broussard (Tory Kittles) about raising some “Holy Hell” took place. Dialogue I couldn’t even hear being at least midway into the pack. A lot of doing background is waiting weeks, months or years to figure out just what the hell you were a part of.

Until the episode aired, there wasn’t much left to do except return props and costumes and pile onto the shuttle headed back to the Scott Road Skytrain station. Those of us in the “Outlier Calvary” wouldn’t get to see any real action with no fourth season on the horizon (the stunt pros would have all the real fun anyway). But another recently-relocated show would soon have grander plans for some of us.

NEXT: Trapped underground with SALVATION.