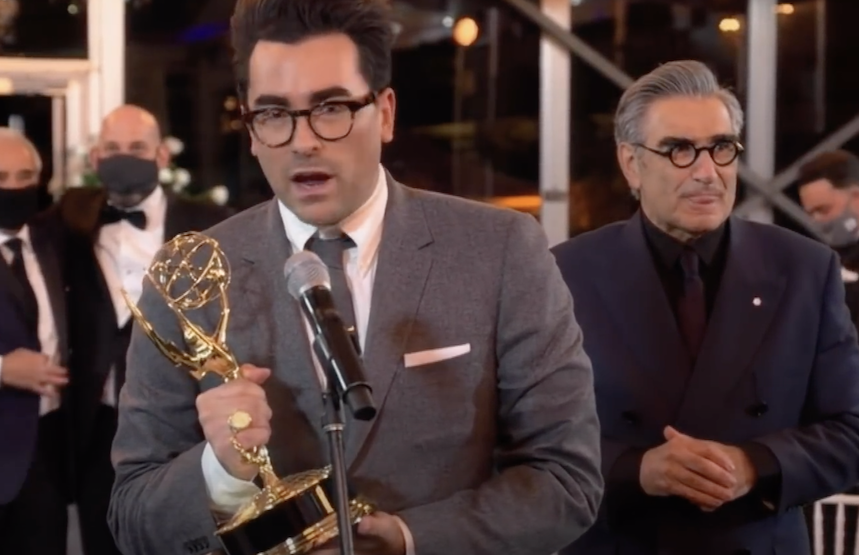 Schitt’s Creek became a Canadian favourite during its early seasons, but it was only after an international release through Netflix and the increasing acclaim it drew that the show became sitcom royalty, the likes of which Canada has rarely seen. If ever.

With that came well-deserved, albeit overdue recognition. At last year’s Emmy Awards the fifth season of Schitt’s Creek landed three nominations for Outstanding Comedy Series and the performances of Eugene Levy and Catherin O’Hara. Competition proved to be too stiff, particularly against industry darling Phoebe Waller Bridge and the final season of her hugely successful show Fleabag, which won in two of the three categories. Nevertheless, such recognition was an award in and of itself.

Like the Oscars and its affinity for the depiction of real-life figures and events (which I happened to mention last week), the Emmys love rewarding a great final season, especially when they sense a past snub. Jon Hamm’s long-awaited win for his performance as Don Draper in Mad Men and Matthew Rhys’ recognition in the last season of The Americans come to mind.

During its run Schitt’s Creek was always something of a dark horse in the Western sitcom community, which has produced several other excellent productions in recent years, such as the aforementioned British TV show Fleabag and Northern Ireland’s Derry Girls, while the US also produced unforgettable gems like Parks and Recreation and The Good Place. Despite its underdog status, Schitt’s Creek was certainly nomination-worthy between its third and fourth seasons yet remained overlooked until its fifth.

It is worth noting, before I continue, that until The Marvelous Mrs. Maisel’s success in 2018, the comedy categories had been dominated by three different TV shows for eleven straight years, with Outstanding Comedy Series going to Modern Family five times, while 30 Rock and Veep each won three. Oh, and every win in that category by these shows was consecutive, whilst garnering numerous nominations and wins for their acting and writing.

However, none of these shows, or any show for that matter, has matched Schitt’s Creek’s record-setting achievements on Sunday night.

The show’s bases were already loaded with eight nominations at the 72nd Primetime Emmys, including nominations for its four lead actors Eugene Levy, Catherine O’Hara, Dan Levy and Annie Murphy, which happened to fall within each of the comedy acting categories. Not only is Schitt’s Creek the first show, comedy or drama, to win in every one of those four categories at one ceremony, but it is also the first to win in the so-called ‘big seven’, which includes Outstanding Writing, Directing, (both of which was awarded to Dan Levy) and overall Comedy Series.

Dany Levy became the first person to win awards for acting, writing, directing and producing all in one year.

If you combine all this with the show’s wins at the Primetime Creative Arts ceremony, Schitt’s Creek set a new record for the most awards earned in a single year by a TV programme.

So, while Schitt’s Creek had already cemented its place in the annals of sitcom with what initially seemed a fitting conclusion, it is instead the show’s unprecedented success at this year’s Emmys that proves the ultimate send-off for one of modern comedy’s greats.