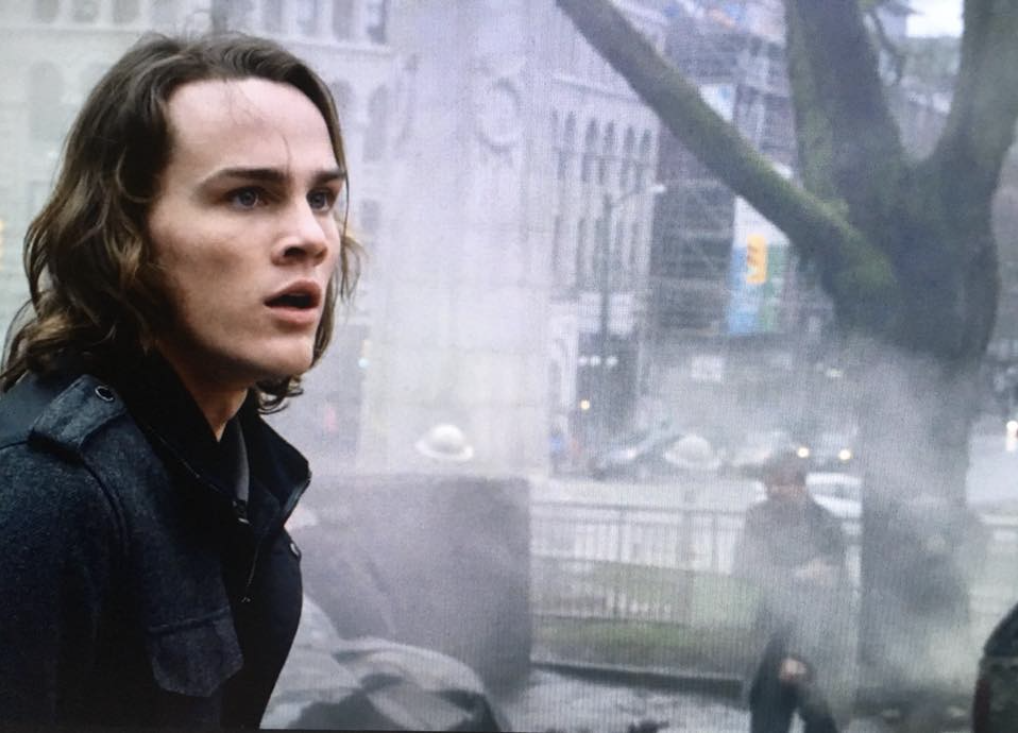 “I’ve just seen the set guys and…..it’s awesome.” our background wrangler informed us in complete deadpan eliciting laughter from his audience, huddled together in an empty classroom beneath VCC’s downtown campus.

It was still early morning, but an uninitiated observer would have been led to believe some horrific accident had befallen this motley collection of souls, for almost every single one of us bore at least some level of horrific bodily injury. Blood spatter, burn marks, smoked shrapnel sticking out in odd places, and at least one lucky victim bore sufficient facial burns to moonlight as Freddy Krueger. I myself bore considerably lighter scars than my brethren. Paired with my trench coat and close-cropped hair, I might have been taken for Rick Deckard, the hard boiled Android hunter of Blade Runner fame.

But it wasn’t that particular IP that had the 40-50 of us gathered and made-up for trouble that morning back in January 2018. USA Network’s sci-fi series Colony had recently relocated here from LA in the latest round of film tax credit tug-of-war and shooting on a key scene in the third season’s 10th episode was about to begin.

The wrangler wasn’t kidding. Vancouver’s Victory Square had been transformed from a slightly run-down war memorial into a burning urban war zone. Everything within a block radius from brick facades to turn of the century cobblestone was scorched and littered with charred debris. A nearly-destroyed semi truck served as the centrepiece of this horrific scene that was soon to be enlivened(?) with human set decoration of corpses and disoriented, injured bystanders.

Impressive as the set was, it wasn’t quite enough to distract us from the customary wet winter that typically befalls the Pacific Northwest (snow around here is restricted to one week around Xmas). I was fortunate enough to play a bystander with sufficient mobility to seek shelter between takes, but the corpses of the group weren’t so lucky, being left to pray for an umbrella.

“Roll sound…speed…scene(?) take 1…BACKGROUND!…..ACTION!”. As those of us still alive stumbled around in mock pain, series regular Alex Neustaedter rushed into the scene from a nearby alley trailed by a handheld camera team. He took in the million dollar surroundings standing in for a post-apocalyptic Seattle before the expected CUT!” rang out.

“Remember that girl in the pink?” a fellow performer gossiped to me moments later. “Yeah, she was giggling all through that take. They booted her off.” With that I learned that whether captured on camera or not, the performing part of background was to be taken seriously.

After some adjustments to keep us all from stumbling in the same direction herd-style, a few additional takes put this first one-shot scene in the bag. It was time for the crew to prepare the next scene and for the background to get out of the way (and out of the rain) and return to holding.

There’s something mildly disconcerting about witnessing a large group of people with untreated gashes, wounds and burns all sitting around, laughing, checking phones, playing cards. It’s almost something out of Hell’s waiting room. Knowing I may not make it on camera, I took the chance to sneak away from the wranglers and preserve my look via selfie. Post-lunch or post-crafty (it’s all just free food) saw us back to set where the rain had levelled off, but the chill hadn’t. The director seemed unsure if he would need all of us, so I found myself among a small contingent passing the time under a tent as a more experienced performer regaled us with the differences between BC’s UBCP Actor’s Union and ACTRA in the rest of Canada (although UBCP is technically part of ACTRA, but good luck figuring that out).

My biggest regret of that day or any of my background gigs is that legendary actor and improv master Wayne Brady was on set and I was completely oblivious until a fellow performer lucky enough to be featured told us that Wayne had spent multiple takes gazing into her eyes as she laid on a gurney. Some people have all the luck.

Turns out we weren’t needed for the second scene and all background was promptly wrapped for the day. It wouldn’t be my last day on the show however. Turns out the show needed a whole whack of us for the finale and far from being victims again, this time we’d be armed.