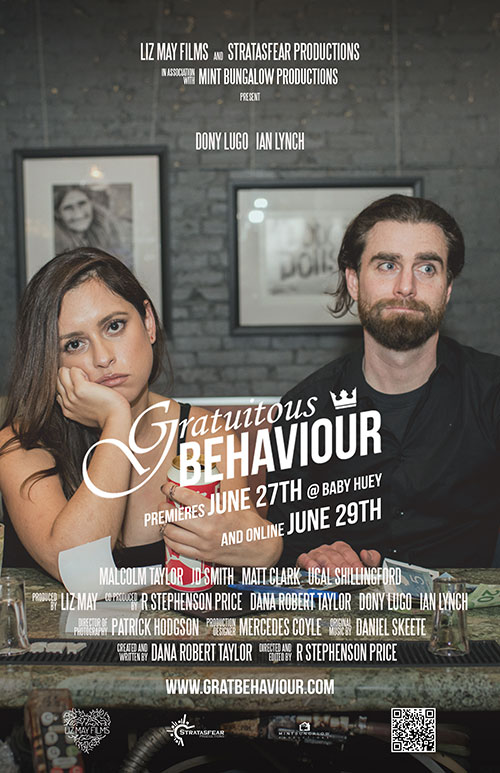 Coming online this Wednesday, June 29th, is Gratuitous Behaviour, a comedy web series and podcast about the life of a bartender. The series is written and co-produced by Dana Robert Taylor, who used to work as a bartender in the past. Liz May of Liz May Productions is serving as  the series producer, and local Toronto director R. Stephenson Price is the series director. It stars Dony Lugo and Ian Lynch, who take on the roles of Avery Leigh Davis and Wesley Greene, two servers who share stories on how they deal with the stress of their jobs, mainly by complaining gratuitously.

The series was inspired by comedy series such as Parks and Recreation, It’s Always Sunny in Philadelphia, and Brooklyn Nine-Nine. About 19 pages per day of the production were shot for four days.

Gratuitous Behaviour shows what it would be like if a server had the ability to complain about her job to the world rather than her cat at home. Dana Robert Taylor says, “Most podcasts, and podcasters are funny, even when they don’t realize it. It’s a DIY industry that sells the most specific content to the most specific (highly, highly niche) markets imaginable. It’s all slightly absurd — which makes it slightly perfect.”

Liz May and R. Stephenson Price have also stated that this is an ambitious project that takes a lot of effort, and they are grateful especially to the actors, some just beginning their careers. Even more so that the budget was only about $2,500, brought in by a fundraiser by fans and Toronto’s local film industry.