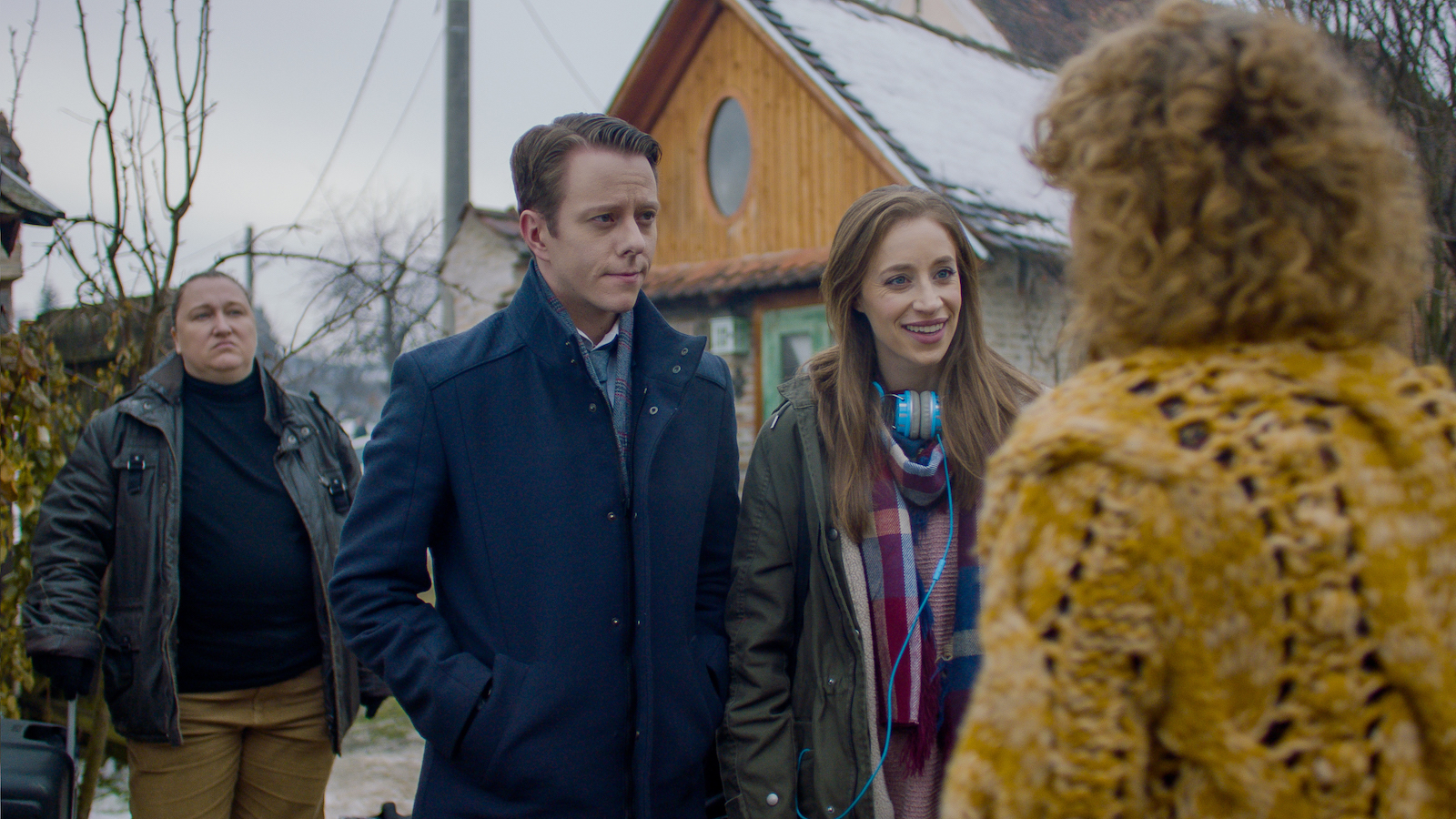 Come along on a trip to Poland, where you will discover Canadian siblings working hard to fulfill the final wish of their Bubbe (grandmother), specifically burying her dogs remains with her. The Dancing Dogs of Dombrova is a very interesting film and is currently screening at Whistler Film Festival. After seeing an amazing story about a journey in a small Russian village, I got the honour of speaking to director Zack Bernbaum and Lead Actor Douglas Nyback (giving a little insight) regarding their rather long, but fascinating feature.

HNMAG: So how did you arrange for the crew to make it out to a foreign country?

Zack: We actually filmed in Romania, so there was only a handful of us. I think there was about 6 total from Toronto and there was myself, the lead actor Doug, our lead actress Katherine Fogler, our cinematographer Steve Whitehead, and our camera assistant as well. So everyone else was local, on the ground, in Romania, which was pretty awesome.

HNMAG: What was it like shooting in such a small village? How did you manage to find such specific locations?

Zack: That was just a lot of location scouting. Steve and I went out in October before we filmed, and did some casting and location scouting. So we found a handful of things that we loved and we were able to start securing locations around then. Then when we went back in January for pre-production, we found a lot more. We had our service producers on the ground in the interim period finding other spots. We had certain looks that we were going for, and we shot mostly in Transylvania. We were looking for specific regions and towns. Sometimes it was just as simple as driving down random backroads and saying “Oh that looks great, let’s stop here. That works! Add it on the list!” You never know how you’re going to find, and we found some pretty amazing spots.

HNMAG: Were there any major issues while in Romania?

Zack: The weather conditions were quite difficult. It was -20, -25 in the first few weeks especially. I’m wearing a parka and 4 layers underneath and I’m shivering. The actors are, unfortunately for them, NOT wearing that. It was a design choice, where you don’t want people walking down the road in  big puffy jackets. It doesn’t look as nice, and so you want a certain look so I apologized to my actors for having to experience that. But it looks great, and so that’s the memory you get out of it.

HNMAG: Was it a difficult casting process to find actors?

Zack: For the two leads, it was actually pretty simple. They’re both good friends of mine, I worked with Doug on a short film a year and a half ago prior to this one. They were my first and only 2 calls for the leads. While developing the script, I kept hearing the two voices in my head. Also, we were going to Romania, I want to be working with people I know and trust, and that are going to be in the trenches with me. So when I went to them, I knew that I was going to be very fortunate.

HNMAG: How much preparation had been put into this concept?

Zack: It’s very much inspired by my grandmother, my Bubbe. The story goes I was spending time with my family and my sister’s dog starts jumping up and down and my Bubbe goes “Oh, she’s dancing!” So there’s this dancing dog, my Bubbe is from Dabrowa Gornicza, and it kind of formulated from there. Coming up with the storyline, it was a progression out of that title, and working with the writer Michael Whatling, and adding further to that story. It actually came together pretty quickly, I think the first draft was in May, we then started shooting in January. Bringing Katherine and Doug along really helped them define their voices. Having them read drafts, they were asking me questions like “Why is the character doing this?” and “I don’t really understand this, this line is really hard to say. It was great having their insight.

Doug: Yeah, it was a very collaborative process once we were cast, and that was a really wonderful opportunity because you often don’t get that. It was awesome that Zack and Michael were open to our voices and I think the whole production got richer because we were all on the same page.

Zack: Yeah, it was my first time where I actually had that experience as well where you’re able to incorporate afternotes and after seeing things very differently they’re character focused. Maybe it was something you thought about and then moved on from it thinking “Oh no, that’s fine.” But then they read it and say “Oh no, that’s not fine. Why is this happening?” and it really makes you question things, but in a good way. So when they came back with really specific questions it really enriched the script and it helped Michael as the writer because it allowed for him to be more specific in his writing.

The Dancing Dogs of Dombrova will be screening in Whistler at Cinema 8 on November 30th at 8:00 pm, and the Squamish Lil’wat Cultural Centre on December 1st at 11:30 am. Be sure to check it out as you will really enjoy it.