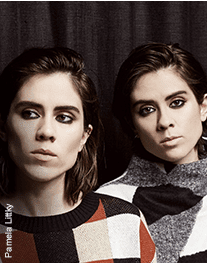 If you’re familiar with pop stars Tegan and Sara Quin, you’ll already know that they’re tremendously talented identical queer twins, activists for the LGBTQ community and now recipients of one of Canada’s prestigious Governor General’s Award. In celebration of this dubious distinction, a portrait in the form of a short film animation was created. It’s informative, it’s inspiring and it features the voices of Tegan and Sara as themselves in cartoon character form.

Accomplished filmmaker Ann Marie Fleming had been giving the incredible privilege of creating the portrait. I was very fortunate to have the opportunity to speak with her about the entire process.

“Has the film been able to screen at many festivals?”

“It actually hasn’t because it was made specifically as a portrait for the Governor General’s Award where Tegan and Sara had won the NAC (National Arts Centre) Award this year. It would have had a festival life but most festivals don’t want films that have already been shown online. For the SPARK Festival, the National Film Board was being presented with an award for Women In Animation for their inclusion of women and their agenda for diversity. It was the perfect place to show this film, which I think is representative of so many things that institution stands for. So no, I have been touring the world with my animated feature, Window Horses. I wish I could’ve seen it earlier but the only audience I’ve seen it with has been with all the attendees for the Governor Award recipients.”

“How did you get involved with this production?”

“This is a commissioned piece and I was approached by Julie Bertusy from the NFB. She’s very aware of my style so I had asked her if she’d be willing to let me use it in the animation, which is perfect because its in stick-work style and suits it very well. It’s all about just being human and having that ability to change and grow and be who you are.  I honestly learned about Tegan and Sara through the making of the film and wouldn’t consider myself part of their demographic particularly. I wasn’t really aware of them as sisters or as queer and I wasn’t familiar with their music or their advocacy work. I did a deep dive and got my masters in Tegan and Sara. I’m now their biggest fan. I’m so impressed with them as human beings and musicians. They’re pretty amazing!”

“We are beyond humbled by the incredible short film that the wildly talented Ann Marie Fleming made about us in honor of our Governor General’s Performing Arts Award.”

“What did the process of creating this production look like?”

“The first process was editing the sound bytes and then making a storyboard before giving it to Kevin Langdale (animator). We’ve collaborated before on many projects. He’s able to add so much to the film, not just visually but conceptually. It’s also very interesting too because he happens to be the father of twins. What’s also interesting is that back in the day I did my masters thesis on twin-ships entitled, It’s Me Again. Although the sisters are very different they do have similar voices, which made editing challenging.” “Considering Tegan and Sara stay quite busy with touring and studio work, did it pose any problems when it came to capturing their voices in the film?”

“They actually have a place in Vancouver, so they’re up here occasionally and it just so happened fortuitously that they were in town at different times. I interviewed them both separately and then cut them together to seem like they were having a conversation in the same room. To also be clear, I did the storyboarding but it was Kevin that did the animation on the project.”

“Did you discuss what was going to be revealed by the sisters before creating the storyline?”

“I had almost two hours of interview material from both of them. A lot of it was the same questions but I really let them talk and I followed along to see which direction they might take it. I’m really not a journalist or an interviewer, I’m a filmmaker. Certainly there were things I wanted to touch on, such as their childhood and music trajectory. You know how it is after an interview; just when you think it went perfectly, you realize after listening back to the audio that the second part of your question may have been in your head. It was a big editing job to listen to it and figure out what would sound like a coherent conversation. Both those women are so open and there are so many interviews of them on the web. In the 20 years of their career they’ve talked to everyone. They’re very consistent with their messaging because they really believe it and they live it. I think they’re incredibly authentic women. What the film is trying to do is make what is still marginally normal. To be able to expand the conversation to introduce their ideas of tolerance to an audience that maybe hasn’t heard them or doesn’t know them. Their fans would be all over this.  I wanted to be able to do something simple and lovely to be able to expand their message. Their work ethic and commitment are amazing.”

“They do have incredible tenacity to commit to 20 years of music. Do you believe that some of that is contributed to their earlier years of standing up for their sexual orientation?”

“In talking to them early on in the film, Tegan states she only has good memories. I think that it wasn’t so much that they were lesbians but more so that they were young women in popular music that had to fight for people to take them seriously. I think the hardest thing is the gender issue and not the sexuality issue.”

“Can you describe your style of animation?”

“My animation is a very simple style. I feel like keeping it simple makes is more universal as well as making it possible for people to identify with the characters no matter where they find themselves or what they might be saying. A girl at the school where I had streamed the film came up to me and said that the style I use has really opened the door for her as a possibility to create work. My animation style is meant to be more inclusive. Not just for an audience but for a potential storyteller watching.”

“Was there ever an intention of making it longer?”

“Unfortunately not, it could only four minutes long excluding the credits. Kevin and I did another portrait for the Governor General back in 2013. Although it was a slightly different style it’s also very simple and line based. It’s a real pleasure to be able to spend the time getting to know the award recipients and gain a deeper knowledge and respect for them. It’s a beautiful assignment. This video is about making people feel safe believing and being who you want to be and not being afraid of that.” “Do you prefer to tell stories through the vehicle of animation?”

“I have gone back and forth. The last ten years has been almost solely animation. For me it’s like another tool in my arsenal. Much like any kind of story when you’re deciding how to express it; is it going to be animated, is it going to be live action, will it be short or long?  I do think it’s an exciting time for animation, especially for long form. It’s always been seen as for children only. We don’t want to exclude children but we do want to make animation bigger. Animation is so powerful because you can talk about tough subjects in universal ways that people are not threatened by. I will continue to work in different forms but I will definitely continue to work in animation.”

“How long did it take to complete the entire project?”

“It was pretty fast. I think the entire turnover was two months. We had a very tight schedule and I had said that we could only do this if they would agree to my style because there was no other way we could animate it differently in that amount of time. The simplicity of the style worked very well with the scenes but also made it possible.”

“Have Tegan and Sara seen the film and what were their thoughts?”

“They did see it at the awards ceremony and seemed to be moved by it. I think they see the film as a great platform to amplify their message about their foundation, tolerance and inclusivity. It’s a win win.”

I have so much admiration for these amazing ladies and think they represent what our great country is about, inclusivity.  To watch this amazing portrait, please visit https://www.nfb.ca/film/short-film-about-tegan-sara/