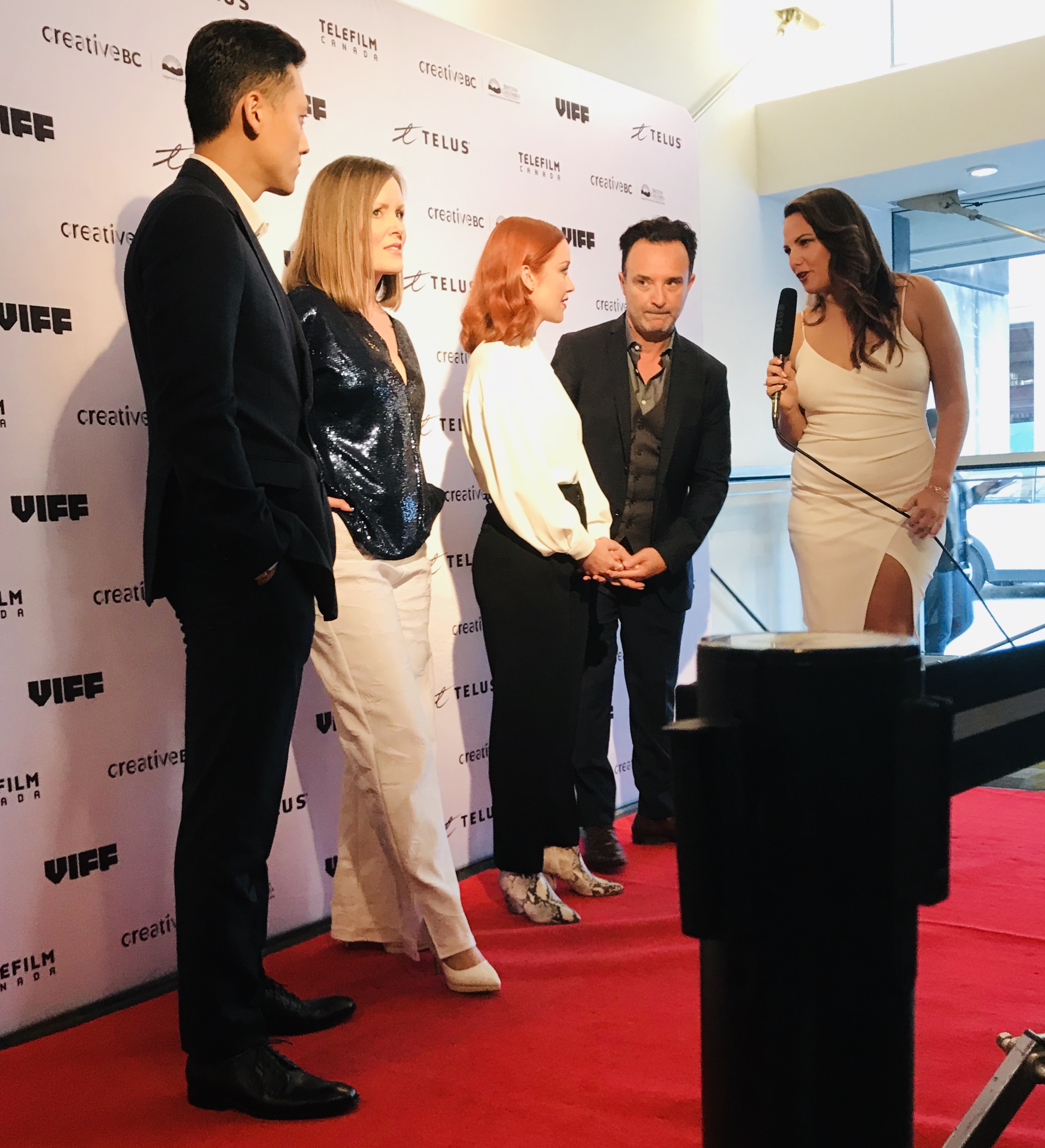 The Vancouver International Film Festival has painted this town red from top to bottom. The excitement continues with the abundance of incubated films showing at multiple venues around Vancouver. Like a castaway discovering his first banana tree, I just can’t get enough. VIFF has so much to offer in thanks to its marvelous team working tirelessly to satisfy all who attend. I’ve had the great pleasure to speak with many of the unsung heroes of this extraordinary event and have been more than impressed with their tenacity to make it the best experience possible. If you take a look at their website www.viff.org/Online/VIFF-2019 you too will be astonished at the selection of films, panels, guest speakers (Michael Moore, Atom Egoyan, Josh Epstein, Marie Clements) and outstanding filmmakers, new and established. The momentum has not slowed down and the excitement keeps building.

I’m on the red carpet at Vancouver’s Playhouse Theatre and waiting for my first guest to arrive. The anticipation grows with every passing minute and the abundance of press stands ready to pounce… in the friendliest non-threatening kind of way. After all, we’re Canadian.

The shuffling of feet can be heard in the distance and I begin to see two bodies coming into focus. Josh Huculiak, producer and Cayne McKenzie – music composer start to walk my way. Their film Ash revolves around a forest fire in the Okanogan and a volunteer firefighter trying to save his town. The firefighter’s efforts are overshadowed by his personal life, where he is found to be a pedophile.

“Hello Josh and hello Cayne. Congratulations on your film Ash. Can you tell me if this story is based on true events?”

“It is actually. It’s based on a man that we grew up with in Peachland, a best friends father.”

“How did you go about researching the facts behind the story?”

“The research came from a lot of interviews the men it happened to as well as different psychologists to unpack the obsessive compulsive disorder.”

“Considering he’s living as a pedophile but also trying to stop a fire to save his town, are you then trying to get the audience to see some redeeming qualities behind his disorder?”

“We’re trying to even the scales, showing what bad people can do and what good people can do. The audience can decide how they feel about the men; there’s good and bad inside all of us.”

“What do you want the audience to walk away with from this film?”

“We want them to be able to test the limits of their own empathy.”

When you hear the term, ‘flipping the script’ I think this is what they’re referring to. I think it’s extremely brave to make a film like this and I also believe a film like this can really teach us more about ourselves and society. If we never look past the violation to understand the psychology, then we may never know how to stop others from violating others and destroying lives. I would love to give my opinion on punishment for pedophiles but this is not my podium.

The next film I was interested in was called Raf. It’s a story about relationships and how people impact each other. It’s written and directed by Harry Cepka and is his first feature film.

“What inspired this film?”

“It was inspired by a relationship. I wanted to express the feeling of euphoria that you feel when you make a new friend and partner in the world. I also wanted to show how those relationships of chemistry and love can be compromised by differences in power between two people and how class, money and status effects the genuine connection between them.”

“What do you want the audience to walk away with after watching your film?”

“I wanted to make broad social issues more personal and for others to consider how we all carry ourselves in relationships and also how various levels of influence and power can be both productive and destructive. I really want to leave the audience thinking about it after the credits stop rolling.”

“What’s the message you want to send in the story?”

“Status is the kind of thing that can block genuine connections and how relationships can move you, change you and impact you. After those people are gone from your life, it’s about how you move on. I also wanted to show the problem with power dynamics in relationships and how it’s tied to societal structures but I also wanted to leave it somewhat ambiguous because life does go on, even when something difficult happens to you, keep moving on.”

“Where did you film it?”

“We shot it in Kitsilano and in Chemainus on Vancouver Island.”

Although this was Harry’s first feature film, he has all the elements of a very thought provoking film. The passion, the intrigue and the story were all there. I look forward to hearing about the awards this film will earn. My next and final guest for the night was Marie Clements (The Road Forward) to discuss her latest film, Red Snow. It’s about an Indigenous Canadian soldier fighting in Afghanistan that is ambushed and captured by the Taliban. Written and directed by this Award winning Indigenous filmmaker, Marie Clements is truly a Canadian jewel that keeps her finger on the pulse of Indigenous issues. She is accompanied by actress and Afghan pop star singer, Mozhdah Jamalzadah.

“Is it your intention to give Indigenous more recognition in the war in Afghanistan?”

“Absolutely, I also wanted to investigate the similarities between two Indigenous people living in different parts of the world and how we connected and how we differed. That was the dialogue.”

My focus soon turned to Mozhdah Jamalzadah who had acted in Red Snow and made the long trip from Afghanistan.

“How did you get involved in this film?”

“I actually got really lucky.  I’m a pop singer back in Afghanistan and Marie had spotted me on Facebook a couple years ago. I’d never acted before and I really wanted to prepare for it, so I got an agent and started getting roles to prepare for being in her film. It’s been a blessing.”

“That’s an amazing story. Do you lend any of your music to the movie soundtrack?”

“I did. I had the honour of being part of the soundtrack.”

“Was the singing coordinated ahead of time?”

Marie answers, “I knew she was a singer and aspiring actress, so it was a little calculated and we waited until after shooting. I was working with the composer Wayne Lavallee and thought Mozhdah would be perfect as a voice in part of the ensemble.”

Mozhdah continues, “It was amazing news to me because I had the chance to play an amazing role in the film as well as being part of the soundtrack.”

“Have people been knocking on your door since your involvement in this film?”

Mozhdah, “Yes, but after being in Red Snow, it’s really hard to top that one. I’m waiting for another one of Marie’s films.”

“What is it about a story that makes you want to turn it into a film?”

“I think there’s a sense of curiosity that wants to see where the story can go and what the themes are but also the drive to get it right and to understand it. I think there’s always stories to tell but you really need to be hungry enough to tell that story.”

It was an extraordinary night, as expected. I am now considering the idea of covering my own floors in red carpet and adding a velvet rope. As the story goes, if you build it, they will come…right?