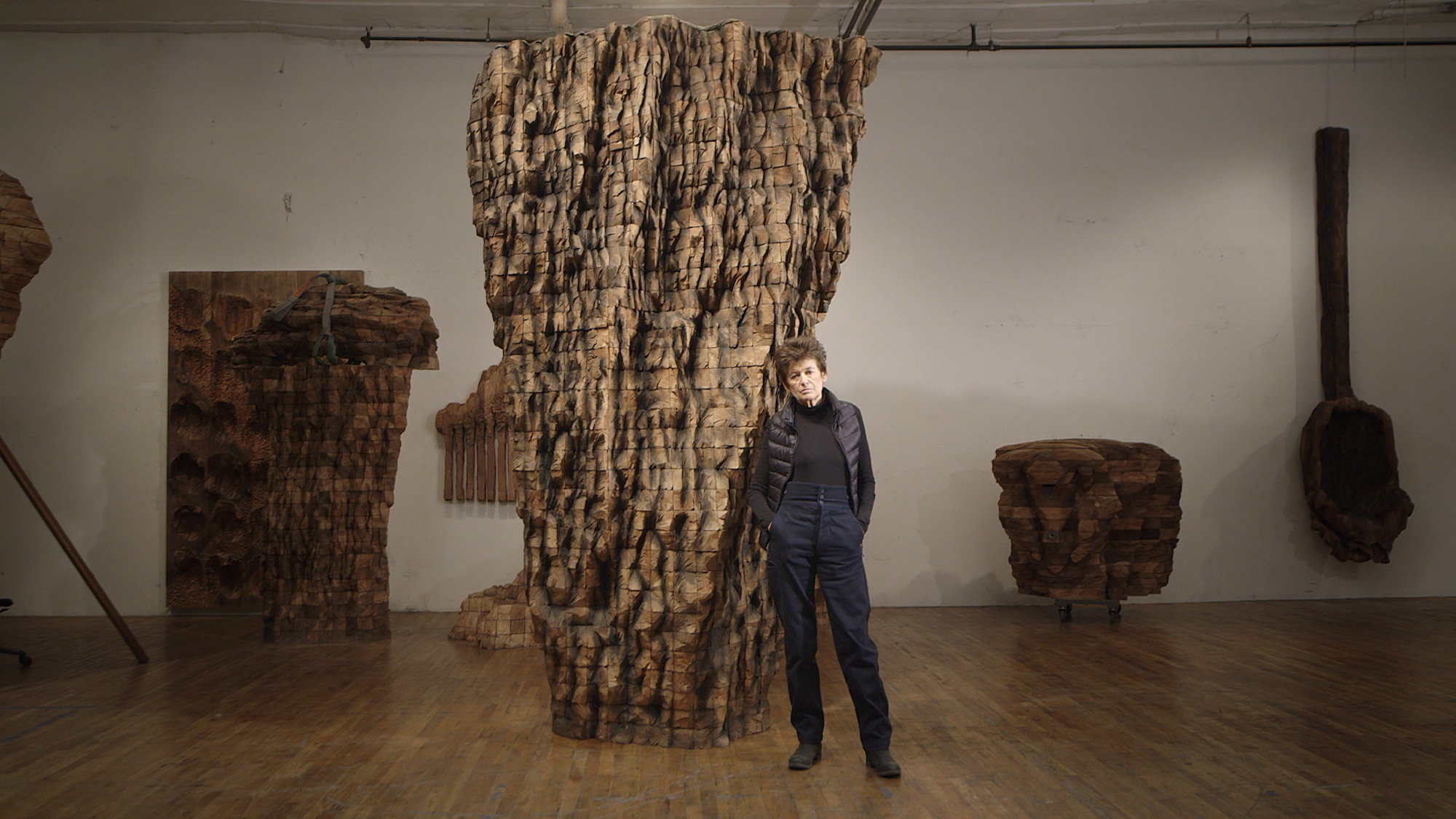 Art is always open to interpretation. On Quebec St. in Vancouver, there is a stack of cars perched on the top of a tree. On the Kingsway median there stands a 108 step tall ladder designed by local artist Khan Lee. Every city has it’s unique pieces that sometimes invite more questions than answers. If you looked at the combined works from each artist, you might discover a theme or you might not. The art is influenced by the artists life and experience. In knowing about their history, it may help to reveal the story behind the piece and how it came to fruition. You might just unlock its mysteries.

One artist that continues to stump her audience is Ursula Von Rydingsvard. Based in New York, her art has captivated its viewers and attracted much interest from around the world. Filmmaker Daniel Traub was also intrigued by her art and inspiration behind it. His latest film, Ursula Von Rydingsvard: Into Her Own is making its premiere at the Vancouver International Film Festival this Friday. I had a unique opportunity to discuss the film with him from his home in New York. As an art lover, I thoroughly enjoyed learning about the process of the film and the art that Ursula creates.

“Out of the list of extraordinary artists that live in New York, what caused you to choose Ursula Von Rydingsvard as the subject for your film?”

“I’ll give you a little background on how it all came about. I initially wasn’t aware of Ursula’s art until she saw a short film that I’d made about the Chinese artist Xu Bing at a museum. At that time she was having an exhibition in Venice and we’d connected through email. A museum in England was hosting here (New York) and kind of taunting the exhibition, so she suggested to them that they commission me to make a short film about the exhibition in Venice.  That was my first introduction to her work and after making the film I got to know her better and know her story. I was really taken back by her work and with her resume, so I’d decided to explore the idea of making a longer film about her. In a strange coincidence her studio was only 10 minutes away from my place. There were a lot of things that made it possible to do.”

“Are her pieces all over the world or are they mostly contained within New York?”

“Mostly in the US but in the last several years she’s had her work in Venice and England. She’s starting to get some exhibits in Europe as well but primarily in the US.”

“In the film, I found Ursula’s art to resemble nature and ancient relics. It looks like it was found somewhere. What was your impression?”

“That’s what drew me to it. There’s something primal about it and it feels like they are part of nature and have always existed. I really wanted to explore where the inspiration came from to make these forms.”

“When you took on this project, did you have an outline in your mind about the beginning, middle and the end of the film?”

“At the time of finishing the first film on her, she was immersed in a project she described as the most complicated and ambitious one of her career. She’d been commissioned by Princeton University to make an outdoor sculpture that she decided to make out of copper. She’d never used it before. I immediately thought it could be a good starting point because it could unfold over a couple of years. My initial idea was to follow this one piece from beginning to end to form the spine of the film. At the end, the piece ended up being smaller and I ended up following several of her pieces, including a bronze work of hers as well as some cedar pieces, which changed the projection slightly. It was the copper piece that had initially gotten me started on it though.”

“In spending so much time with her, did you get a sense of who she was and how she creates a stunning piece of art at the end of every project?”

“Part of what drew me was to understand her process. There is something intuitive and visceral about how she approaches her work. She doesn’t really sketch it out, she kind of dives in and starts cutting the wood. It’s really at indicative and direct process and not really intellectual. Another thing I’ll say is, she doesn’t always make masterpieces. Once a year she’ll have what she calls a big burn where she burns all her failed pieces. I think it’s really a trial and error process where she dives in and follows through with many pieces but I think she also accepts that some pieces won’t work out and will fail.”

“Did you feel limited at anytime in regards to what and what not to reveal about her privately and were there areas you did not tread?”

“To answer your question, yes. The entire process took 4 ½ years and in the beginning Ursula was a little hesitant about making it too personal. She wanted it to be a more professional profile of her work, the process and about her current projects. I felt if the film were to have any weight or length, we’d have to get some of the backstory; some of her early struggles, her history and her early background. It took a couple of years for her to get comfortable and to trust me in opening herself up to different directions.”

“I think the psychology behind her perception of how her art fits into the world is very intriguing. Were you able to understand her thought process in her art in comparison to other artists?”

“I don’t think of it as comparisons really. I’ve made several films on other artists and I take each one on their own terms rather than comparisons. I think what I learned and impressed me was her fearlessness, her drive and determination she has in following her own voice and intuition. I think it’s very powerful and could come from her background. She had started late because she was held back by her first husband and family to some extent. I think she felt like she had to dig deep to become the artist that she felt she needed to be.” “Has Ursula seen the film and if so, what was her reaction?”

“Yes she did, in New York quite recently. She had said that she felt a little exposed because it is personal and delves into areas that are difficult but at the same time I think she feels like it does capture something about her work and her life. I think she’s quite happy with it.”

“In the film you have her daughter, her brother and husband appearing on camera to discuss her work. Were there other family members that you reached out to?”

“Her husband actually passed away six months ago. I had interviewed quite a few of her siblings but it didn’t quite work for the film.”

“Did you approach this artist profile differently from your other films on artists?”

“Not really. I didn’t expect it to take as long as it did, but it’s not that unusual. I’m also a photographer and visual artist so I really have two careers in a sense that tend to run parallel with each other. I learn a lot from following the other artists process and how they go about it.”

“How many hours of footage did you end up with?”

“I think it was between 100 – 200 hours of footage, maybe more. There’s probably about 20-30 versions that we went through in editing and at one point we had a 90 minute version but I felt like it flows and functions better at 60 minutes in terms of the story.”

“Considering you are a photographer, did you operate the camera yourself and what type of camera did you use?”

“I was the cinematographer and I used a Canon C300.”

“Where has the film screened?”

“It will be premiering at VIFF. I’m still waiting to hear from other possible festivals. At the moment we’re in talks with some museums to screen the film there as well.”

“Do you have any other art films planned after this one?”

“I’m thinking of a few different ideas but nothing is solidified yet.”

Daniel Traub has really created art about art in this film. The images are spectacular and act as a guide through the jumble of creation. If you are an art lover and want to have your mind blown, then please attend the premiere of Ursula Von Rydinsvard: Into Her Own to better understand the artist’s process and vision behind her many incredible pieces. It is a window you won’t want to close.