Currently happening in Toronto is the Caribbean Tales International Film Festival, or CTFF. It’s another one of those hybrid festivals both in-person and online, because I’m sure we all know there are some people who are still trying to stay indoors. One of the films screening this year is the feature Opal, which is a fairy tale style of film about a young princess who is sure to bring joy not just to the kingdom she lives in, but to the hearts of many people. But she may also bring misery there as well depending on her mood. Poor little Opal has gone through some tough times involving incest which is a big but touchy and VERY important subject that sometimes needs to be discussed, but in a super appropriate manner. This film provides a great message that kids and parents can talk about both after the movie and some time later on if they choose to. Not only that, despite its somewhat dark nature, it also brings the viewers on an animated visit to the Caribbean itself, where they can learn about culture, food, and what life is like down there.

Alain Bidard had lots to talk about regarding this film and more details, so I just had to speak with him and learn more about the film as well as what he thinks about Canadian film culture. I learned a lot about culture in the Caribbean thanks to both Alain and his film. Now sit back for a journey as we go through the trees of tales and down the stream of storytelling where we will discover important treasures in this interview.

HNMAG: Your film will be screening at CTFF this year. How do you feel to have it screened at such an important festival?

Alain Bidard: It’s really great, I am really honoured to be able to have my film in CTFF, and I am happy to return to the festival because my first feature was screened at the same festival 6 years ago. I really had a great time with the festival so its really amazing to be back.

HNMAG: so you’ll be attending yourself. Do you plan to see what other content is screening there?

Alain Bidard: Yeah, I intend to see the other content, but I haven’t had the time to check what else there is yet. From what I heard, there is going to be a lot of great films.

HNMAG: It must be pretty exciting.

Alain Bidard: Yes, I heard there are going to be some films from other groups. It’s really interesting because generally in context of the Caribbean, it’s really great to see it in the big country with international reach.

HNMAG: I understand that Opal is a fairytale. Did you come up with it yourself or was it based off another story?

Alain Bidard: I created the story myself, it was not based off a story of someone. Let’s say a lot of stories from people inspired me and the situation of the legislation of child abuse in France inspired me. I’ve met a lot of people who have been abused and Opal is a mix of all those stories. There’s not really one that is more potent than the others, but it’s a mix of everything.

HNMAG: What do you hope audience will learn from such an amazing film?

Alain Bidard: I hope the audience is going to be able to connect with the character to understand what she’s going through, to understand the characteristics of this type of pain and trauma. Maybe they’ll find a solution for people they know in this type of case, even for themselves, certainly. For general people who haven’t experienced that, it’s going to help them to have a better understanding of what it is, why we need to fight against it.

Alain told me that for his first idea for a film, he thought about the flu, and how we know what it’s about whether we have it or not. He described that’s a good way to also talk about incest because it’s not well known and there’s lot of fake controversy about it.

HNMAG: It can be a bit of a touchy subject, how did you address it while avoiding boundaries?

Alain Bidard: I wanted to create a film that would be able to impact young people and adults, I didn’t want to create a thing that made people uncomfortable, so there were some aspects that I had to work a lot on. One of this aspects was hiding any type of sexuality and sensuality. Being able to take the story in another kind of place but keeping the same kind of pain. Not showing traumatic things, and not talking about incest directly. Let the audience make the connection by themselves. 15 years ago I made a short film about incest and it was the same title, but not same story. I wanted the story to be heard by young people but the trauma was too much and the parents were uncomfortable. During the screening, the kids were asking lots of questions because they didn’t understand. Based on that experience, I worked to create a story where parents would understand what is going on but children understand a different type of story more with what we are used to seeing with Disney. A princess story in the magic world, but they will see some symbolism that gives them some indication that it was happening to a friend or in case it was happening to them. It was a challenge because I didn’t know it would succeed. In this regard, I’m really satisfied by this experience.

HNMAG: Why did you choose animation over live action?

Alain Bidard: I’ve been trained for making animated films, so it’s a kind of second nature. I grew up in the 90’s when we had Akira, films from Yakuza, Ghost in the Shell, so it was a time when a lot of directors mostly from Japan were trying to make animation. With that, I grew up thinking there were some subject that matter that we can talk about in context of animated film. I had the opportunity to work on live action, but in the case of feature films, I never had the opportunity to do so.

HNMAG: Have you had any of your other works play at Canadian film festivals?

Alain Bidard: I had my first feature film in Fantasia, and the Memorial Blackfeet Festival as well. I had a number of short films, most of them being animated and my 2nd feature film too.

HNMAG: Let’s talk a little more about your films. Have you had anything of yours made in Canada?

Alain Bidard: In 2016, I’ve been invited to submit to CTFF for the pitch contest. The idea was to adapt my first feature into a television series. That was the first time I had a deal with networking flow and they wanted to try to go into the direction of Netflix originals. I remember that there was one other project that’s been sent, and mine was one of the ten projects that had been shortlisted. I’ve also been invited to go to Toronto to meet a lot of professionals, and during one week they had this bootcamp where we would meet everybody. Every day, the contestants would have to pitch where the festival was happening, we had to pitch our proposal to a lot of producers and tv channels. I had the opportunity to win two awards: The Audience Award and Best Pitch. With that, we started collaboration for making the pilot of a series that lasted one year. 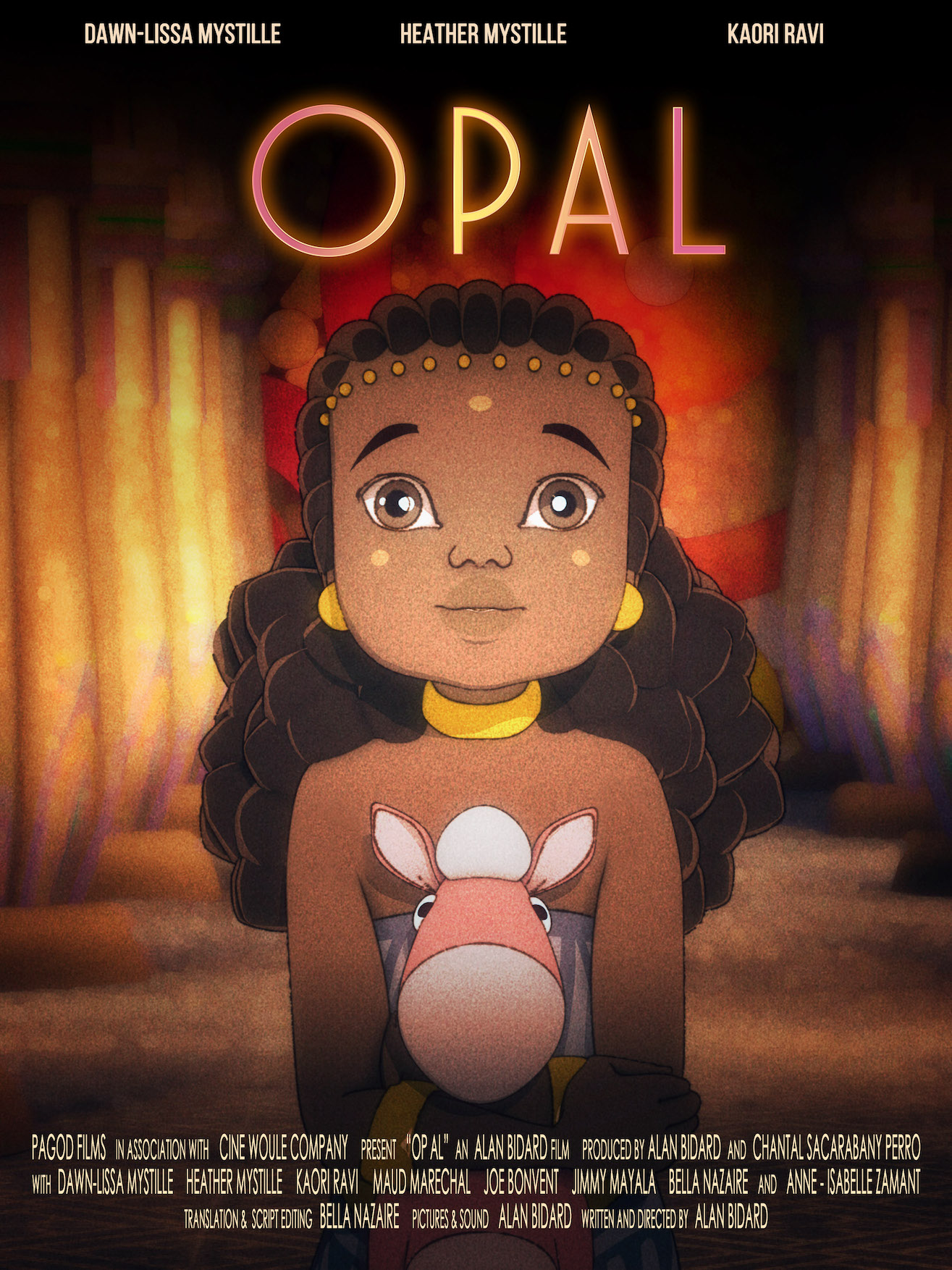 Aiden had managed to make 3 or 4 series with a director and things looked promising with the production company they worked with. Unfortunately, nothing lasts forever, as the company lost a lot of money and ended up getting bought by a bigger studio from England. The new owners said they didn’t want to keep going in the direction of TV series but do something different. Still Aiden described his time working there as  “A really interesting experience to work with.”

HNMAG: Do you hope to make more Canadian content in the future?

Alain Bidard: I would love that, especially because Canada is one big country and the biggest provider of animation. It’s worth it because there are a lot of things to do with Canada, and I hope that I will be able to be able to work with them.

HNMAG: From where you’re located, what have you noticed about the Canadian film industry?

Alain Bidard: From a French perspective, we don’t have an independent cinema industry, so the government gives the money. Whenever we have to screen a film or to put it in the theatre, it’s always going to be the government’s rule so we are going to have go through administrative things. In Canada, we have a mix of that and the freedom in United States where maybe the government is helping less. But there is a freedom for the industry and you really have an independent industry that is flourishing. In this regard, I really think the Canadian industry is interesting for creating new content.

Alain Bidard: The Caribbean content is a bit more based on their history. We have to sort a lot of things, because there’s a lot of things that aren’t working in the Caribbean. There are a lot of problems in the society, and the cinema comes as a way to scream to the world that we have these problems and there may be a possibility for all the generations to see that there is a problem and we have to fix it. It’s really a Utilitarian type of content. In Canada, I believe from what I saw it’s really well-mixed. They’re not trying to save the world through their film, like we do. They make films and the films can really spread the wings by themselves. They’re the type to read into history, and I’m pretty sure there is a lot of characteristics in the culture and social life of Canada in every film. But it’s less important than in Caribbean films but still interesting to see.

HNMAG: Do you have any favourite films from Canada?

Alain Bidard: One film that was called Cube, it’s a science fiction and I was amazed by the way people went to create an amazing story. A very small budget, very limited vocation, and I talk about Cube because it really taught me to make sense in my own films and how to save money. What could work that we didn’t have to create big things.

HNMAG: And do you think Opal is receiving great countrywide recognition through Canada?

Alain Bidard: Yes, I didn’t expect the film to have success so it’s really nice. The film so far was seen in 96 festivals, worldwide. It won 60 awards, so that was really a surprise, because I never had this kind of result before with my previous films. It’s really scattered, really everywhere so that’s really interesting. A lot of places and festivals give me the potency to present this film.

So it seems like this film is already doing great. Not just North America, but Brazil, Venezuela, and lots of places. Maybe it has reached Britain by now. Anyways, there’s still a week of CTFF left, so log in today and watch Opal. You might be amazed at what you find about and here’s hoping Aiden’s other films are just as successful, maybe even more successful.