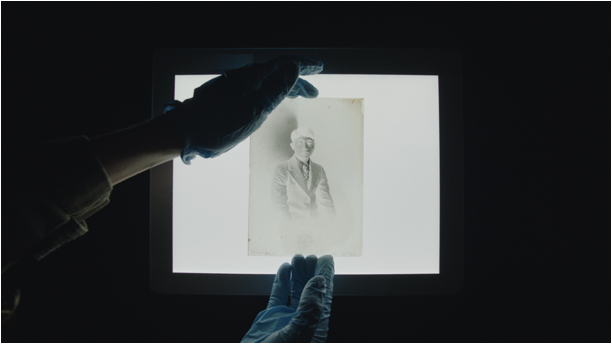 The sordid story of WWII-era Japanese internment in Canada is well documented. It’s a dark mark on our history not only for the egregious violation of civil rights, but the virtual erasure of thriving communities all across BC. Most Japanese families didn’t bother to bring photos among the meager possessions they brought to the camps and most refused to speak about pre-internment times afterward.

Outside a few major urban centres, most Japanese communities have been erased from the map. But one unexpected lens into this uncharted past has surfaced in Cumberland BC where the local Museum has archived over 700 glass plate negatives from a turn of the 20th century photo studio run by Senjiro Hayashi. Taken over several decades, these photos offer a glimpse into the diverse community (Chinese and Indigenous as well as Japanese) who lived alongside largely European settlers in the still relatively-young Canada.

A group of BC filmmakers have taken it upon themselves to bring these photos to a wider audience with their new doc Hayashi Studio. I recently caught up with writer/director Hayley Gray and producer/editor Elad Tzadok in Vancouver:

HAYLEY: I’ve been working with a friend, Laura Cuthbert who’s an anthropologist who studies ghost towns throughout BC. She kept saying there was something really cool about Cumberland; the way they document, the way they curate their museum and everything and that we had to see it.

When I got to the Cumberland Museum, I was just so struck with Hayashi’s photos and was like “I need to know how this happened.” You know history isn’t documented equally and you know there are diverse voices missing but when you see those communities so vividly captured by someone from that community it really sinks in in a way it hadn’t before.

A memorable moment from the doc features two elementary class photos, one from pre-internment and one from after with all the Japanese students missing.

ELAD: It’s interesting because when you do talk to people who were there at the time from the community, you see how much that also impacted not only the people that left after internment, but the community members that stayed and how much of an effect that had.

How did you go about gathering your interview subjects?

HAYLEY: After seeing the photos, I tried to get in touch with the Cumberland museum, but they weren’t really available so I ended up calling the Nikkei Centre regularly and they were like “We’re a little busy but we’ll send you to Grace because she curated the photos in the first place.” The first stuff I had was hanging out with Grace Eiko Thompson and her little apartment. She had the same obsession with the photos that I did.

She also had heard of the Hayashis before and thought she might’ve met a couple of them and researched this to create a photo book about all these different Japanese photographers, but it all started with her in Cumberland.

From there, I managed to get in contact with the Cumberland Museum and start connecting with them. Then using all of the little bits and pieces Grace shared with me, I found the emails for the Matsubuchis so wrote them. Then I found one of the Hayashis on Facebook.

Doug was an interesting one where I posted one of his family’s photos without ever knowing him and all, on Instagram and my friend Jay was like “Hey, That’s my friend’s Dad!”. That’s how Doug (Sadao Aoki) came into the picture. We just emailed back and forth a bit and he was on a family trip to Vancouver so we got coffee with him. He was like “Okay, you don’t seem evil. We can make this movie.”

That’s the magic of networking.

HAYLEY: Yeah, totally. It was crazy because none of the other Hayashis were on Facebook. There was one other, but he was under a total pseudonym So I’d have no idea who he was.

ELAD: It was one of those things where the movie wasn’t really there until you got in contact with Doug and it became what it became very quickly from that point on.

HAYLEY: Yeah with Doug I think it became really clear and kept getting clearer for us that so many people from the Japanese community, their parents didn’t talk about life before internment. They barely knew where their parents were from.

ELAD: It’s been a thing we keep on telling ourselves throughout the process of making this is that this isn’t a film about internment. This is a film about the 60-70-odd years leading up to it and all that loss of culture and history that’s gone from that community and that is still trying to find itself now.

Have you heard of any similar discoveries of archival photos in other communities?

HAYLEY: Yeah, little bits and pieces (but) not in the same way. So Chow Dong Hoy was in Barkerville and he was a Chinese photographer. And it’s really interesting to see the Indigenous and Chinese and settler community there. But we haven’t come across…there are other Japanese photographers in Vancouver, in New Westminster. We haven’t come across other ones outside of the lower mainland. But we have been looking at other ways to chart that.

ELAD: I think what’s unique about the Hayashi collection is the sheer volume because the studio was just basically abandoned and they left everything there. It was kinda left…not entirely untouched, but there’s a collection of over 700 glass negatives that were there and were fairly intact by the end of it. But you don’t really have a comparison the same way.

HAYLEY: And I think for me too, the studio was so beautifully set up. The photos were taken with such care, you know they weren’t news report photos. I mean that being said, we’re looking at potentially developing a series looking at other diverse photographers throughout BC.

Which leads into my next question: are there plans to produce a series of similar programs?

HAYLEY: 500%! So we have kinda two strains to that. One is as of last week, we just got into development for a feature film with the NFB which is specifically called “Unarchived” and looks at a bunch of different stories including actually the Chinese communities on Vancouver Island starting with Nanaimo because there’s a lot of research on the Nanaimo Chinese community. So that’s kinda one piece of that.

And then I do think that like, framing it through a photographer is a really interesting way to not only look at communities, but unpack how we get to know about history. One of the stories I really love that Grace wants to do is Leonard Frank who was this German-Jewish photographer who took some of the most important photos throughout Vancouver’s early history. When internment happened, he came out of retirement because he knew what was happening in Germany and he wanted to make sure that this internment was documented. So the reason that we have stark realistic photos of Canadian internment is because of Leonard Frank.

What was your experience working under STORYHIVE?

HAYLEY: We’d both done at least one Storyhive that we’d directed and produced before. I think it was actually really lovely. We had so many people come up to us throughout the training process and be like “I’m really excited about this story. I think it’s a really important story to tell.”

We had an amazing mentor Jason Margolis. He was really thoughtful and his background was specifically on archival photos and video in documentary. So he had a really keen eye for how to showcase that in a captivating and ethical way.

Honestly, I really appreciated that this film, I didn’t feel we had to push it for votes. It felt like the jury was going to lead the decision-making. So we kinda just tapped into what was important with the project and didn’t get too hyped up on asking a million people to vote.

ELAD: I think from a process standpoint, it was really nice to see how they’ve been supporting filmmakers and how they’ve kinda done a lot of work into getting a mentorship program that really works to develop the projects and invest in them and get the right people to support each project.

What do you hope audiences take away from this?

HAYLEY: My biggest takeaway is that Cumberland is one place, but there were hundreds of Japanese, Chinese and Black communities in BC that we know nothing about and that’s really crazy.

ELAD: I hope people walk away from the film re-examining history, re-examining their own past. That would be amazing. I think there is sort of a level of complacency with the narrative that we tell ourselves about our past. Giving people the opportunity to stop and think about that for a minute is what I hope to achieve.

HAYLEY: And I hope we’ve been clear enough about the process that people know that you don’t just have to rely on a history documentary or a textbook to go find out what happened in your communities. Most rural archives and the federal archives are open. You can go look at those and you can investigate for yourself. Almost all of Hayashi’s photos are digitized on their (Cumberland Museum’s) flickr account and you can pour through their thousands of photos.

Hayashi Studio is now available to view on YouTube HERE