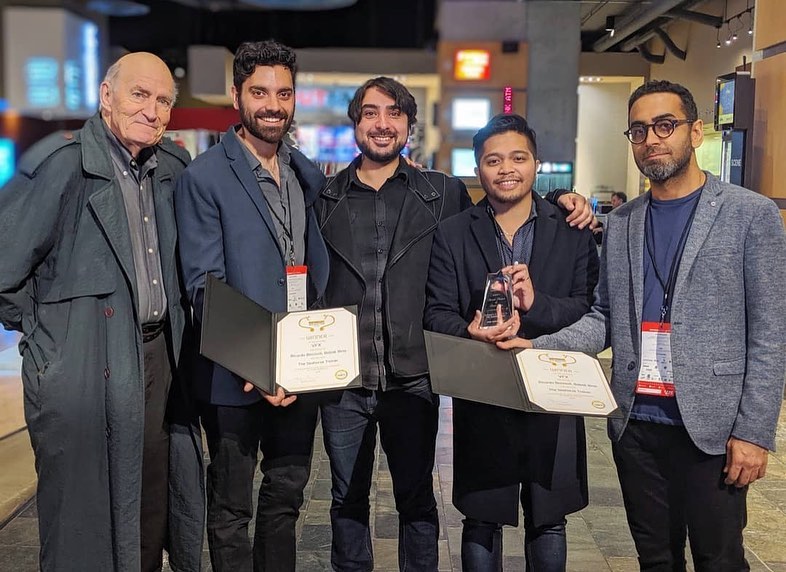 Original concept by definition means to think outside the box with untapped creativity that we’ve not seen before. As a movie fan I’m always anticipating something new that will knock my socks off. I am pleased to say, that has finally happened. Having attended the very recent SPARK Animation festival, I had the astounding privilege to watch the film The Seahorse Trainer. It is so original and brilliant, as well as entertaining for the entire family. The film is part fantasy and part surrealism that depicts an older gentlemen training seahorses to perform tricks in his home. The images truly jump off the screen and you begin to believe that the underground art of seahorse training actually exists. The film is a short but leaves you totally satisfied with its full platter of creative marvel.

Before watching the film I had spoken in depth with the two directors of the film, Babak Bina and Ricardo Bonisoli. I had also spoken briefly with the very talented producer Rodmon Sevilla but there wasn’t time for an interview, so Babak and Ricardo filled me in on the entire process of the films creation.

“How did you both get involved in the film and who wrote it?”

“The three of us wrote the story and Rodmon Sevilla also produced it.”

“Why did the film require two directors?”

“This was our first film and it was quite new for us, so we wanted to make a film that we would like. We have a similar style and always wanted to work together. We weren’t setting out to make a short film but it developed into one. Both of us have been heavily involved in every aspect of it, from concept design to storyboarding and even the design of the poster but it was the brainchild of all three of us.”

“Can you tell me about your backgrounds?”

Babak: “I studied civil engineering and IT in Iran before coming to Canada in 2004 to study graphic design, sculpture and 3D animation. After that I began working in the TV industry, mostly on children’s shows. I wanted to get involved in film, so I began working in visual effects. I met Ricardo there in 2014 and a year later we both left to work for other companies. Since then I’ve been working as a visual effects artist and The Seahorse Trainer was our site project. We’ve been working on it in our spare time, weekends and it’s been ongoing for over 2 years. All three of us work as fulltime visual effects artists.”

Ricardo: “My background is mostly in illustration, drawing and graphic media. I’ve always wanted to keep expanding my knowledge and learn more about 3D so that brought me to Vancouver Film School. I had met a lot of people there and made some great contacts. After leaving I started working in the visual effects industry and Animatics. Together with Babak we began creating assets, characters and building realistic figures. We were involved in the building stage of the entire process.”

“How many animators were involved in the film?”

“We had one animator supervisor overseeing his team of 5 animators. People were working on their own free time so we were very grateful to have so much help on the project and were very patient.”

“Did most of the people volunteer to work on the film?”

“For the visual effects, almost everyone volunteered. Working in the visual effects industry helped us to find people that were interested in volunteering on the film. They liked the story and the film, although most of them are working full time. Alejandro Mozquedo for example is one of the animators that helped us so much in seeing the project through to the end.”

“What is the major difference between directing film and directing animation?”

“This is our first experience directing at all. As a craft, animation is more familiar to us, so you can sit in front of the computer and tweak stuff over and over but when you’re directing people on set, you can only do so many takes. On set I believe you need to be more in sync and more in the moment. You only have people for a limited time but in animation you can always go back and fix it multiple times.”

“Do you have any well known voices in the film?”

“There’s no dialogue or monologue in the film. There’s only music and sound.” “What type of music is in the film, possibly orchestra or symphony?”

“The music is tailored for the film and it was created by a composer living in San Francisco that plays multiple instruments and has composed for other films. There are times when he plays unconventional instruments, such as a musical saw. He’s known for playing many strange instruments, which is why we liked his work and approached him. We didn’t use any pre-recorded music and the music that was created is actually married to the images in the film. He used violin, piano, musical saw and percussion instruments.”

“Was The Seahorse Trainer inspired by horse racing or horse ranching?”

“Not really, it was inspired more from portraying the story of a very eccentric man and what he does in his home. It’s about his passion and obsession for training seahorses. We made all the seahorses in 3D.”

Incidentally, seahorses range in size from .06 inches to 14 inches.

“Would you say that this is a family friendly film?”

“We think so, although it’s a little strange there’s nothing to worry about. It’s a surreal/fantasy film. There’s nothing violent about it but it hasn’t been rated yet.”

“Considering this is your first directing experience in animation, would you do it again?”

“Absolutely, we learned so much and discovered such a beautiful process being able to collaborate with so many different artists and disciplines. I cannot think of anything better than doing another film?”

“Do you have your next project in mind?”

“We’re developing a couple of ideas but it’s still a little early. We currently still busy presenting this film at festivals and still working full time. Because we had Indigogo backers we’re still having to provide them with their perks, which is another task we’re working on.”

“Are you able to mention the budget that went into the project?”

“We did have an original budget of twenty thousand but that kept changing. There were a few unexpected things that happened, such as losing a couple cameras and a Gopro that failed. There was the cost of submitting the film to festivals and marketing. I’d say the cost grew to twenty five thousand.”

“Where does the film go from here?”

“Apart from this, Paris, Tokyo and we have a screening at a festival in Utah. We’ve heard that it’s a waiting process once it’s submitted and can take awhile to hear back. We also have a sales agent that’s trying to sell the film Internationally. Possibly on airline flights or cable TV, really any TV programs showing short films or VOD.”

I believe this film has great legs and the actors’ interaction with the seahorses is quite remarkable. His name is John R. Taylor and the music composer is Dan Cantrell. At the SPARK Animation Awards ceremony, it won Best VFX and the two directors also walked away with the Rising Star Award. This film is inspiring to anyone seeking a career in animation, especially 3D animation and should foster imagination to create more original projects in the future.