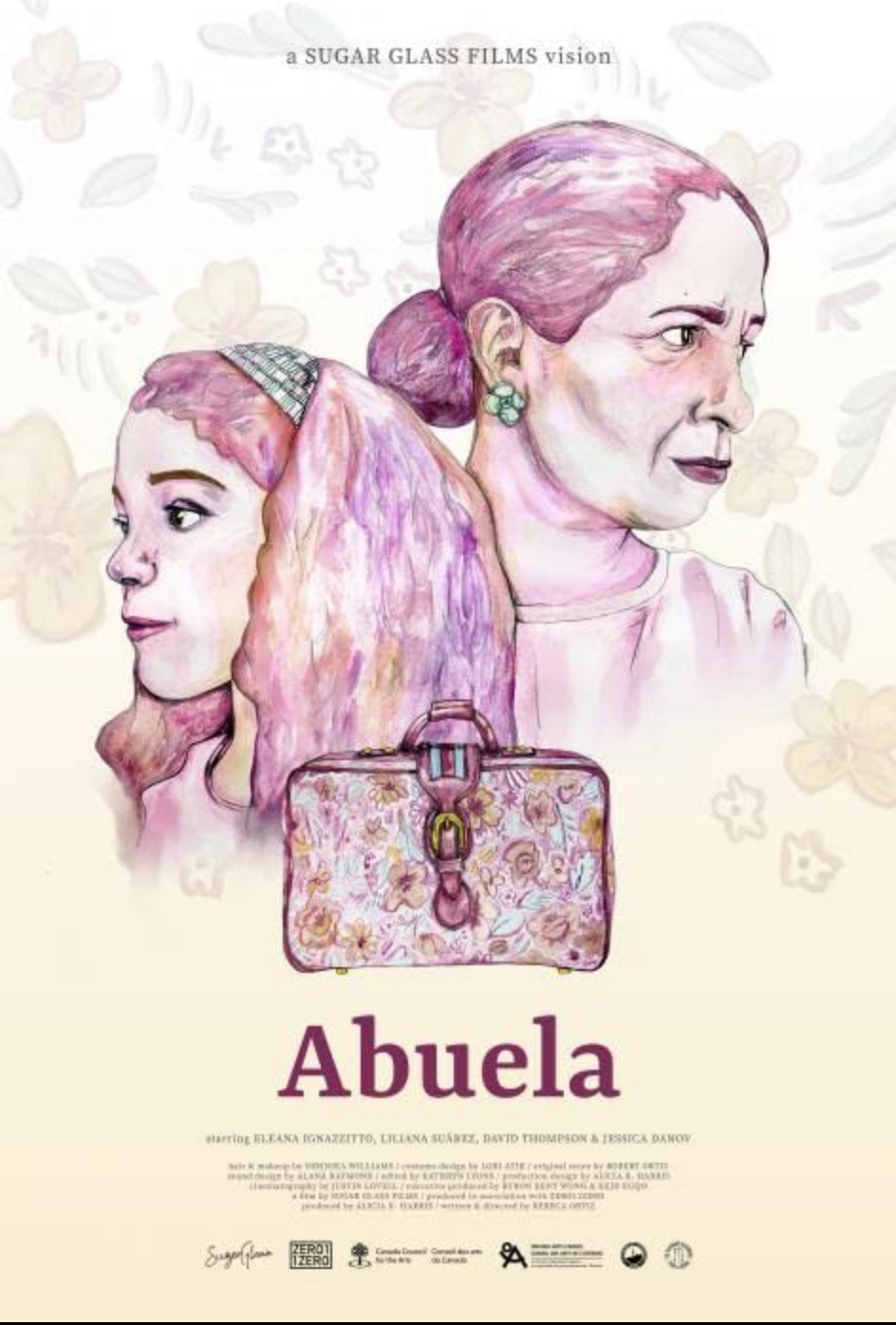 The bond between a grandparent and grandchild can be unbreakable, incredibly special and quite knowledgeable. The memories last a lifetime and the stories are passed on through generations. Another thing passed down through generations are recipes. Cooking together with a grandparent can be an epic event, especially when the time is short and you live apart in another country. You make the time count and you cherish it like a gift. Abuela is a film that explores the relationship between granddaughter and grandmother/Abuela.

The film is written and directed by Rebeca Ortiz and it’s inspired by true events. This is the first narrative film that Rebeca has written and directed. She does a superb job and brings much experience to the table in terms of producing a number of short documentary films (Love Stinks, Pick). Abuela has been doing very well at the festivals and the run continues as it makes its way across the country.

I was incredibly fortunate to catch up with Rebeca Ortiz at her home in Toronto. It was fun, it was inspiring and I forgot to get that empanada recipe… ugh. Roll the tape!

HNMAG “Great film, Rebeca. I related to this film and it brought back early childhood memories. Can you tell me how this story was inspired?”

REBECA “I wrote this film back in 2017. My dad is from Chile and came to Canada during the dictatorship in the early ‘80’s.  My mom is Canadian, born in Brampton, Ontario and still lives in the same house with my dad, which I find interesting. The reason I wrote this was because growing up, I had only met my Abuela a few times. She’s still alive by the way and is 90. She’d come to visit or we’d go to Chile to visit her every 5 or 6 years. I didn’t know the language but I would pick up a couple words here and there. My dad never taught me because it was easier to try and communicate through English, since my mom also spoke English and he spoke both. After my dad moved here, he started his own business and worked 6 days a week, so he also never had the time to teach me. I found it interesting that we had this strong bond, even though I didn’t get to see her often and we didn’t speak the same language. Including the age difference, I found that dynamic really interesting. That’s really where this story came from – a strong bond with someone that lived so far away from me that I didn’t see often. It spiralled from there and this film is inspired by that. The story is just the start of the relationship and where it could lead to.”

HNMAG “There is a scene where you are baking with your Abuela. Did you do much baking with her, when she would come to visit?”

REBECA “Yes, I did, however it’s different now that she’s older and doesn’t have the ability to cook the way she used to. A lot of cultural experiences are similar and tend to revolve around cooking. It is such a big part of her identity and she would spend hours and hours preparing a meal. In the film, we’re making empanadas – there are many different varieties out there in the world and in Latin/South America. For some of these dishes, it might take 1 or 2 days to prep the meal, working with the ingredients/meat. I was wishing I had my Abuela there to do all the specifics. I feel like my film doesn’t fully exhibit the magical experience it is to watch her as she prepares food, its second nature for her. I’d watch her make the dough, starting with a bunch of flour and shape it into a big volcano, then pour hot water down the top… you’d see it go through. It was so cool, it’s like watching art.”

HNMAG “I think it’s wonderful that you were able to use food as a conduit to bridge the generation gap. How long did it take to film this short movie?”

REBECA “We shot it over the course of 3 days. It was definitely a labour of love and it’s the first narrative film that I’ve written and directed, so it was a big moment for me. Prior to this, I’d only made documentaries. My entire family was there to help out, my brother, my mom, my dad and my aunt from Chile that still lives here. If you look at the credits, she’s the empanada expert. She prepared all the dough and got all the props ready. I wanted to ensure that it was as accurate as possible, she even demonstrated how to kneed the dough for the actress. We used the home of one of my dad’s long-time customers of 30 years. She welcomed us in, it was great.”

HNMAG “So happy to hear that you had so much help on this film. Did you finance it on your own?”

REBECA “No, actually the way that we started was by reaching out for sponsorship. The first sponsor we got was a production company, 0110 which is out of Toronto and run by Byron Wong. Byron and Kejd Kuqo acted as executive producers and they really believed in the script. They helped to find us a cinematographer (Justin Lovell), who is amazing. We had access to all their equipment and all their resources. It was our starting point and it saved us on so many costs. All of the crew had volunteered, it was my first project out of school. We also had food donated to us by this amazing woman, Anne Sarente that owns the Oakwood Hardware Café, which is in Toronto. I believe she supplied us meals for the 3 days, it was great! There was also Latina’s in Toronto, which is a Facebook group that we reached out to. They have a radio station that Cesar Szoudwaga runs. He understands independent artists and was on board to do it. He had me on his show and also supported us with some funds. In addition to that, we were also able to secure some funding from both the Canada Arts Council (Emerging Creators Fund) and from the Ontario Arts Council. It was a lot of work in creating a sponsorship package, but we really went with grassroots methods. It was a bit of an amalgamation to find the funding but we’re so proud to make it happen and are so thankful to all the people that volunteered. At the end of the day, most of the work is the labour and its not something that I like to ask people to do for free. I’d rather be paying everyone.”

HNMAG “When did you start prepping for this film?”

REBECA “I wrote it in 2017 but we didn’t shoot it until May of 2019. In between that I was serving and bartending at my job. I would say that we actually started to prep closer to the end of 2018 to be ready for the May shoot.”

HNMAG “I enjoyed the film, you did a phenomenal job on it. Where did you find the little girl actor?”

REBECA “We put a huge posting out there and I believe we found her in a casting workbook. I think we also found Mandy on a casting website. We posted it all over social media and again, grassroots. She was pretty special – a little shy, just like the character. She was very sweet and it was the first time she acted and a first, being on set. She did a great job and was able to be herself. The dynamic between her and the Abuela was so natural. Liliana (Abuela) did theatre in Columbia, she’s done TV, she’s been in so much. She had that Abuela energy – very open and loving.”

HNMAG “It did seem very natural indeed. I thought they knew each other. Where does the film go next?”

REBECA “We have a Feature Film Showcase coming up on Friday, June 17 at 7 pm. After that we’ll be continuing with the festival circuit but we’re trying to find a place where it can live online and people can access it across Canada. That’s the plan and you can follow me on Instagram at Becahecka or Abuelashortfilm if you want to find out what we’re doing (laughing).”

Ortiz’s brother wrote the song playing as they’re making the food. Rebeca adds, “The song in the credits was written by me and my dad in Spanish – which I’ve since learned, so if you listen closely, you’ll hear my Spanish voice, it was a lot of fun (laughing).”

Rebeca Ortiz really went the extra mile and raised the bar in capturing a moment in her childhood and bringing it to the screen. It’s a story many of us can relate to and it can feel like a warm hug from that grandparent. It may also inspire you to dust off an old recipe or two. Films have a way of stirring up memories and thoughts. You had put away long ago and Ortiz makes it look easy – like an old recipe.