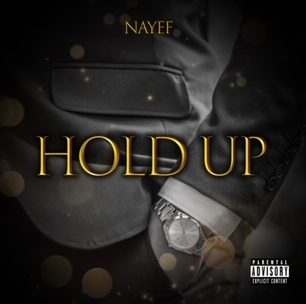 When you’re young, it’s not easy to realize that the world is your oyster. If I only knew then what I know now, life would be so much easier… but sometimes it’s the struggle that makes for great stories and great music. NAYEF (Christopher Nayef Saghbini) is one example of making music from struggle. He was bullied in school, partly due to being Lebanese, but he learned to put those feelings into his music – now, it is allowing him to live the dream, as a recording artist. Music has always been a source of peace for NAYEF.

HOLD UP, echoes Nayef’s journey through the music industry. Although this talented hip hop artist has taken the stage with the likes of Peter Jackson, Young Stitch and Kingcon, this video expresses that journey – from darkness, into the light while portraying life on the other side – with the achievements and trappings of a different lifestyle. One, that Nayef wanted to make clear, doesn’t change who you are, unless you let it.

‘Staying true to myself, fuels my music.’

Hold UP landed March 4th and it is off the hook… even for an old guy like me.

HNM “Congratulations on your new single Hold Up launching March 4. Can you tell me about the song and how it differs from your previous music?”

NAYEF “Hold Up is smooth with singing, it has a groove to it. It’s way different from my ‘old style’ as I call it. I’ve completely switched the way I rap – before it was showing how good I could shout this line with that verse and now I make songs, actual music that I’m hoping will be timeless, as opposed to me showing off. Anybody that I’ve shown this video too, has said it was much more me, than making hard rap with bars. I’m really excited, Hold Up is the first single I’ve released with my new style. It’s going to be followed by Roll With Me, which is dropping in April, with the video. I’ve got approx. 60 new unreleased songs in the new style, with more coming this year.”

HNM “You’re making all this music in your spare time, while holding down a full-time job – is that right?”

NAYEF “Yes. I wake up, go to work till 4 pm, pick my kid from daycare, chill with them till 8 pm, put him to bed then I go down to my basement, where I have my studio – to work on things or I’ll go to my producer’s place and work on some things there. Of course, you still need your personal time, so instead of working on music I’ll play video games or watch some Anime.”

HNM “What is Hold Up about and what is the message in the song?”

NAYEF “If you watch the video, we’re in a mansion and wearing nice clothes but we’re playing Nintendo 64 and eating Popeye’s chicken. It’s portraying the life that we built up to, but not necessarily where we came from. We don’t live the lifestyle, but we made it here.”

HNM “How did you come up with the concept of the video?”

NAYEF “It kind of built up on it’s own. It originally started with a simple idea of having a nice location, we’ll all be dressed well, very exquisite. We were originally going to do a steak dinner, then Chad Orchid (video director) said – ‘instead of a steak dinner, why don’t we get some greasy food, like Popeyes or something similar’ and from there I had developed the idea of being in this big mansion expecting to be doing other things. It wasn’t until I started grabbing props for the video and going through some items and thought the N 64 would be cool, I brought a mic I was using in front of the piano… it was so cool, the video had such a good vibe.”

HNM “Have you worked together before on videos?”

NAYEF “I have, if you go to my Youtube… there’s another one called, Chapter and there’s a few more we did when I went by the name, C Note. Chapter was the first of a more professional series of music videos.”

HNM “You were bullied in school, which caused you to start writing songs at 10 yrs. old. How did you discover that it was a good way to express yourself?”

NAYEF “There was a kid in my school that was really popular but he did something bad, which caused him to be put on probation from the popular group. During that time, he became good friends with me. He was writing about it, so I started writing about stuff I was going through. When I moved up to junior high school, I wasn’t picked on as much, but I still got made fun of, for my music. It always kept me motivated to prove them wrong.”

HNM “When did you start incorporating the music into the songs?”

NAYEF “When I was 13, my cousin and I recorded a song with a Moviemaker program. We had the beat playing out of the speaker, we had to figure out the proper distance to blend the music with the voices. It probably wasn’t as good as I thought it was, but I was astonished to hear myself coming through the speakers.  I knew I wanted to do it for the rest of my life. From there, I brought it to school to show my friends and give them all a good laugh. Now, It’s a completely different game – I get messages from people I haven’t heard from in years, telling me they’ve seen and heard what I was doing and they wanna catch up… and I’m like, okay? (laughing) It’s funny, because some of them were specific haters that would write in the comment section of the video, to say it was trash.”

HNM “Where did you record Hold Up?”

NAYEF “I believe it was in my basement. It was originally a club song but after writing it, I put more time into developing more beats and found this groovy soulful beat. I started singing the same lyrics I had written earlier and thought it sounded better, so when my producer came over later that night – I let him hear it. We decided to run with it and that’s how the song came about.”

HNM “You came up with the song idea and recorded it the same day?”

NAYEF “A lot of my songs are like that. This one time, I was going to the studio, really excited to record these 3 songs I’d written. It was an approx. 25 min. drive and on the way there, I wrote a new song that I recorded first and it became my favourite song from the session.”

HNM “In saying that, would you tell other young artists to jump on inspiration when it comes to them?”

NAYEF “Yes, don’t wait… that’s how you run into writer’s block – when you’re forcing it. You have to treat it like a relationship… if it happens naturally, it’s going to grow in a natural way – from a feeling, you’re not forced into it.”

HNM “Is there anything you might do, to get into that zone/headspace, rather than waiting for it?”

NAYEF “Yeah… smoking a little weed, having a drink and playing some beats. I can come up with stuff to write fairly quickly, especially when I have other artists there – it tends to make me come up with a verse pretty quick… but that’s how I rapped before, with bars and things… Those musical songs that I do, are usually when I’m by myself, going through beats and being in the zone. I’ll zone out on a beat until a melody comes into my head… it’s game time after that.”

HNM “Would you then find the melody first and lyrics later?”

NAYEF “If I already have the melody, then I’ll write with that but sometimes I have to figure out a good melody first. Many times, I’ll videotape myself rapping over the beats and singing the hooks and sometimes I’ll send those to my producer to generate some ideas and know what we’re going to do when we go into the studio to record it.”

HNM “Do you play any instruments?”

NAYEF “No… I did want to get into guitar but it didn’t end up happening.”

HNM “If you could live as any animal for a day, what would it be?”

HNM “How has music changed your life?”

NAYEF “I actually think about that a lot. If I didn’t make music, there’s a lot of things I would’ve done differently. If I were a regular guy, people would look differently at me, rather than a guy trying to follow his dreams. I’m glad that people were able to see me not give up on it. If I didn’t make music, I’d probably be an angrier guy because I used music to write about things that I was angry or upset about and maybe those things would’ve come out in a more negative way.”

NAYEF was an incredible guest and is an incredible Canadian talent. His ability to channel music is probably his greatest gift – next to being a father. We wish him and his young family the very best in the future and we look forward to more great music!