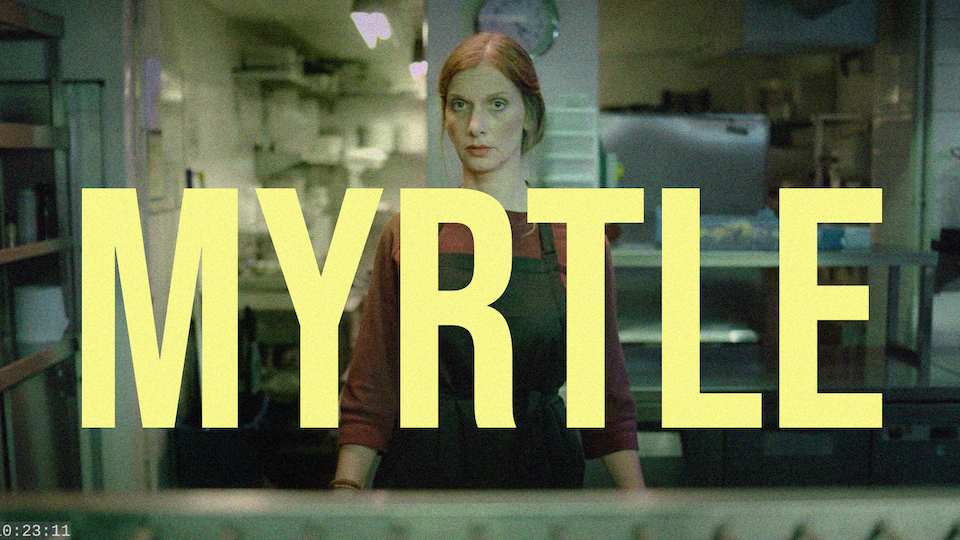 When we hear about a murder, we always want to see justice happen. If you live in the US, that justice can come at the price of your own life. There are 27 US states that have the death penalty for murder but sometimes… they have the wrong man. In every prison, there are testimonies from many prisons, citing their innocence. We’ve gotten so used to hearing it, that it’s become the brunt of many jokes. However, with the advance of medical technology and DNA becoming a valuable tool/game changer in violent crimes, we’re discovering that some of those testimonies have been correct… but sometimes, the evidence has arrived too late.

Myrtle is a gripping story about a mother that finds herself in a considerably conflicting situation that involves her son. She loves him wholeheartedly and is forced to close a large chapter in her life that causes agonizing pain throughout her heart and mind. It’s written by Megan Barker, based on a play written by Megan, after reading a newspaper clipping of a mother that cooks her last meal for her son in an Indiana prison. Patricia McCormack directs and plays the lead role of the mother with marksman precision. Although an actress from Scotland, her southwestern Indiana accent leaves all traces of Scotland behind, as she possesses the body and soul of a tortured mother – with the unbearable task of preparing a last meal for her son on death row.

This film is a slow burn with destruction waiting patiently in the wings. It will resonate with many for multiple reasons. You don’t have to have a child in prison to care about a mothers’ love or an innocent person put to death. The story is matter-of-fact, it’s raw and hard to digest but it is also based on a real event, which hits you like a shovel to the head. Life is not pretty, it’s graphic and sometimes violent. Myrtle will definitely promote conversation after the credits stop scrolling… but that is the mark of a great film and Patricia deserves a huge pat on the back for bringing it!

Patricia is a filmmaker based in London and has trained as an actress in Edinburgh, Scotland to develop her craft as a theatre actress while also appearing in various television dramas, Field Of Blood 2 (BBC1), and River City (BBC Scotland). Her theatre performances include, Pit at The Traverse Theatre, Lost At Sea Finborough Theatre and Succession. In addition, Patricia is also an accomplished voice-over artist, lending her talents to multiple broadcasting commercials.

Megan studied Theatre at Glasgow University, has worked as a playwright since 2007 and has been commissioned by numerous theatre companies throughout the UK. Her works include an adaptation of Ibsen’s , ‘Ghosts’ at the Tron Theatre, Anaphylactic at Soho Theatre and Promise/Adewidd at Sherman Cymru. She founded and was co-artistic director of Feral Theatre and has recently completed her first novel.

Myrtle is produced by mega talent, Shaheen Schleifer and Edmund Curtis was the skilled director of photography. I had the very unique pleasure of speaking to extremely talented Patricia through Zoom about this sobering film from her home in London. Roll the tape! 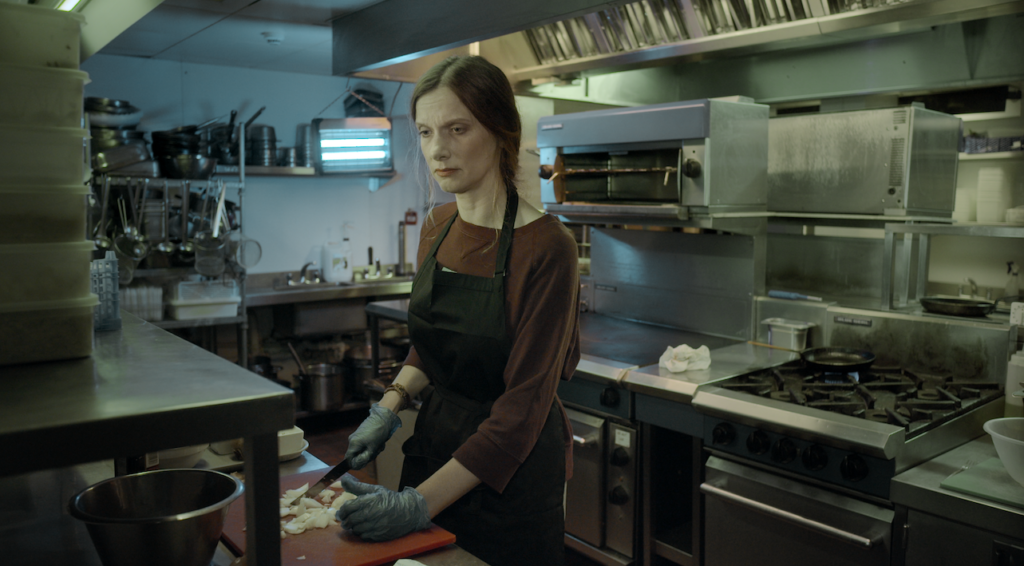 HNMAG “Congratulations Patricia on a captivating film. I had to watch it twice for everything to register. I understand that this was written by Megan Barker.”

PATRICIA “To give you a little background on the story, it’s actually based on a play that I did with Megan and there were 3 actors in the play. The premise has always stuck with me – it’s so powerful, I’ve always wanted to make a short. It’s always been very powerful at the theatre with the structure of the reveal at the end. In the play, everything was revealed through backstory, so we find out everything that wasn’t in the film. We wanted to see if the structure would translate into a film short and it seems to be working, so that’s great to hear.”

HNMAG “You did a phenomenal portrayal, I loved your performance. Where did you find that kitchen?”

PATRICIA “Funny enough and thanks to Covid, we found the kitchen in a restaurant, in the ‘City of London’ building. They were closed part of the week, due to Covid and all the bars and restaurants in the area had no walk-ins. It was August of 2020 and we were in between lock-downs but the restaurant was still closed part of the week. We really wouldn’t have been able to film at the location without the Coronavirus.”

HNMAG “Do you know the origins of the play, if it evolved from a true story?”

PATRICIA “It’s not based on a true story; it is fictional but the idea was based on a real event. Megan had read an article about a mother in Indiana that was granted the right to prepare her son’s last meal. I think the circumstances of the situation pose such a conflict for the need and opportunity, to show one last act of love for your son… with the end result being so horrific.”

HNMAG “With a film that creates pause to question the validity of capital punishment, had you received any backlash for those in favour of the death penalty?”

PATRICIA “Not yet (laughing)… but, we were quite conscious of not making a statement, one way or the other. We wanted to have integrity for a person in that situation. Although subtle, the script alludes to her son’s childhood and how circumstances might lead a person down a destructive path. I think it’s also worth noting that the mother hadn’t indicated whether her son had committed the crime, or was guilty of the crime. The story is shining a light on a situation, if only for a moment.”

HNMAG “As a director working with the writer, did you have to tame it down – in comparison to the stage play?”

PATRICIA “It’s so different in comparison to the stage play, because we had a full text, an entire story. Within the short, we had a nuance that we could delude to, even if the audience didn’t know what it was. I believe it gives texture to the piece – we know who the murderer is, although Megan didn’t want to reveal who it was. We’re setting subtle innuendos, through memory but without stating who the murderer is or what was seen. With its present state/story, we’ve been inspired to expand the story to a feature film, to tell the dramatic story in its entirety. In answer to your question, we’d decided to only use the cooking scene from the play, with the chatter threaded throughout but without revealing the full-blown story. When we were making it, we struggled with the decision – do we tell them the bombs under the table or do you wait till the end?”

HNMAG “Did you have an opportunity to rehearse?”

PATRICIA “Not within the space we didn’t. Because it was a low budget piece, we had to work with what we had. I would’ve loved to elaborate on her meltdown, creating shambles of her cooking, with comedic effect. Unfortunately, we didn’t have the time, nor the resources – but it was part of the joy of working within your limitations, which can bring out other possibilities. I worked on my rehearsal in my own time and within the workspace, we had to workshop it to see what would work within the kitchen for a crew of 15.”

HNMAG “This is your first time in the directors chair. What steered you towards directing?”

PATRICIA “Interest really… I wanted to see if I could do it. I’ve not been to film school, so with every step of the way, I went into the BFI (British Film Institute) Library on the South Banks and read every book on ‘how to make a film’ and what the terminology was for all the camera angles. The challenge of taking something in your head and learning step by step – how to translate that into film. Coming from a theatre background, taking a play and molding it into another form… is very exciting. I’ve taken the next step in discovering how to make a film, which is entirely exciting because you’re jumping into the dark.”

HNMAG “You sport an incredibly impressive American accent in this film. Great job.”

PATRICIA “It was certainly a process. I also wanted to be specific to the area. Fictionally, we placed her in southwest Indiana, near the border territory. I really pinpointed the area, in order to get the dialect as close as possible. It’s part of the fun as an actor to be able to explore another world, in every sense.”

HNMAG “Moving forward in your career as a director, would you like to tell more American stories or do you have a preference in location?”

PATRICIA “What I’m really interested in, is a strong narrative. I’d love to make my next short film in Glasgow actually, which is where I’m from in Scotland. It’s a very cinematic city and often used for American movies.  They’ll redress it to look like Philadelphia or New York. The new Indiana Jones was filming there recently. In terms of shooting locations, I wouldn’t want to limit my options. My long-term goal is to develop Myrtle into a feature film, which would be set in southwest Indiana.”

HNMAG “How has the film been doing at the festivals?”

PATRICIA “We’re doing very well in North America, to be doing well anywhere is amazing but I think the subject matter lends itself well to North American audiences. We’re in over 40 festivals and were recently at the Cinefest in Sudbury, Ontario. We also made it to the semi-finalist of the Flickers With Violence festival, which is an Oscar qualifier. It’s a good feeling for your first short film and it’s been picking up traction, which is amazing – I’m absolutely delighted.”

HNMAG “Are you looking forward to more directing?”

PATRICIA “Absolutely, my interest has peaked. I have a few ideas and I’m ready to go again. I’m aiming to shoot my next short in January and directing is absolutely what I want to pursue.”

HNMAG “Will you be pursuing female driven stories or does it matter, as long as it’s a great story?”

PATRICIA “As a female, I’m drawn to stories that are close to me, which are female led pieces but I also don’t want to box myself in or exclude a good story regardless of who it came from.”

HNMAG “Has this film won any awards yet?”

PATRICIA “This film has already earned Awards for Best Narrative Short and Best Live Action Short in Detroit and in the monthly festivals, which are much quicker. We’re hopeful for more awards from the festival run.” 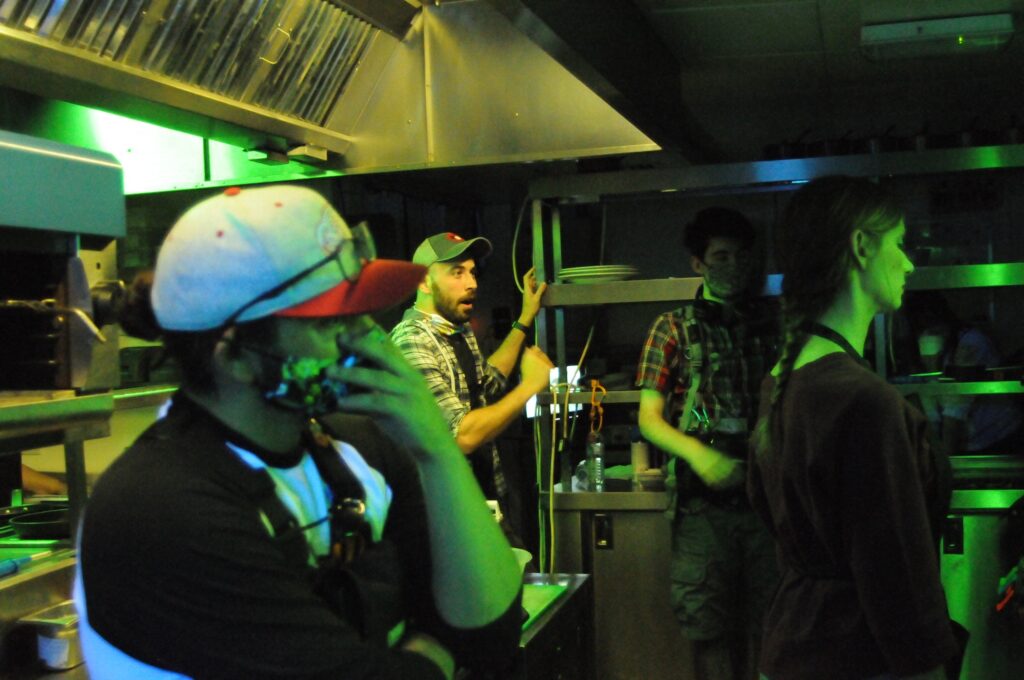 Patricia McCormack was an amazing guest and her film Myrtle is bound to spark conversation and debate. This film has star quality in every breath, every scene and in every emotion. Patricia has hit the ground running in soccer cleats and Myrtle is the battering ram, so open the theatre doors!