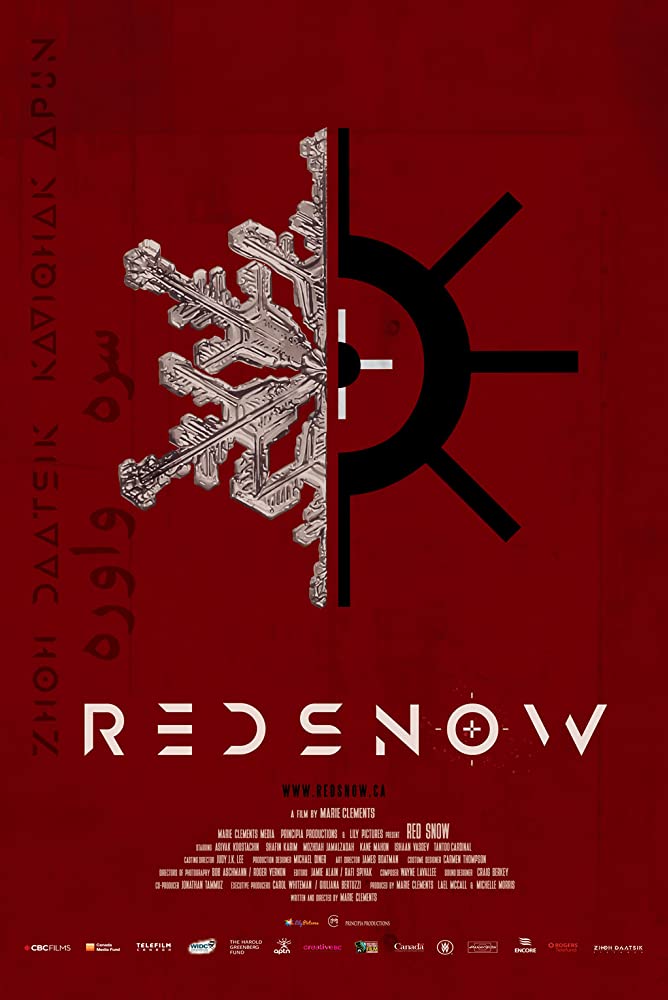 When you think of British Columbia, you think of its magnificent forest’s, its spectacular sunsets, its oceans and its thriving film industry. There is also fishing, there is the diverse cultures, the amazing restaurants but we truly are known for being Hollywood North and we do have some very skilled filmmakers here. It’s only a matter of time before we take over, but then again… we are Canadian and will always be courteous about the takeover.

One very skilled and talented writer, director and producer paving her own yellow brick road to success is Red Snow filmmaker and award winning/multi nominated Marie Clements. As an Indigenous filmmaker she has her pulse on humanitarian issues, world issues and Indigenous issues. She creates films that captivate, educate, entertain and she wants you to be moved by the story and the characters. She locks herself up in a darkly lit room for months at a time with no windows, no distractions and only when her vision is fully realized on paper does she call the locksmith. I might be slightly exaggerating but her stories reflect focus with heart and soul.

Red Snow is her latest production that she wrote, directed and produced. It premieres on Friday, March 13 at the Cineplex International Village in Vancouver. If you want to see a legend in the making, then go see Red Snow if tickets are still available.

I had the very privileged opportunity to speak with Marie Clements about her much talked about film and the journey that led her there.

“What made you prepared to manage a film of this magnitude?”

“I think Red Snow and The Road Forward were very vigorous and challenging films. I’ve had to rise to that challenge and lean into telling the story in the right way. It was definitely challenging schedule wise but also thematically and artistically. I kind of liked that.”

“With the success of Red Snow, how good does that feel?”

“I’m very grateful that people are responding to it so well. I really hope that they feel something and that it resonates with them. It’s very humbling when you’re recognized for that and I’m very happy for everyone involved.”

“Why did you choose to make the documentary, The Road Forward a musical?”

“The Road Forward was inspired by the newspaper, The Native Voice which was founded back in the mid ‘30’s by Indigenous activists that wanted to chronicle what was happening at the time. There were news stringers from all over the world that got into this newspaper and we started seeing news stories from the America’s of what was happening socially, environmentally as well as human rights stories. You really had a sense of the world that you didn’t have before. The newspaper was giving voice to the issues of the day. I was looking at the impact of the newspaper and was also looking at Indigenous singers that were giving voice to what was happening in our day. To me it made sense to combine the two while also approaching the history with an open heart; music is a great vehicle for that in opening our hearts before our minds.”

“Do you have a background in music?”

“When I was younger I played piano for 8 eight years but have left it behind. I think writing borrows some of those disciplines and rhythms.”

“Do you have a preference between writing and directing?”

“At this time I’m loving both. If you’re a writer you can write anywhere and anytime but if you’re a director you can’t. What I love about writing is the freedom and also that it’s a faithful occupation in the sense that, the more time and dedication you put toward it, it will give back to you in spades. I love that about writing but I also wish I could direct everyday. As a writer you spend so many hours, days, month’s and years, envisioning it and finally giving birth to it. To actually see it being played out is really extraordinary.”

“You have written, directed, acted in and produced many of your projects. Do you prefer to be immersed on all levels?”

“There’s something really gratifying about having an original vision, creating a story and then executing that story. I love the entire process of starting in a room with no window and very little light.”

“Your first film Jesus Indian was about an Indigenous woman that had been incarcerated and later finds resurrection through lyrics. What inspired that journey as your first film?”

“I began looking at Indigenous women in jails and their sacrifices. There are a large number of Indigenous women incarcerated in Canada and a higher percentage than other women. It’s told through song much like a music video. It was a great little piece and more of an experimental film.” “When you’re not shooting films are you working between projects?”

“Yes, I’m usually working on 2 or 3 projects at a time but focusing on getting one to a certain place before turning to the other projects.  In general it’s how the business works; you create your first draft and then raise money for your other drafts and production. There are all these little gaps along the way.”

“How comfortable are you with producing?”

“I started off as an actor and then became a writer. As I moved more and more into writing/directing it made sense to be able to produce your own work. What I love about producing is, you’re able to fight for the process that you believe in, as well as being able to barter for things (laughter). I think with a lot of Indigenous work/culturally diverse work you’re really trying to find ways of working that make sense for the story and in order to do that you have to take responsibility for producing and finding partners that you can produce with. You’re always learning in producing and as a writer/director. To produce great work you really have to find great partners that know other parts of it; it’s multi-faceted.”

“Is that challenging to find that missing piece of the puzzle?”

“I think we’re always looking to find people that complete something. I don’t think one person is great at everything but you’re trying to compliment each other’s skills and build a team that can become one. Someone that knows what the story is and is able to fight for the story and able to execute it.”

“When you wrote and directed Pilgrims, it seemed that you were turning another direction from what you had done previous. What made you want to explore the story of a drowning German tourist whilst recounting the moments of his day, his identity, love, death and transformation?”

“(Laughter) That’s a good question. I think because I live on a small island and a lot of tourists come to it. Sometimes people from Europe and other countries that come to Canada have a preconceived image of what the Indigenous is. The idea sort of came about from talking to someone that’s asking for directions and they’ll suddenly ask ‘do you know where the Indians live?’ They don’t realize you’re Indigenous and that we all live pretty similar to everyone else. It’s about looking at this character that was fascinated by Indians and came to Canada to bond with them. He runs into three native guys that don’t want to bond with him and goes through this ordeal. It was a lot of fun and had a great cast and crew.”

“When you’re travelling to all the film festivals, what does that process feel like?”

“Tomorrow will be the 8th festival in approximately 5 months for Red Snow. There’s a lot of energy at film festivals and you’re also around filmmakers from all over the world where you’re able to talk about film, see films, eat film and dream film; you’re totally consumed but it’s also inspiring.” “I love being on Galiano Island. They have great beaches and I do a lot of baking and enjoy being with nature.”

“I’m a motorcycle girl. I love the highway. I had a Honda 600 a long time ago. I also like boating.”

“What was the biggest reward in creating the film, Red Snow?”

“I think it was bringing all the creative’s, the actors and I felt like we built our own family to tell the story. It was a pretty rigorous shoot and was either really cold or really hot. We had to shoot in 20 days, so it was challenging and being able to work and collaborate with people I admire and that were dedicated to the story was great.”

“It took quite awhile. We cast in several different locations, such as Yellowknife, Edmonton, Calgary, Vancouver, Toronto, LA and New York. With a diverse cast you sometimes have to go outside your city to find the best combination.”