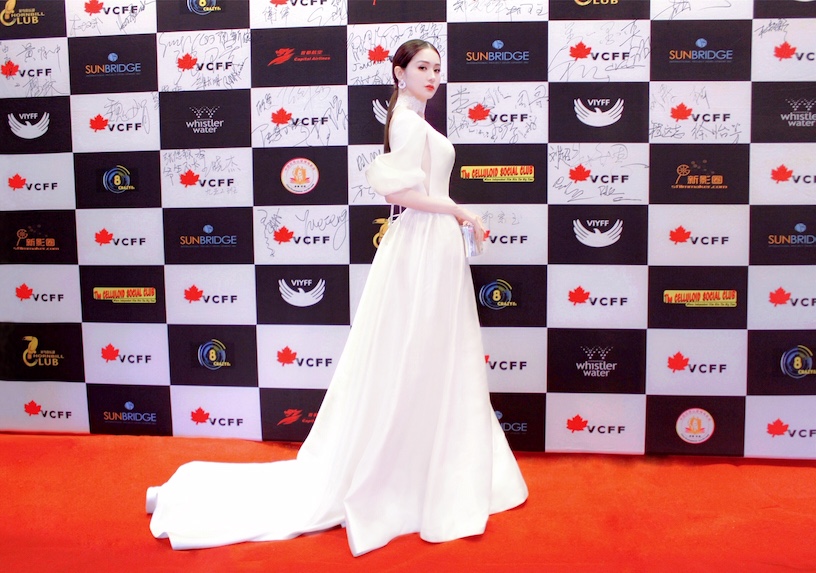 The Vancouver Chinese Film Festival is coming to town from August 11 – 16, 2019. It is the 7th year Vancouver is hosting it and some of the talent has arrived in Vancouver ahead of time. I was ecstatic to find out that actress Leni Lan (Crazybarby) was staying at the Trump hotel and was willing to talk to us about her contributions to film. Crazybarby is a bit of a newcomer to the industry but is blazing a trail as she pursues her dreams.

Being an actor in a foreign country is not easy. You’re away from home, the food is different, the music is different, you miss your family and your network TV… but this is also what you signed up for. Adventure and travel is a big part of the draw for actors. Sometimes it’s escaping that small town where everyone knows your name even when you grow old. You start a garden and soon everybody knows you have the tastiest tomatoes in town and wants to know your secret. If this is your legacy then it only matters to you how people will perceive your footprint. For some of us, we want a bigger footprint and the notoriety that accompanies it.

When you discover your passions and dreams your instincts take over and your compass will always show you the way. Your drive, your ambition, your tenacity will be tested and you will question your sanity and your good judgment. The risks you have taken sometimes take months and even years to yield a good result. This is acting and just like any big dream, it takes faith in yourself and faith in others that you will succeed. This is the case of Crazybarby, an Asian actress that has only started in show business a few years ago but is having some early success. She’s travelled from Hong Kong to Vancouver for the VCFF and was extremely generous with her time in allowing us to visit her at the Trump hotel and ask her about her colourful career.

“Why did you want to become an actress?”

“I found it interesting, you get to meet all kinds of people and travel around the world.”

“What type of music do you sing?”

“I only have 3 original songs and focus my time on acting.”

“What types of characters/roles do you like to play?”

“Do you prefer to be in comedy or drama?”

“I was taught comedy in Art school but prefer to be in a drama series.”

“If you could make a film and act in it, what would it be about and what role would your character play?”

“It would be a love story shot at different locations around the world. I’m not sure type of character I would play. I would be more concerned about the romance story.”

“Would you ever want to play a super hero or super villain?”

“What film are you most proud of?”

“I was in a film, Butterfly Kiss that was made in Russia. I had to speak Russian in the movie. It was very interesting because I couldn’t speak Chinese.” “You starred in the film Everlasting Regret directed by Stanley Kwan. It sounds like a depressing story about a woman who never finds true love. Was that a difficult role to play and how did you prepare for it?”

“I wasn’t the leading actor in that film but the director is very well known in Hong Kong and is a very nice man. We’re now good friends. I hope to work with him again in the future.”

“Does your family support your acting career?”

“They support me emotionally but not financially. They are happy for me.”

“Do you get recognized on the streets of Hong Kong?”

“I was actually recognized while I was here in Vancouver by a young boy. He is a Chinese International student and wanted to take a picture with me, so I did. In Hong Kong I don’t go out very often because the media is very aggressive and always wants scandal.”

“You have worked with Jackie Chan. Did he give you any good advice?”

“He told me to always be nice to people and to never waste food… otherwise he will eat the leftovers (laughter).”

“What would you rather do; parachuting out of a plane or walking through a haunted castle?”

“I was in a horror movie already so I think a haunted castle would be my preference.”

“You were in the film, Butterfly Kiss. What was that story about and how did you get involved?”

“For this film, they were looking for an actress that looked mixed. They had been to Shanghai and Beijing China but were still looking for the right girl. My agent told me about it and I auditioned. It was my first movie and was about a young Russian man falling in love with a Chinese girl that had no name and no passport. It was shot in Saint Petersburg, Russia. I couldn’t understand the Russian language and what I was saying so I memorized the words. I was the only Chinese person in the film and I practiced my pronunciations for a week before we started shooting. I’m a pretty quick learner. It took 6 mths to shoot it.”

“What is the best thing about being a working actor?”

“I enjoy the idea of following my dreams and my passions. Saving money and problem solving is important also.”

It was a thrill talking to Leni Lan – Crazybarby from Hong Kong. Despite our language barrier, we both connected when it came to our mutual passions on film/movies. She was classy, she was professional and she was extremely friendly. I hope we will meet again someday.