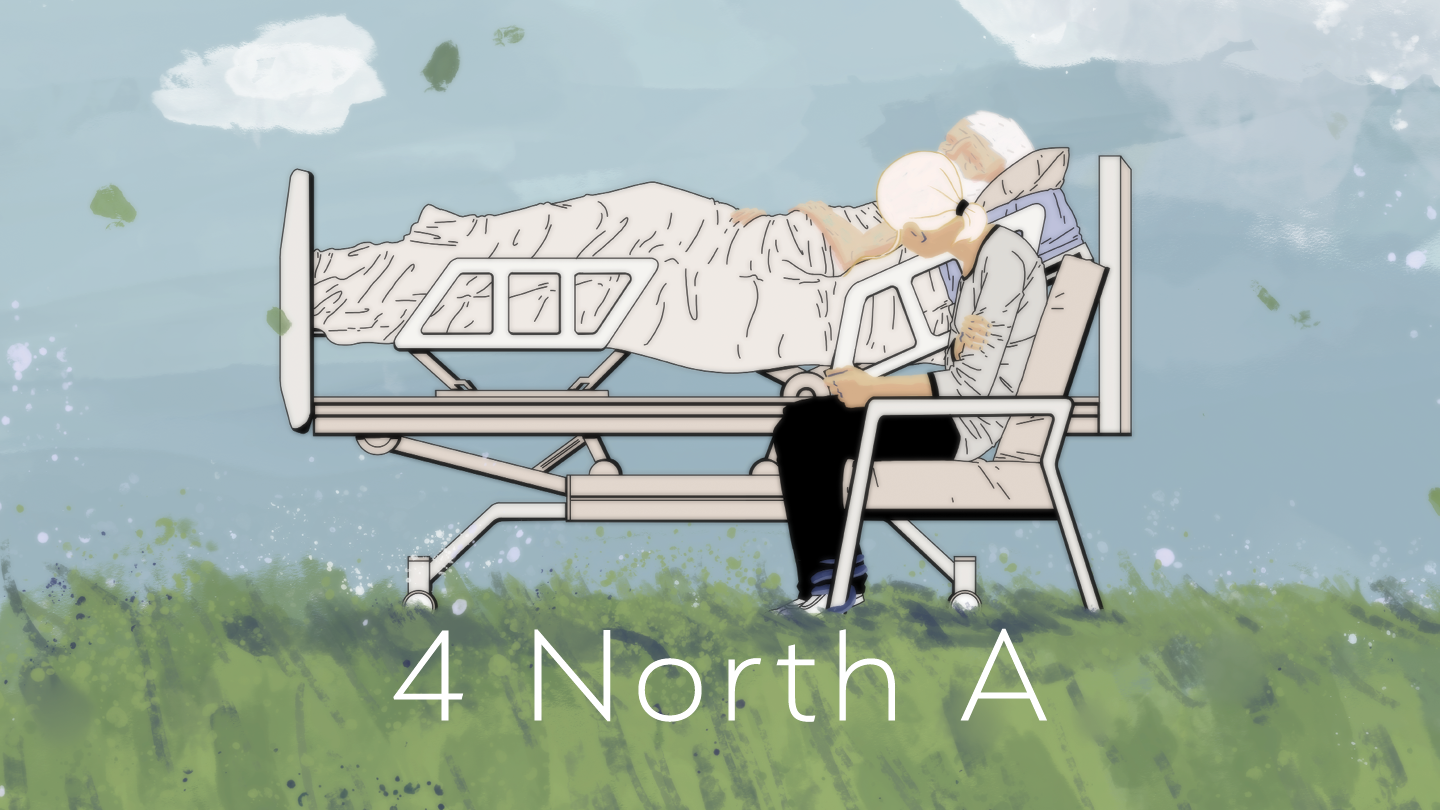 Life is tough, let’s face it. People are getting sick and many are in the hospital. If you’ve lived past your twenties, then you’ve likely visited someone in the hospital… and maybe they didn’t get better and maybe they didn’t leave. The circle of life never stops and its victims impact the living, long after they’re gone. Depending on the footprint they left behind, the memories will forever be kept in that private library – opening only to you, when you need them the most. When you visit someone in the hospital, that’s dying – the emotion is raw, it’s the hardest pill to swallow and it is… so lonely. That’s a very sad visual and many of you have been in that chair by the bedside, trying to comfort your loved one in their last moments. Now imagine that there is nobody in that chair, by that bedside – because that is the current reality of the dying in today’s hospitals. They are dying alone with only the nurses to hear their last whispers of knowledge, of hope, of love and acceptance.

Life is tough, but it’s also beautiful, which is why it’s so hard to let go. The life will leave but the memories never do. Someone that knows this very well and is able to convey it through animation, is Jordan Canning. She teamed up with extraordinarily talented animator, Howie Shia to create the film and dip her toes into the world of animation for the first time… and I think she is enjoying the landscape.

Jordan is a graduate of the Directors Lab and has made more than a dozen short films, including Countdown, Not Over Easy and Seconds that have screened at numerous festivals, including the Tribeca Film Festival, Toronto International Film Festival and Interfilm Berlin.  She directed two feature films—We Were Wolves (TIFF 2014) and Suck it Up (Best Feature Film at the 2017 B3 Biennale in Frankfurt) and co-directed the omnibus film, Ordinary Days (Best Director at the 2018 Canadian Film Fest). In addition, Jordan has also directed many episodes of television, including This Hour Has 22 Minutes, Baroness Von Sketch Show and the Emmy-nominated Schitt’s Creek. In 2019, she and her co-director took home the Canadian Screen Award for Best Direction, Variety or Sketch Comedy for their work on season three of Baroness Von Sketch Show.

Well established with the vision of 10 eagles, Jordan is breaking from her comfort zone and embracing the world of animation with 4 NORTH A. I asked her ‘why now’ amongst many other questions. Although this story is so relevant today… The story was created 5 years ago, from her mother’s memories of the summers on Amherst Island as a child. I’ve watched this film and it breaks down barriers, when it comes to evoking real emotion from animated characters.

It is premiering at the 2020 Whistler Film Festival and Screening as part of Shortwork 3, starting Monday, December 14 until December 31 and is available for streaming across Canada.

Told with a quiet, expressive soundtrack and beautiful, subdued design that shifts between the pale hospital palette and the impressionistic landscapes of the woman’s memories, 4 North A is both a tender celebration of the fleeting joys of life and a bittersweet reminder that we don’t always get the closure we seek.

I spoke to Jordan about this impactful animation and whether or not she would stick around for a second animation.

HNM “This was a very poignant story, that has so much relevance especially during these pandemic times. When did you write it?”

JORDAN “I wrote the script about 5 ½ years ago and then went about the process of finding the right animator to team up with. The National Film Board was very helpful with that – they have a huge list of resources of great artists they’ve worked with and eventually someone had sent me Howie Shia’s work. I loved his animating style and the emotion in his storytelling – it has an almost ‘graphic novel’ style. It wasn’t what I had initially imagined, but there was something that stuck. He really liked the script, so we began this really long process of development. He was in Toronto and I was in Newfoundland at the time. We’d send images back and forth, we’d start developing the character designs and the environments. We discussed how we wanted to delineate the present – day hospital world with the memory sequences in a stylistic way, with sound and colour. We took a long time to make it, but ultimately the extended time really helped the story. We could see it with fresh eyes and pull some stuff out or find a better way to do something. We took about 3 years to get it down to this animatic and 9 – minute version, which is quite close to what the film turned out to be.” 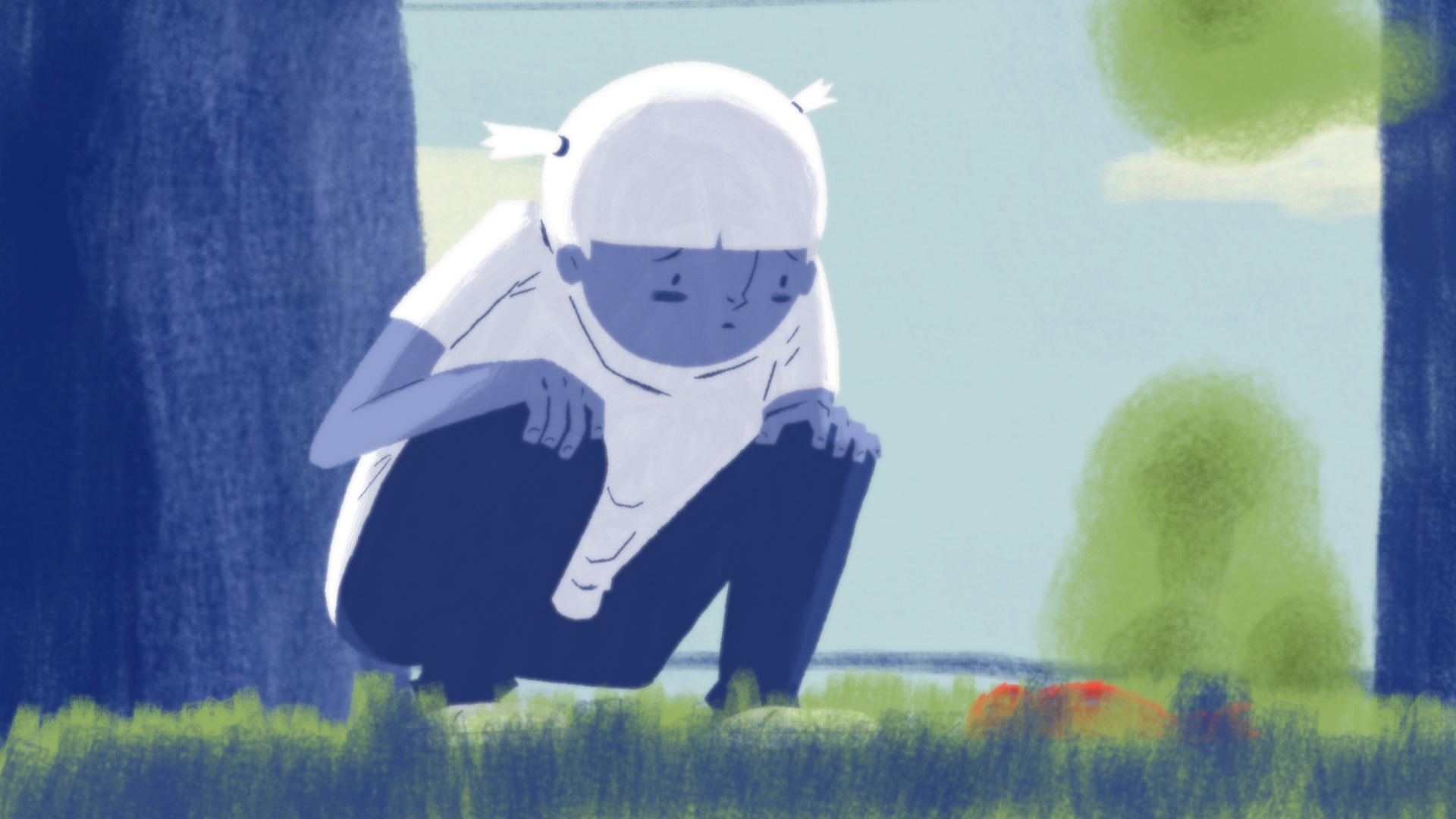 JORDAN continues, “We had a team of animators working remotely in different areas – one would be working on the backgrounds, another was working on the memory sequences and one was doing the colouring, so it was a real interesting experience for me to go through that with Howie. I really enjoyed the shot by shot process and going back and forth making adjustments. It was very fun.”

HNM “I really loved that overhead animation shot, looking down on the individual hospital beds. I’ve never seen that in an animation.”

JORDAN “It’s one of my favourites too. Howie and I have both had a lot of experience waiting around in hospitals. I think it’s why the story resonated for the both of us – it’s that shared experience. We were able to find ways to bring it to the surface. That overhead shot was created to make her feel small in this big sprawling world around her. It was really important to us to evoke the experience of waiting in a hospital and the bizarre ranges of emotion that come with it. Those little details were really important. One of my favourite weird little moments was when she took the battery out of the clock. It was always in the script – but then Howie added ‘laying down battery’ and then it rolled… and ‘tink’, against the glass. I adore that shot along with that strange little detail; animation is cool.”

HNM “This animation is a very realistic portrayal of a loved one’s last days at a hospital. What were some of the reasons you decided to tell the story in an animation form, rather than film form?”

JORDAN “I wanted to connect this moment with this adult woman facing the death of her father and connect them to the memories he tried to impart on her, ways of accepting death as part of life. Whenever I pictured it and how I would shoot it with real actors and real faces, there never seemed to be an elegant way to move in and out of these memory sequences without it feeling too ‘heavy handed’. The flexibility and endless opportunity that animation provides – it just made more sense.”

HNM “What were the daughter’s memories inspired from?”

JORDAN “They were based on stories my mom had told me. The snake story is a slight adaptation of a true story that really stuck with me. She told me the story of her dad shooting Starlings off the clothesline. I was trying to find a way to introduce death into a child’s life – in a natural way. Those were always the foundation of the original idea. It was connected to the hospital storyline, much later.”

HNM “What has some of the audience reaction been to this film?”

JORDAN “It’s funny because we’ve been working on this film for 5 years and now that it finally comes out… It’s 2020, which is (laughing) such a strange year. On one hand, it’s gotten into some great film festivals, but we don’t get to go to them to actually gauge the audience reaction – but on the other hand, the themes and subject matter has taken on this whole other meaning that we hadn’t considered when making it. It’s coming out at a time, when we feel so isolated from one another and we’re starving for that human connection.  To make a film about finding a spark of human connection, even with a stranger – when you’re going through one of the most difficult times of your life… has really taken on more resonance with me. Being bedside of a loved one who’s dying is painful and gut-wrenching but is such a privilege to be there because so many people are not able to be with family at the hospital. It’s been interesting because Howie and I hadn’t thought about that when we were making it. We’ve gotten some great reactions to the film, even over the Zoom film festivals.” 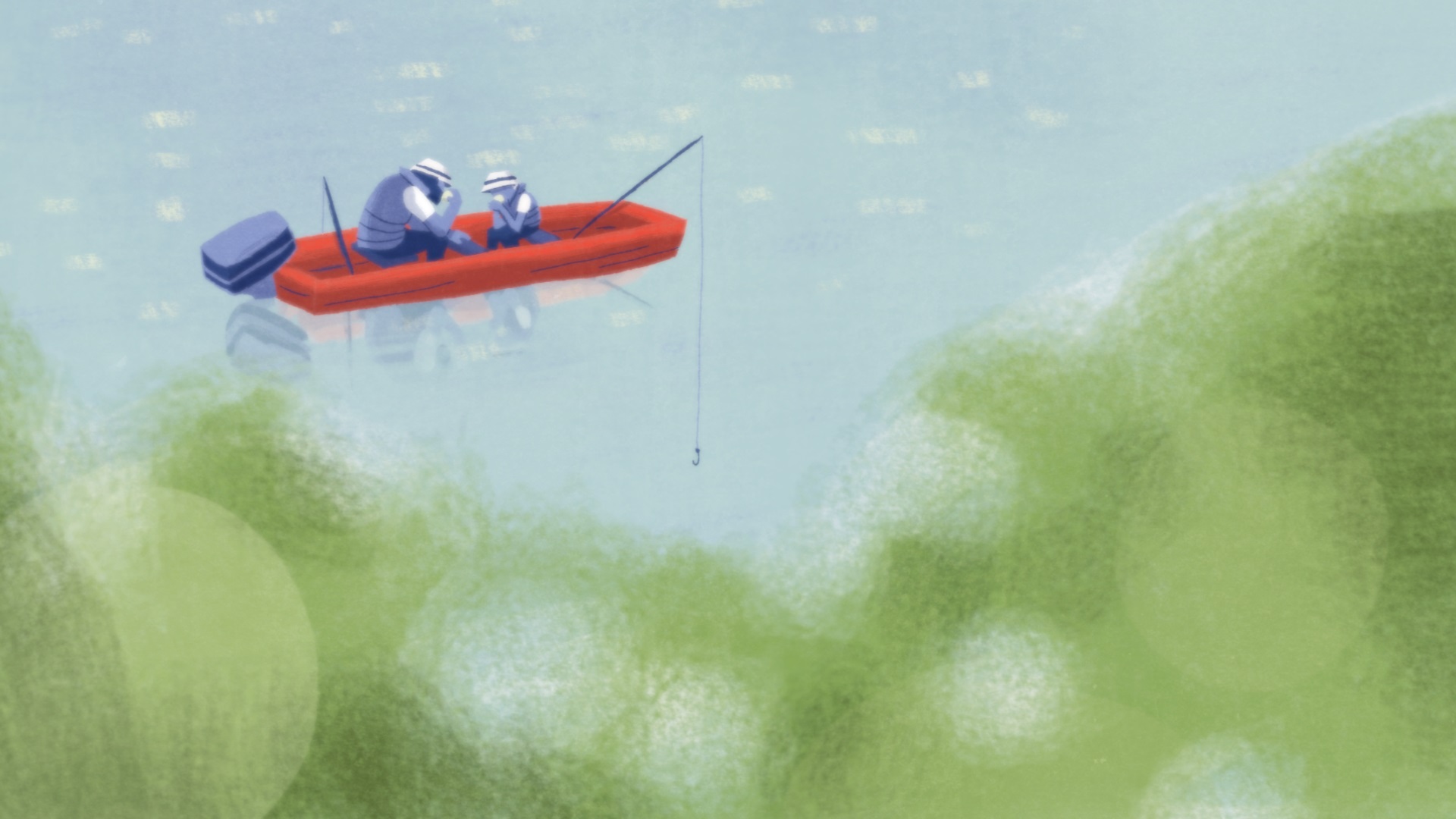 JORDAN “It really depends, this short came out very quickly because I’d been thinking about it so long. I had the images in my head from memories and spending time at the hospital, I think I wrote the script in a day. It was 9 pages and it flew out of me very organically. It really varies though, I have a bunch of features that I’m continuously working on. I would say that… My personal writing process is doing it in big spurts and then taking a break from it for a while. I like to get up early, work on it every day, and once it’s done – let it stew.”

HNM “I’ve heard that many writers, before starting a feature – will write an outline. Do you also use that method?”

JORDAN “Yes I do, generally. The first few scripts I wrote I didn’t but I promptly learnt my lesson. I think the more prep work, back story work, character work you can do before starting a script will only help. Once you’ve written a script, you get attached to the scenes, the dialogue and it’s much harder to dismantle or throw them out, after the fact. I absolutely work with an outline and move things around – it makes the writing so much easier when you have a roadmap laid out.”

HNM “There’s been more effort and attention on making more diverse films with more female driven projects. Have you noticed any change?”

JORDAN “Yes, I have definitely seen a shift in the last 5-6 years and there has been a more concerted effort to achieve gender parity and hire more women. I did my first episode of TV in 2016 and even back then it was pretty rare for a young woman to be getting her first opportunity, which required a lot of stars aligning and a male director dropping out for me to even get that opportunity. I had already made 2 feature films and felt like I had to build a case to prove that I was ready to direct an episode of TV. I have noticed in the last few years that the door has been cracked open a little bit more and there have been women directing television that haven’t made their first feature, so it’s nice to see that there are producers on networks who are actively making that first step easier to achieve. With that being said, there’s still a long-ways to go, especially with crew – it’s still very male dominated.”

HNM “What would you like your audience to walk away with?”

JORDAN “It’s a sad film… but that potential to find human connection anywhere, can resonate with people and maybe make them feel less alone – and you can feel that comfort, in a fleeting moment with a stranger.”

HNM “Where can we expect to see this film after the Whistler Film Festival?”

JORDAN “It’s playing at other film festivals but I think eventually, it will end up on the NFB’s online library, but I’m not entirely sure when that will happen.” 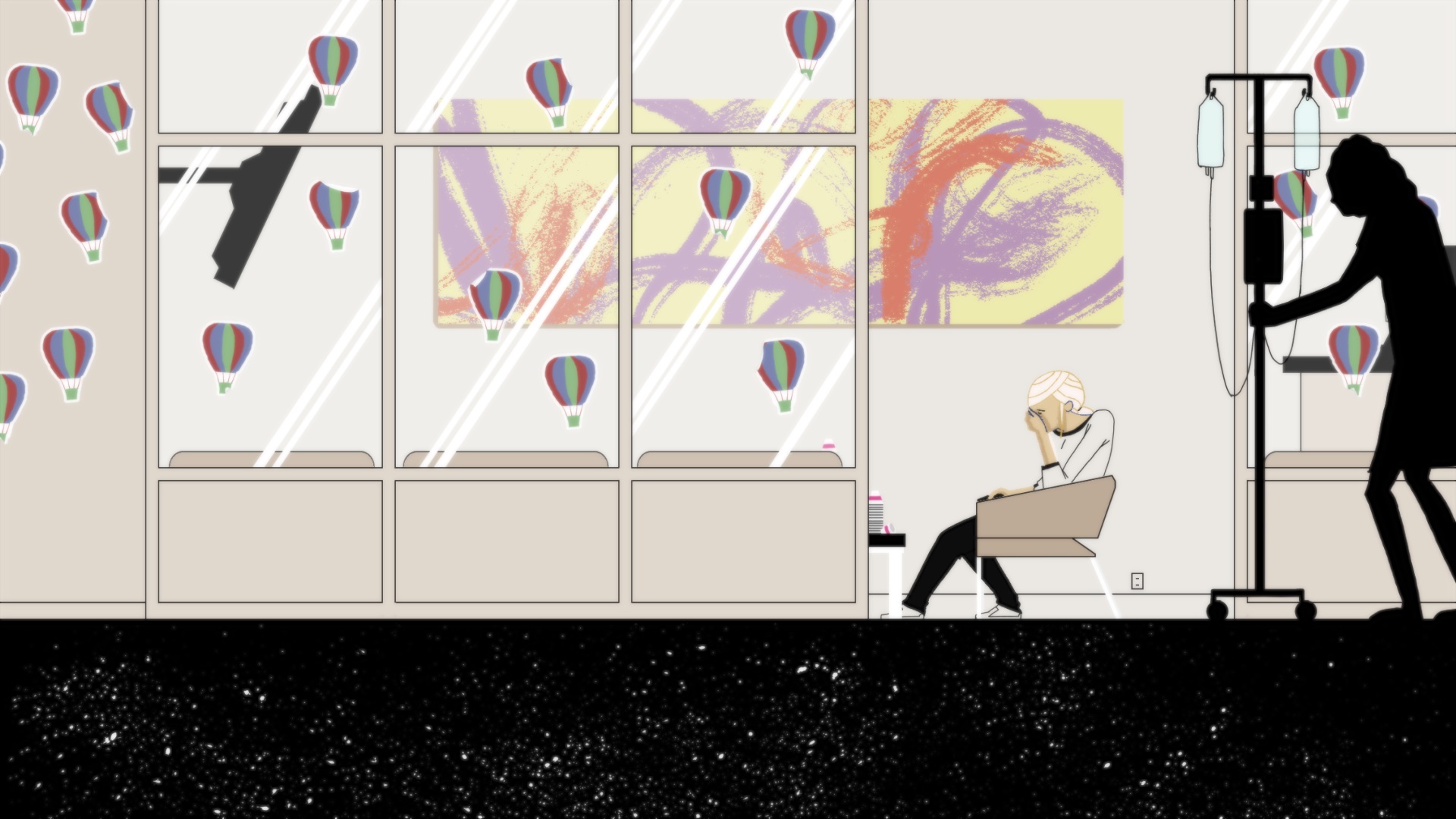