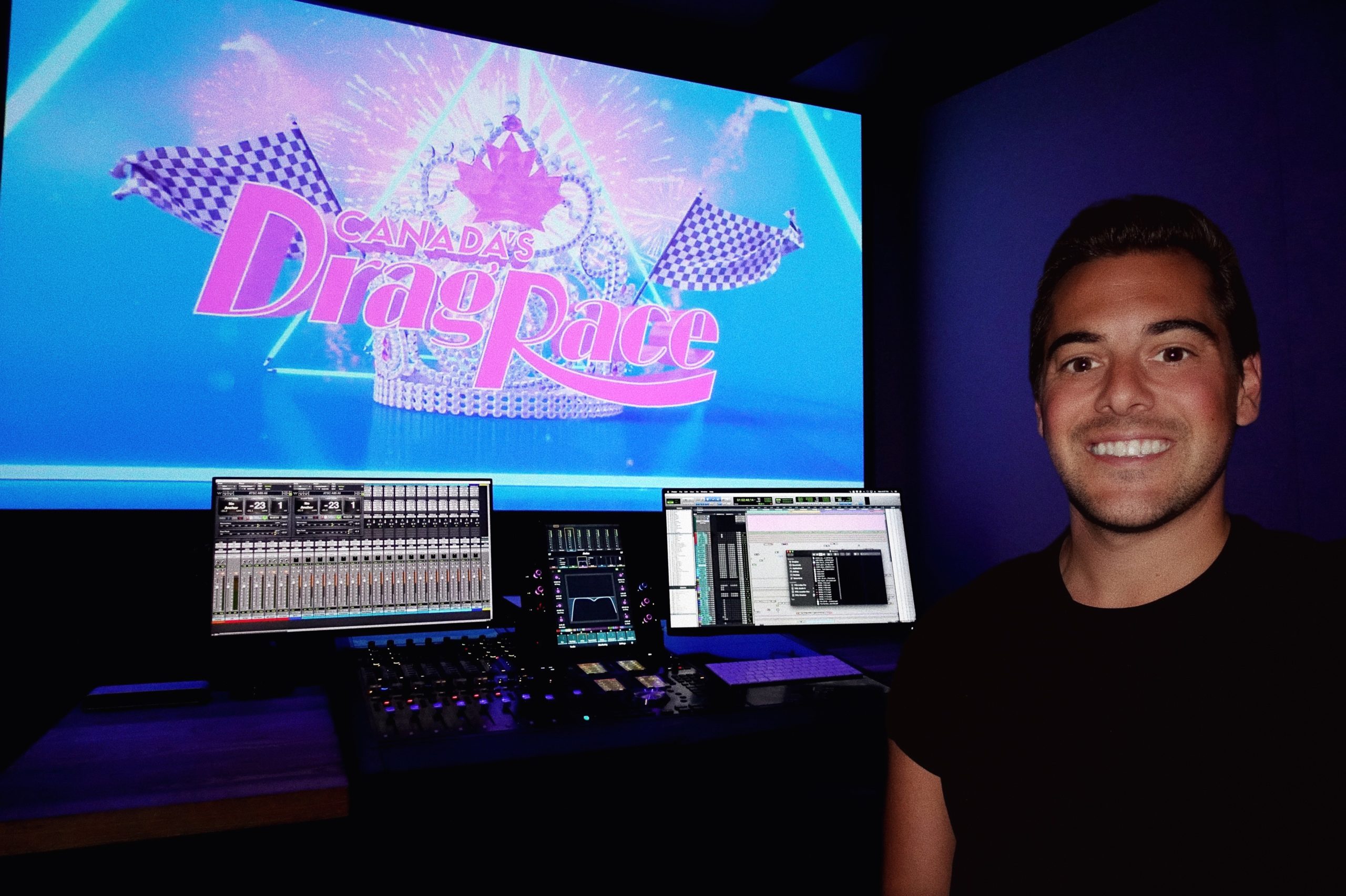 The pursuit of happiness motivates many of us to keep moving forward while learning along the way, what exactly makes us happy. It can change from the beginning of your pursuit to where you eventually arrive. Life will throw distractions and road- blocks, it will test your focus and determination – only YOU can get yourself to the finish line, and it will still be your personal best… because you made it.

John Diemer graduated from Audio College in 2011 and jumped into the ring to take on all challengers… well Top Chef Canada to be exact. It was his first gig but he had worked up an appetite for more. As John’s pursuit for happiness took shape, he’s built his resume to reflect a good number of outstanding award-winning productions, such as The Amazing Race, Canada’s Drag Race, Survivor and Restaurants on the Edge. In addition to John’s TV success, he’s also produced award winning documentaries, such as – Who Let the Dogs Out, Pistol Shrimps and A Brony Tale. He founded his company The Farmhouse Creative Labs and is still pursuing more. We talked about his journey as well as some 50 countries he’s been to.

Prior to our interview, John informed me that he and some producers of Canada’s Drag Race had a small get together the night before with social distancing – to watch an episode of the show. He said it fell short of the previous year’s wrap and celebrations – there were no live contestants or live audience to root and cheer. He admits it’s been disappointing that they can’t properly celebrate the hard work and the performances. If you can imagine a party with no noise, I think you’d be in the ballpark. Given the circumstances, John seemed to be content with the gathering and although hijacked by Covid – they celebrated the best way they could… together.

“Were you involved with the filming of Canada’s Drag Race when Covid-19 hit?”

“We shot the show in November, so we were totally fine. We started editing in March and we just delivered the last episode last week. I handled all the location sound and my company handled all the post-production on it. The editors all worked from home and the team is pretty small, there was just the three of us.”

“How involved in the production of Canada’s Drag Race is your company?

“We’re doing all the sound production – we had a team of five people and it’s more of a live-show than a TV show. We’ve got a full Flypack (video broadcasting system) control room. The director of Canada’s Drag Race also works on the Juno’s, Canada Screen Awards, so she’s definitely from the live world and that’s the way the show needs to run.”

“When did you incorporate your company The Farmhouse Creative Labs?”

“I graduated from Audio College in Ontario in 2011 and started freelancing before formally incorporating my company in 2014. I’m still relatively new to the industry to have the opportunity to work on a show like Canada’s Drag Race.”

“Did you have to step up safety measures working on post production?”

“No – one of my editors worked remotely and my Sound FX editor worked with me. We have a fairly large workspace in our studio with 3000 ft. and we’re isolated in separate soundproof rooms and would go entire days without seeing each other. Normally for a mix playback you’d have 5 people there – the post-production supervisor, show-runner, director and at that time we were only able to have 1 person at playback at a time.”

“I heard a story about some very special wood that you had used to build your studio (The Farmhouse Creative Labs) with. Your parents were selling their farmhouse in Woodslee, Ontario and you salvaged the lumber from their old barn?”

“I was actually with some Vancouver people when I thought of the name and we had discussed incorporating. I was carrying some guilt about not taking over the family business – my grandfather was a farmer, my dad was a farmer and we had a huge dairy farm outside of Windsor that housed thousands of cows. None of my siblings wanted to take it over and I was the youngest… and the last hope. When I named the company Farmhouse, it was my alleviation of guilt and also a tribute. My dad sold the business and the barns were being torn down – barn board is so expensive in Toronto. It was important for me from a nostalgic stand-point though… I’ve even put some old photos of my grandfather on the dairy farm into some nice frames; there’s a lot of nods to him.”

“That’s a new Netflix original and it was a special one because it was just before Covid hit. We travelled to 13 countries in 6 months and it’s kind of a makeover, Gordon Ramsey type show. The premise of the show is – every restaurant has to have a gorgeous view – but everything else is failing. Right out of school I managed to get onto Top Chef Canada and it was my first dive into reality TV – I fell in love with it. The Amazing Race happened and I’ve been working on that every season – Survivor was an interesting one, not a lot of Canadians work on that one. I’ve only worked on one season, mostly because it’s so hard to disappear for 8-weeks as our company gets bigger. Heading to Fiji would be a little irresponsible for me… as a business owner.  It’s a very fun show and would be a great vacation for me.” “What is the best and worst part about travelling around the globe with a show?”

“Oohh, I really like travelling – I’d have to say the best part of travelling is seeing so many places – I’ve been to over 50 countries but it’s also bitter sweet because although I’ve seen so many places, it’s only for a brief period. The best part – you get to have a sneak peek and a taste that makes you want to go back. In terms of least favourite thing… I’ve heard from people that have been in it longer than me and they start to miss their own pots and pans, cooking for themselves and home life. I don’t think I’m there yet but I do have a ritual of going to the grocery store and making a big meal for myself once I do get home from a location… you’ve been living out of a hotel and restaurants for 2 weeks.”

“What has been your favourite location to work in?”

“I have a love for Asia, so anywhere there… but the most recent place I’ve been to that surprised me was Slovenia. It’s bordered by Croatia, Italy, Austria and Hungary but nobody seems to go there because it’s not a very famous location. It has a very European feel to it and seemed to be a go-to place, I loved it. I also went to Malta last year, which was stunning and rich with history.”

“You won multiple awards for your documentaries, Who Let the Dogs Out, Pistol Shrimps and a Brony Tale – the story of grown men that love the animation, My Little Pony. Besides the My Pony doc, can you tell me about the other two?”

“A filmmaker friend of mine Brent Hodge of Hodgee Films was working for CBC a number of years ago when we met and really hit it off. We made a documentary together for CBC and were using a small crew, so I began to take on more of the producing responsibilities. Given my experience working on The Amazing Race with just a cameraman, a soundman and a team, it’s just the 4 of us and you’re basically left on your own, ‘you’ve got to figure it out’. Before realizing it, I became really good at producing and had gotten a grant from the Telus fund, so Brent and I made the documentary, Who Let the Dogs Out about the origin of the song. We intended it on being a 20-minute film but as we delved into it deeper, it turned into a full feature documentary. We traced the song back to ’84 and the song became popular in ’98. It was a really weird, quirky doc that we produced together. Pistol Shrimps was produced together with Morgan Spurlock from Supersize Me and was about a women’s rec league basketball team in Los Angeles. The women that started the league worked in film and television and actresses and writers working in TV were drawn to the team – a lot of the players are actually very famous actresses and TV writers. Pistol Shrimps premiered at Tribeca and Who Let the Dogs Out premiered at South By Southwest.” “What compels you about a subject or issue that makes you want to document it?”

“Comedy drama is not a very common genre… because most documentaries are formatted to be educational and not fun – I really love the idea of comedy documentaries because it’s a great way to draw in your audience. Once you have access to them and they’re involved – thinking this is fun and interesting, you make that turn and teach them something/make them feel something they didn’t expect from a comedy doc. I think it’s a great way to tell someone’s story and a great angle to approach a topic – I don’t believe it’s a genre of documentary that’s been explored very much, which is why I like it.”

“Beer glass or can of beer?”

“Would you rather travel to the bottom of the ocean or a trip around the moon?”

“OOhh… I like water but the ocean scares me. I’d say around the moon – it’s quiet in space too, which I’d like.”

“What can you tell me about Hot For Food with your partner at the time, Lauren Toyota?”

“She worked at Much Music as a VJ and had a passion for cooking, specifically vegan food. We’d been together for a couple years and both had a background in TV. She wanted to make a Youtube channel, so I helped her and within a year it blew up. We split up and I’m no longer involved with it but it’s where I learned to shoot – it has a large following and it was interesting.”

John has also worked on the Emmy Nominated series Vikings. He grew up on a dairy farm in a small town outside of Windsor called, Woodslee. It’s one of the largest Dairy Farms in Southwestern Ontario. They had more cows than there were people in Woodslee. It’s the reason for the name of his company, because it’s where his roots are and home is where the heart is.