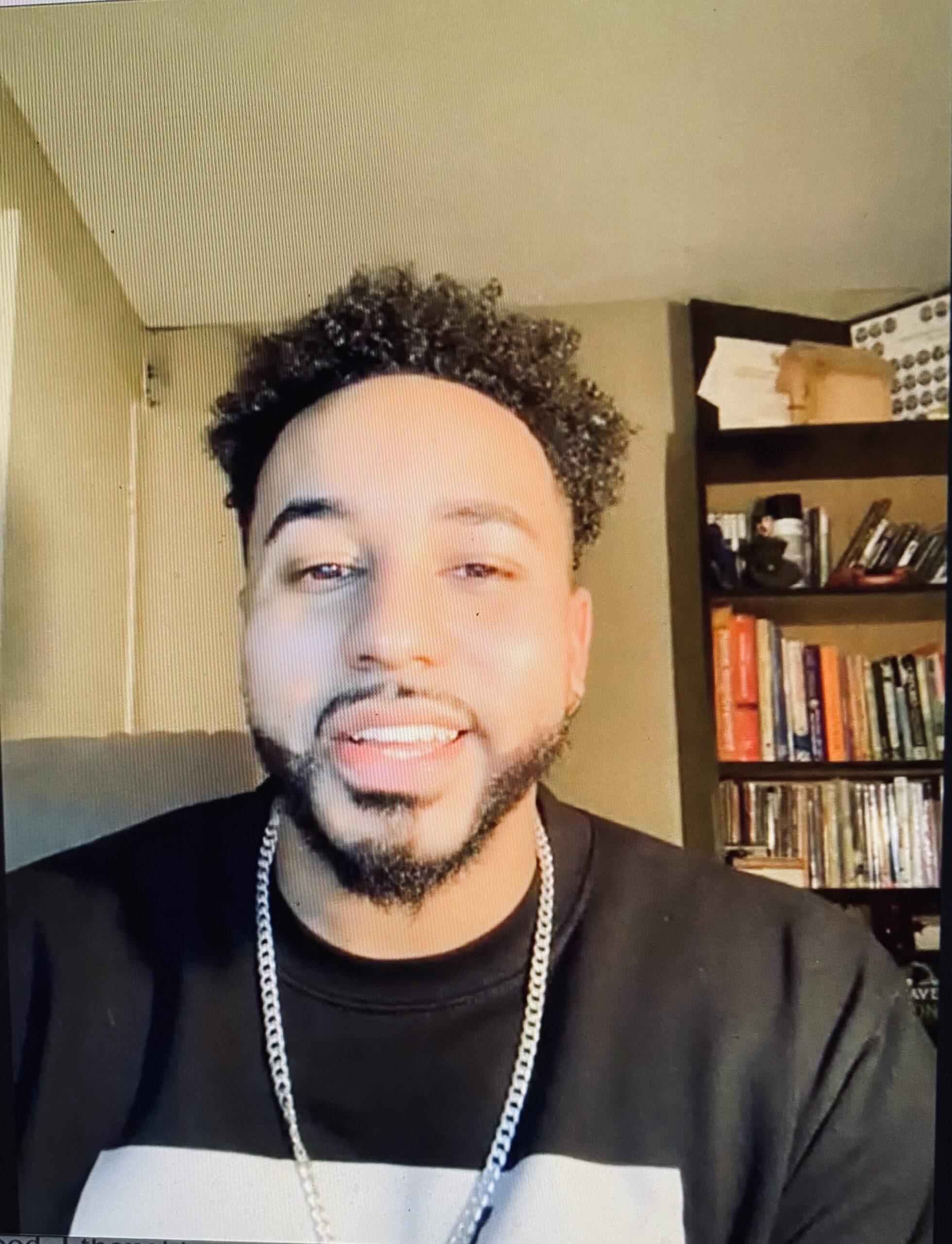 Music is magic and it has a plethora of perspectives depending on who is listening. When you catch yourself humming or singing to a song, have you wondered how it was inspired or where the lyrics were born from? History can spawn songs, especially when there is revolt, upheaval and protest! Society can act like a machine when we’re all on the same page and many times a side effect will be songs that reflect a moment in history that will live in our hearts, our minds and in our music for decades to come.

A young music artist – Fame Holiday was moved after the wrongful death of George Floyd to write and record Take Me Away, which just launched Feb. 4th.  Fame is a Mississauga based rapper with previous hit singles, Saucy, Confusing, My Thang, Finessing and albums, Made For This.  Temporary Love. Fame Holiday represents O.S.O.T (Other side of Toronto) and he takes that seriously. Fame’s commitment has led to his opening for multi-platinum artist, Rich Homie Quan and sold-out performances at iconic venues, including Lee’s Palace, The Phoenix Concert Theater and Theater Plaza Montreal. His music has been listened to on Flow 93.5 and hundreds of thousands of streams on all major music platforms.

His music is positive, it sheds the weight of a stressful day and it will put a little rhythm into your stride. Take Me Away was born from generations of people struggling for a voice and the video relates to the struggles of the Black community and minority owned businesses – with the understanding that, together we are stronger.

I had the incredible pleasure of speaking to this amazing young artist about this very personal song. I also provided the link for your listening pleasure.

HNM “Your new track Take Me Away strikes a very different tone in comparison to your past music.”

FAME “Most definitely, this one is a lot more personal. It’s how I’m feeling about what’s happening in the world and not seeing justice. Initially I made it for myself and not for the public, as a way to vent and get things off my chest and off my mind. After I played it for T-Mike (music producer), he told me I should put it out there, because he said it was a good song and it’s also relatable to many people in the community. As someone that has a platform and a fanbase, I feel that it’s important to talk about these topics, have the conversations and spread awareness about these things.”

HNM “When did you write Take Me Away?”

FAME “I wrote it and recorded it back in July, shortly after the George Floyd situation happened. There was so much traffic on my Instagram about police brutality at the protests. It seemed like every other day there would be more reports of people being killed by the police, so it became very frustrating – that’s when I wrote the song. It’s our job as music artists to make sure he’s remembered and to ensure it’s part of history.”

HNM “Your music video lands Feb. 4th. Did you want to tell us about it and who directed it?”

FAME “Absolutely, he goes by the name Trey Timeless. He’s worked with me on past videos but this is the greatest one we’ve made so far and it’s amazing to be able to share it with everyone. We really got the community involved – from young to old and in the middle. So many people came together for it, it was a blessing.”

HNM “What do you enjoy more… making the videos or creating the music?”

FAME “That’s a good question. When I write my songs, I actually visualize how I want the video to look, so I’d say it’s equal in terms of enjoyment. I really enjoy combining the two and I love being on the set and being in the studio, so it’s hard to choose one or the other. I enjoy the art of filmmaking and watching movies to see how they tie in the storyline and the characters. I’ve directed all my videos in the past, as well as this one.” 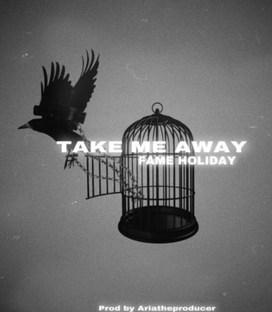 HNM “You say that you represent the O.S.O.T. Is there a distinction in the music produced outside of Toronto in comparison to inner city Toronto?”

HNM “Who do you want to reach with this song?”

FAME “I want to reach out to the youth. I know, not all police are bad people but there’s been a lot of them that have made bad decisions – which we’re trying to seek justice for. Social media is so big and people younger than me are reading – another Black male/female was killed by police. It’s really bad and if we don’t get justice for the brutality, they could grow up being afraid of the police… and I don’t want that.”

HNM “Your music has been on Flow 93.5 FM. What did it feel like to hear your music on the radio?”

FAME “I’ll never forget the first time I heard it on the radio. I had gotten the call in advance of hearing it on the radio.  I was sitting in my mom’s car and when it came on, we turned it all the way up. My mom and I made videos together and it we celebrated that moment together. It was a blessing. My mom is so supportive of me and loves everything I’m doing.”

HNM “When did you start getting behind the mic?”

FAME “I’ve been writing since I was 5 years old but didn’t get behind my first microphone until I was 11 or 12. Ever since then I’ve been working on my sound, finding my lane, finding out who I am and where I’m going. I feel like I’ve solidified my sound and I have my direction now.” 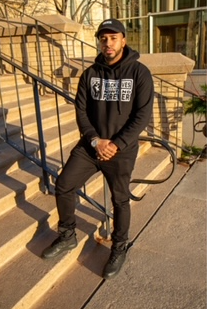 HNM “How much do social issues impact your music?”

FAME “It’s important to talk about… but it can be depressing and negative, so I try to make music that’s positive, uplifting and takes your mind off the bad things happening in the world. With this last track – I had to put it out there because I have the platform and felt it was my job to do so, but I enjoy making positive music and having people enjoy themselves.”

HNM “If you weren’t making music, what else would you be doing?”

FAME “That goes back to me directing my music videos. I’d definitely enjoy doing more of that and do want to continue to pursue filmmaking. I think I’ll always be involved in music though, either managing or putting together concerts and creating better opportunities for people.”

HNM “Who would you dream of collaborating with?”

FAME “In my books, it’s always been Chris Brown. Chris Brown has always been someone I’ve wanted to work with and I’d love to be part of his legacy. He’s my Michael Jackson, a true legend and someone I look to for inspiration. It’s gotta happen I have to work with him. I actually had an opportunity to meet him in LA when I was 16. I was shooting some basketball and he happened to be on one of the ball teams there. I was at the right place at the right time. I was able to tell him about myself, how much I respect him as an artist and how much he’s been an influence on me. I told him we have to work together someday, it’s gotta happen.”

HNM “Where did you record Take Me Away?”

FAME “Before the pandemic hit, I invested in a studio and have a room designated for recording and creating my music. I use Logic to record and mix.”

FAME “Oh… that’s tough, I have a sweet-tooth. I’d have to say cheesecake, I love cheesecake but it has to be strawberry cheesecake.”

HNM “If you could disguise yourself for 1 day as someone else, who would it be?”

FAME “As an artist… it would have to be Chris Brown. I’d love to spend a day in his shoes to see what his life is like.”

Fame Holiday is an incredible young artist that loves his community. He wants to unite people through his music and he is making leaps and bounds. Please support a great Canadian music artist.