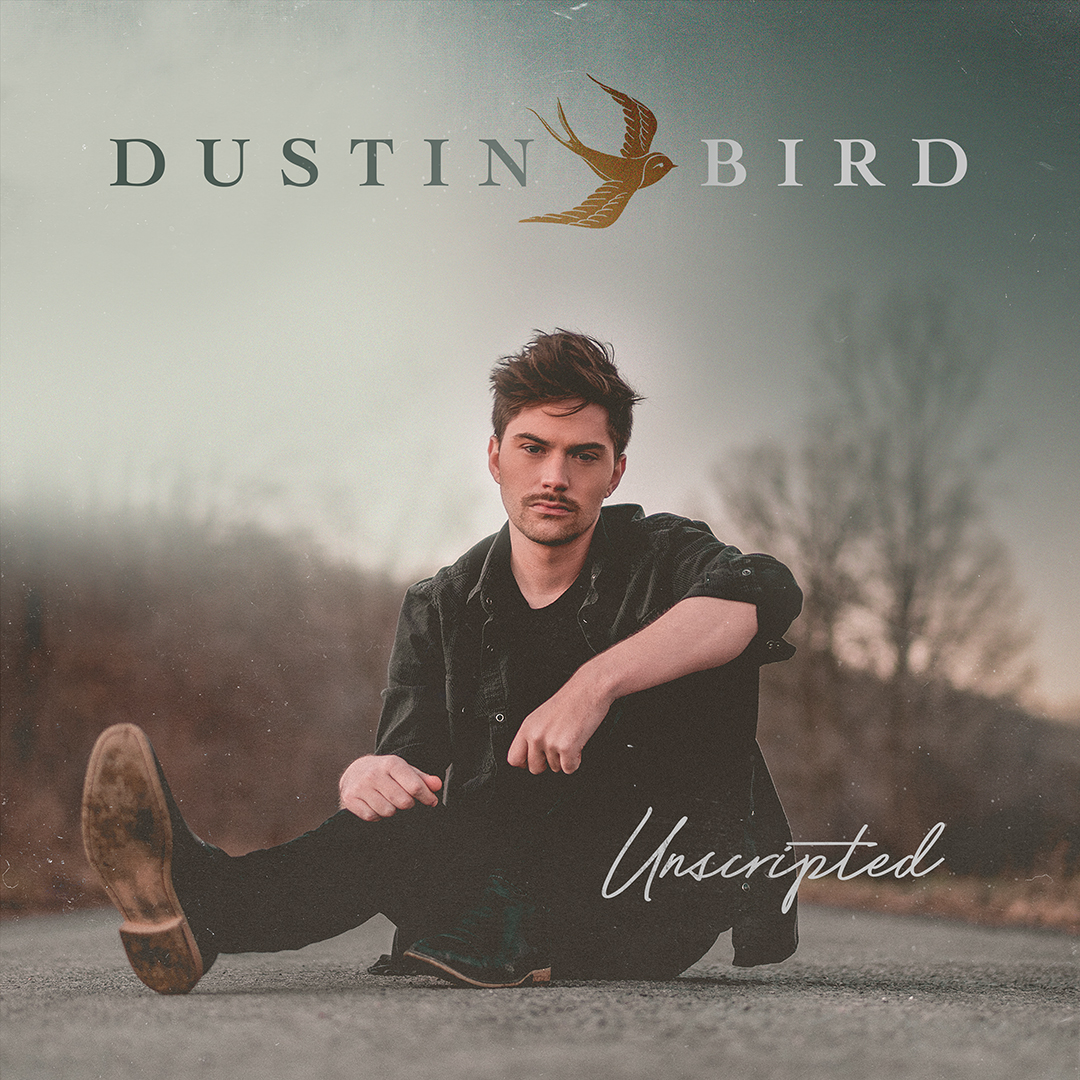 Ever had a song stuck in your head that you don’t want to get out? Now image, an entire album. Dustin Bird signed with Open Road Recordings and released his debut album, ‘Unscripted’ on February 5. This young man knows how to channel songs that feel familiar – but in an old friend way. Dustin is the complete artist – much like a painter that becomes inspired and creates a masterpiece… Every piece is personal, it’s authentic, it was created organically and this album has a little something for everybody. His art is music but Dustin relies on all his senses to create. Much like the roots of a tree, music starts with a strong foundation and sometimes it can reach far beyond the pond. His new album, Unscripted is also the mantra for his approach on the songs that created it… his music is not cookie cut, it’s not a riff stuck on loop and it is unlike any other experience. I’ve listened to the album and have bonded with a few songs already, but the more I listen to it the more the entire album resonates with me.

Dustin Bird’s debut album, Unscripted released on February 5. He wrote and produced every song on the album except for the title track, Unscripted, which was co-written by Tyler Shaw, Dave Thompson and Jeff Dalziel, and produced by Dalziel. From the disco-funk groove of, It Ain’t Me and Rolling Stone, to the sweet modern country ballad, Every Little Town, Unscripted really shows the diverse talents of Bird. The lead-off single, Broke and Lonely, will be released to Canadian country radio on March 1. The single captures the raw emotion of feeling alone, with an underlying message of hope and encouragement.

This was my second opportunity to chat with Dustin. He is a class act that always brings his best, he radiates positive energy like the sun and he is extremely generous with his time…

HNM “I listened to your new song, Unscripted and I have to tell you that it sounds like a number 1 hit.”

DUSTIN “Thanks, that was a fun song to do. I didn’t really have a hand in producing that one, so it was nice to just show up, sing the song and focus on that. It’s a great song, it became the title track of the album, it represents really well.”

HNM “I’ve always been curious about the order of songs in an album, how is that determined?”

DUSTIN “You can take many different approaches and it also depends on what type of album you’re making. When it came to this, there were only 2 songs that were new and made specifically for the album. The rest of the songs were already out as singles and we tossed around ideas for the title song, because a title song can really anchor it to an idea – it gives it an identity and says what’s its about. With the title being Unscripted, it meant that there was no specific direction, no script. I had to determine how I wanted to deliver every little piece of me to people as effectively as possible, so right off the top of the album is – Rolling Stone, followed by, It Ain’t Me and then Broke and Lonely. It’s a little fast-paced but then, when you get into the second half – it’s country song, country song, country song. I wanted to show a little more depth and diversity as an artist outside of country music.”

HNM “The record label you recently signed with, Open Road Records – how much control do they have over which songs go on the album?”

DUSTIN “They definitely have a say but ultimately, it’s the team’s dime and they’re delivering. Open Road has been an amazing creative partner, they love what we do. For the most part, I’m really only delivering stuff that they’re vibing with and that I really love. Whatever ends up on the final project, is something that we all clicked with and loved. It’s very much – ‘you make it, send it our way and we’ll figure out what to do with it’. With Broke and Lonely, I just wrote it, it seemed like a real place and was an honest song. They came back to me to say, ‘we love it, we haven’t worked with a song like this before but we’re going to figure it out’. They’ve been great and they’ve worked really hard on this project and they continue to work hard up to the March 1st release. It’s great because I can continue to create in that frame of mind and don’t ever feel pigeon-holed.”

HNM “Do you feel like you could go in a new direction on your next album – if you chose to?”

DUSTIN “Yes I do. I’m always considering how to stay as true to myself as I possibly can. I’m influenced more by sounds than I am by specific artists. If I hear a sound or a lyric, something that catches my attention – I’m influenced by all types of different things, which gives me this vast array of sounds to pull from, to produce from, to write from; it’s an ocean of possibilities. However, it’s easy to get lost in that and get pulled by the tide a little bit. I’m always anchoring myself to who I am by taking those ideas and sifting through them to find the ones that are most true to me. I won’t even know what the next record is about until it’s finished. Instead of anchoring it to one sound or one idea, I’m just anchoring it to who I am and what my message is. A lot of it comes down to the song and how I can best serve the song, with the lyrics and the rhythm of the lines, so it best communicates that idea in the most ‘true to me’ way as possible and the most effective way possible.”

HNM “I want to make a prediction right now, that Unscripted and People both win awards. They’re my two favourites off the album.”

DUSTIN “Because the label has been so good in promoting it and putting all hands-on deck, we’ve had tremendous support from the DSP’s, from Spotify, Apple, Amazon, Youtube music; people are really getting behind the record as a whole. The beauty is the diversity of the record – it gives people different points of entry. If they’re more country orientated, they’re probably going to love Every Little Town but they may not like It Ain’t Me… it all depends where you’re coming from.”

HNM “How long did it take to decide which songs would stay on the album and were some of these songs written long ago, that deserved a resurrection?”

DUSTIN “Every Little Town and Rolling Stone had been sitting a little less than a year. This entire record came together really quickly in retrospect, even though the process felt like a long time. We pulled those songs from a pile of 50-70 songs I had written over that period that really felt like me. If we’re looking for a single, we’ll whittle it down to 3 or 4 options… but that can be a long process. Generally, we’re not fishing through 100 different songs at the last minute. Usually, throughout the process of writing them, we’ll lean on the ones that we really connect with. If I’ve written a song that I really love, most times I’ll demo it… but if I’m on the fence with it, I might leave it in the voice notes. Often, if I feel really passionate about a track, it somehow makes its way to that final selection process. We’re usually left with a few tunes that we all love, to select from.”

HNM “How polished would those songs have been, the ones that were revisited?”

DUSTIN “Most of the tunes are me playing them on guitar into my phone. Every Little Town had a full-fledged demo done and Rolling Stone had a real basic demo. Broke and Lonely didn’t have a demo but we decided that it should be demoed, so I only did a minute of the song, to show what it would sound like in general. A lot of artist’s in Nashville will do it differently – they’ll create the demo as they’re working on it. By the time they walk out of that room, they have a product that they can give to the publisher. A lot of times, I need a song to sit and I need to move on from it because a lot of creators will believe it’s the latest and greatest, the idea that the last thing they created is the best thing… until you create something else… and then that’s the best thing. It’s a big whittling process, the song-writing is one big multi-tier process.”

HNM “With Open Road Records, is there a multi-record contract attached to that?”

DUSTIN “We plan on doing quite a bit with the open road. We’re seeing how this album resonates with people and connect the songs with as many people as possible. There’s quite a bit in the works with Open Road and we plan to have a healthy long-term relationship. It’s gonna be a fun ride and the biggest question mark is – when are we going to get back out there on the road? As of right now, all the promotional efforts are being done here. It makes it easier and more convenient, a little easier to make new music as well as promoting, but at the same time it’s restricting and I can’t connect with people on the same level. Hopefully, by the time the next album comes out, we’ll be able to play for a live audience. There’s definitely a want and need to see live performances.”

An extraordinary talent that we are sure to hear great music from, for years to come. Dustin Bird mixes up songs with ingredients we can all eat up and come back for more. It’s music for me, for you, for your dad and your peace of mind.