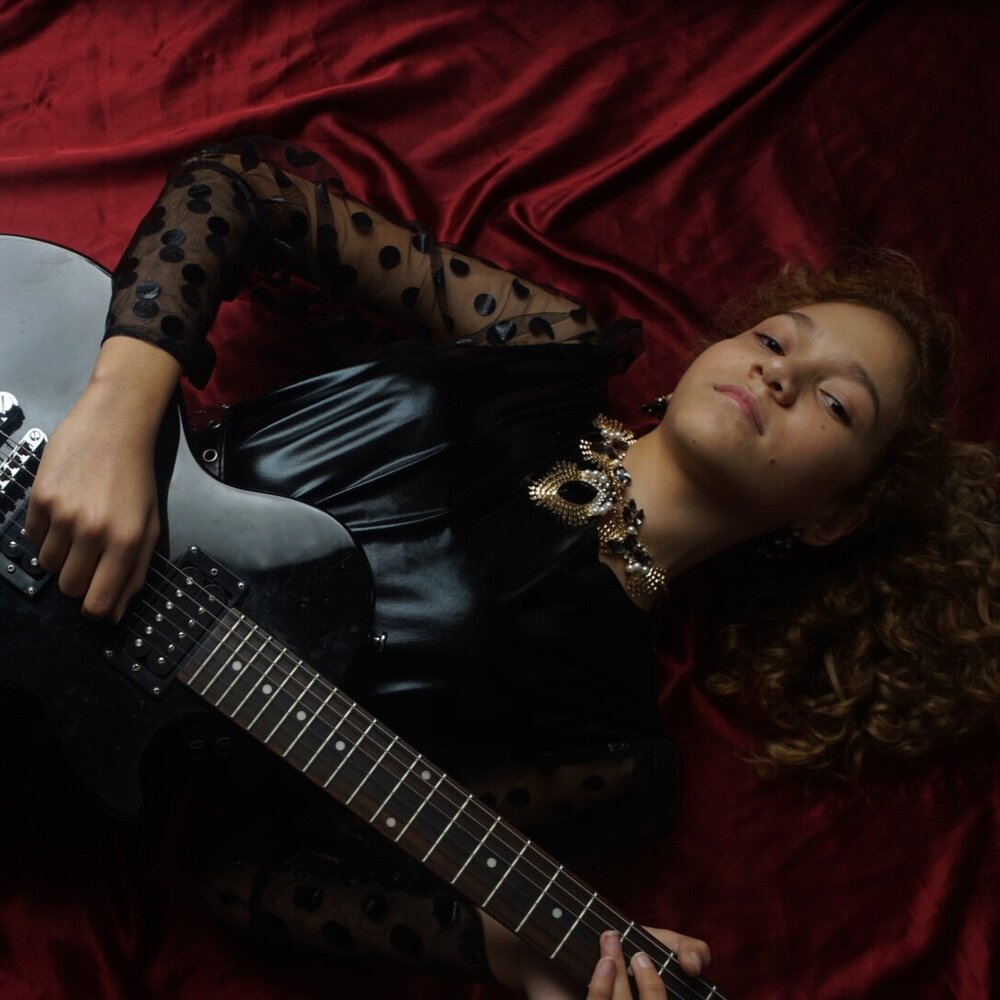 Music is the eighth wonder of the world. It has an impact on all ages of society. We sing to babies when we want to calm them or excite them. It’s in our DNA but how many of us can harness it into a successful music career and do it before starting high school? In one word, Azalyne can! She is a 13 yr. old music artist/singer that seems to be able to channel a golden voice far beyond her thirteen years. When I was 13, the only channeling I did was on the TV. Azalyne began performing at 9 or 10 and she has already played more than 250 shows. She is a young rising star with her first single, You Are Mighty, streaming on all platforms. The song is still growing and continues to attract listeners. Azalyne’s music has over 83K streams and has sold over 25k units worldwide.

Her numbers are about to smash the ceiling with the release of her latest and very personal track, E-Girl. It was just released a few days ago on Jan. 29th. In addition to this very young creative music artist, she also runs a monthly open mic event at Kops Records in Oshawa. Azalyne has also been part of a few workshops in the School Board. Speaking to kids about issues like bullying, songwriting, and music. Azalyne strives to champion inclusion and acceptance of all platforms and communities. She is carving out her own path with her own vision and her voice is the vehicle to carry her on that journey. I’ve listened to her music and had to keep reminding myself that the angelic voice came from such an amazing young talent. She tells me she was singing before she could talk and I definitely believe her. She sings, she plays piano, bass and guitar. She’s a songwriter, a composer and a co-producer and she was my Zoom guest.

HNM “You have some instruments behind you. Do you play them?”

AZALYNE “Yes, I play guitar, bass and keyboards. On my song E-Girl, I play the piano and the bass. Basically, on every one of my songs I’ll play the piano but sometimes I’ll also play the bass or guitar as well.”

HNM “Where did you learn to play the piano and guitar?”

AZALYNE “My mom bought me a piano when I was 4 and I started taking lessons. I taught myself bass and guitar.”

HNM “What would you say inspired you to get involved in music?”

AZALYNE “Since before I could talk, I was singing. If we were sitting around a fire, I’d be singing about a bird in a tree or something. I’ve always loved music, so my mom brought me in for singing lessons and piano lessons. It was my favourite thing to do and it’s become my passion in life.”

HNM “This new song E-Girl, can you tell me what it’s about?”

AZALYNE “An E-Girl is a type of style that blew up on Tik Tok. It’s basically a modern ‘emo’ but more feminine. Sometimes people will feel inferior to other people and sometimes teenagers can’t do anything without being made fun of. I was also poking fun at the E-Girl stereotype.”

HNM “As a young music artist, do you find it difficult for people in the industry to take you seriously?”

AZALYNE “Yes, but sometimes people won’t take me seriously until they hear me sing. Many times, when I show up to a gig, people won’t really listen until the end and then they’ll come up and talk to me afterwards. I’ve built up a pretty good fan base, so it’s a little easier but sometimes it’s still hard.”

HNM “What do your friends say to you at school and do they support you or do they just want to hang out and play?”

AZALYNE “I’m actually homeschooled, but in terms of my friends – they’re really supportive. We do play video games sometimes but they’ve been very supportive.”

HNM “Do you have a large family?”

AZALYNE “I have 5 people in my family but I usually hang out with my grandma and grandpa.”

HNM “What would you say to other young kids thinking of starting a music career?”

AZALYNE “A lot of times, people will be telling you to just be a kid and focus on your studies… but if this is what you want to do then you can do it for free. There are programs you can download that will help you to make some beats. If you have a piano, a guitar or any other instrument – keep doing it and you’ll get better at it. You’ll be able to make your own music pretty soon.”

HNM “How old were you when you started singing?”

AZALYNE “When I was 4 but I’ve been singing my entire life.”

HNM “When did you start to take it more seriously?” 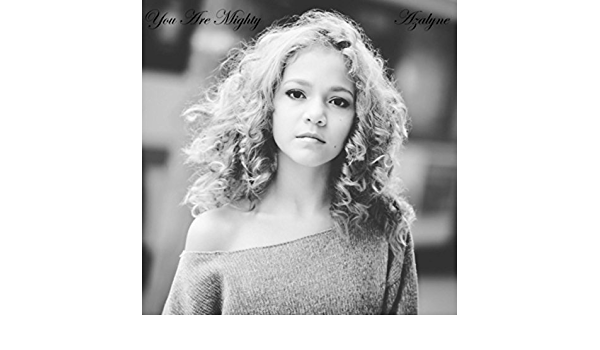 HNM “Do you still train your voice or does it happen quite natural?”

AZALYNE “I have a vocal coach but I prefer my own sound when I’m writing songs. I’ve recorded 6 or 7 demos.”

AZALYNE “No, it’s my second single. My first single was You Are Mighty and it’s a bit of a jazzy song. I didn’t think it would do that well but it did really well on Spotify and it’s become quite popular. I’d like to release a group of singles this year, maybe a single every two months. This is the first single that I feel really represents myself.”

HNM “This song E-Girl sounds good enough to be on the radio. Have you tried to get it played on there?”

AZALYNE “I’m applying to get it submitted onto Spotify but I’m not applying for the radio. It would be cool if it did.”

HNM “When I listened to your music, your vocals sound similar to Rihanna. Is she one of your inspirations?”

AZALYNE “I really like Rihanna, I think she’s amazing and I’ve done a few of her songs in the past. For inspiration though, I like to listen to Frank Wilson. He’s my favourite artist of all time.”

HNM “What do you do for fun when you’re not making music?”

AZALYNE “I think making music is fun, so if I’m not recording, I like to use Ableton. Other than music, I really like videogames and I like to read. I also enjoy drawing a lot and recently got a drawing book for my birthday – so I’ve been doing more drawing.”

HNM “What inspires your lyrics when you write songs?”

AZALYNE “During this quarantine time I’ve been writing about what I see. When I was younger, I’d write about things that I’d also seen but hadn’t been through. With the song, You Are Mighty, it’s something I’d been through. When I was 9, I was in a big production and everything was going well. One day my brother and sister came to the production and I was kicked off the production. My mother is Brown and I know it was because of her colour. I was really excited for it but because I’m biracial I was kicked out of the production. They sent me an email to tell me I wasn’t good enough but the music director called me and told me that it wasn’t the real reason. I was really heartbroken about that, so I wrote a song about it. I also wrote a song named Stalker. I’ve never stalked anyone but I wrote a song about it. There’s a lot of things that inspire my music, sometimes other songs, things I’ve seen or been through.” 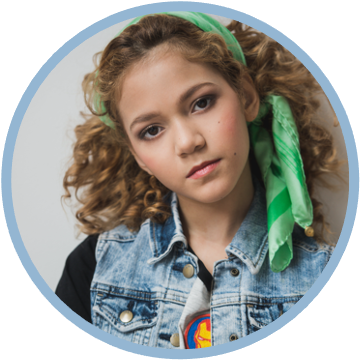 HNM “On your new single E-Girl, there’s a note that you carry for a long time. Is it difficult to hold a note that long?”

AZALYNE “Thank you, yes it was actually hard to carry it that long and I had to record it a few times. I worked with my vocal coach and she has a lot of different techniques that we worked with. I knew the long note was going to be really hard, so I worked on raising my diaphragm, you can’t slouch, you can’t put your shoulders up. Even when it feels like you’re going to run out of breath, you can squeeze a little more out of your diaphragm. There’s a lot of different things that you have to think about when you’re holding those long notes.”

HNM “Do you want your music to get people dancing or get people thinking?”

AZALYNE “I think I’d want to do both but I think mostly thinking because I do a lot of thinking.”

HNM “Where was this song recorded?”

AZALYNE “I work with a few different producers. This song was recorded with producer, Sheldon Moore; he’s also where I’m from (Greater Toronto Area). I’ve also worked with KR at Sandbox Studios. I’ve also started working with O’Connor – he’s an amazing producer and a lot of fun to work with.”

HNM “Do the producers also guide you or are they primarily there to support you?”

AZALYNE “Producer styles can sometimes influence stuff but I’m very much a part of the process of creating my music… because I write them and compose them.”

HNM “Have you ever considered collaborating on a song with another artist?”

AZALYNE “I have thought of that a lot. I have a lot of musician friends, so I’m thinking of doing that for one of my songs.”