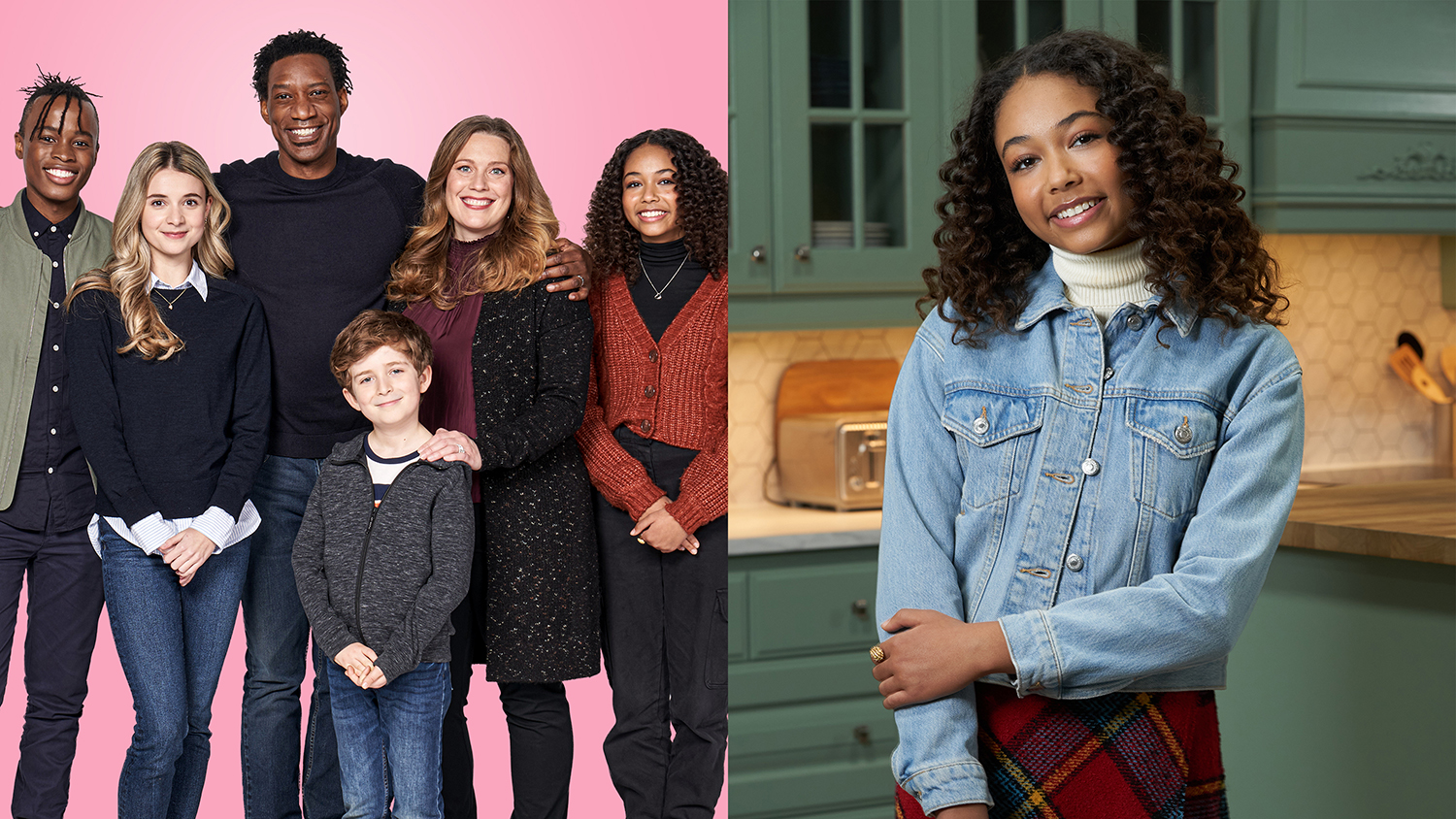 Is it safe to say that TV, Film and Music help shape society and its views? It can become a political stage, a true event that should never be forgotten and sometimes it’s for pure entertainment and escapism… we’ve all been craving it. Given the fact that many of today’s important issues can be addressed and exposed on television, is power. It can become our prescription for more understanding, less ignorance, calm and a better society… but first we need to be hooked, to be invested.

On April 19th, Canada (Super Channel) and the US (BYUtv) will meet The Parker Andersons and Amelia Parker. The showrunner is Anthony Q Farrell (The Office, Secret Life of Boys, Little Mosque on the Prairie) and he has curated an incredible team of diverse writers to help lend their own personal experiences and ideas to each episode that will ensure the stories are an honest representation in its truest form.

Another star of the show is Agape Mngomezulu, who grew up in North Delta, BC. He’s starred in the CW’s Supernatural, CBS’s Twilight Zone, Britbox’s Bletchley Circle: San Francisco and Hallmark’s Falling For You, which was nominated for a 2019 Leo Award for Best Male Supporting Performance in a Television Movie.

I had the amazing privilege of speaking to this young man, now living in Toronto.

As we began our introductions, I was caught off guard by Agape’s Canadian accent. In the series – The Parker Andersons, he plays a 14 yr. old with a British accent… very convincingly. Agape is actually born in Africa… and he’s actually 24 yrs. old.

HNMAG “You’re the first young actor I’ve spoken to that has had to work an accent into his character on a television series. Was it challenging to incorporate the accent?”

AGAPE “It wasn’t the easiest thing but luckily we had coaches and it also makes it easier when you hear other people sounding like it’s supposed to.”

HNMAG “Congratulations on landing your role in this series. When does The Parker Andersons debut on television?”

AGAPE “It comes out on April 19 in Canada on the Super Channel and on BYUtv in the US on the same day.”

HNMAG “Can you tell me your character’s name in the series and how you landed the part?”

AGAPE “My dad is Tony Parker and I play Nathan Parker, the oldest sibling and brother to Amelia Parker, who has the other related show. It was a regular audition process to get the role but I had originally auditioned for the role of Nick, who’s the cousin… but then they asked me to read for the role of Nathan – they thought it would be a better fit. As soon as I read the description, I felt like it was for me.”

HNMAG “It looks like you have a lot of fun with the character.”

AGAPE “Yes, with it being a sitcom, there’s always different situations written into the script. Suddenly there’s a goat on set, let’s work with it (laughing), cool. There’s a bunch of random stuff happening, it’s really cool.”

HNMAG “How many episodes have you already taped?”

AGAPE “We just finished taping the last episode for both shows. They have 10 episodes per show. We did about 20 episodes in 3 – 3 ½ months. It was  a lot but, just being able to work during covid, was great. It was also nice to be working in a space with a creative group of people doing what we love and having fun doing it.”

HNMAG “Considering that you play a character in a series with a very diverse cast, do you feel any added pressure, as an actor to represent the message of diversity in the show?”

AGAPE “Definitely, when you have a cast that’s 50% Black, you do have a certain responsibility to tell particular stories that can’t be told by other shows, films or media that don’t have the representation. It’s largely helped by the fact that the writing room is filled with BIPOC men and women, which is very diverse in itself. You have people telling their own stories within that room as opposed to telling a story about someone I know nothing about and it didn’t turn into caricatures of situations. Our showrunner Anthony (Q Farrell) helped push for that as well. Any director that would come in, whether they were a person of colour or not, were open to addressing any concerns with something in the script that I or another actor might have an issue with… and try to tell it in a way that stays true to the show while staying accurate, relevant and capitalizing on the opportunity you have. With such a diverse cast, we tackled a lot of difficult issues and I feel that the writers and my co-stars did a great job of it.”

HNMAG “You’ve been in some great TV, CW’s Supernatural, CBS’s Twilight Zone, Britboxs’ Bletchley Circle: San Francisco and Hallmark’s Falling For You, as well as being nominated for Best Supporting Actor. Where do you find your drive?”

AGAPE “From the time I was 11 or 12, in grade 8 – I knew this is what I wanted to do, I just had to figure out how to do it. Having spent the first 10 years of my life in Africa (Swaziland), I had to adjust my mindset. Vancouver is one of the best places to do that and the industry has only grown since then. I remember one summer when I was in high school, I was doing some background work to see if this was an environment, I could be part of. This one night I was on set till 3 or 4 am in downtown Vancouver and had to get back to North Delta. I didn’t get home till 6 am – I felt like it was the most intense way of understanding what this film/TV life is. It’s been an innate feeling of wanting to do it, since I was young – I love it, I wanna do it, lets go!”

HNMAG “How does your family feel about your success?”

AGAPE “They’re incredibly supportive but when I was younger, it was a little scary for them, having their 13 yr. old telling them that he wants to be an artist/actor. They’re like, hoping it’s going to change in the next 5 years after I graduate… and it didn’t. After my family saw that I was taking it seriously, putting in the work, going to school and was happy – they were ecstatic for me.”

HNMAG “What’s next for you since you’ve wrapped on the shooting?”

AGAPE “We wrapped in January and they’re still doing some ADR stuff in post to make sure it’s ready. It was kind of weird, when you’re shooting you’re inside this bubble, you’re getting tested and working – then once you’re out you realize this is what the rest of the world is like. I’ve just been staying home and going outside as little as possible. I’m still in that mode right now.”

HNMAG “Do they put any restrictions on you while you’re at home waiting to shoot again?”

AGAPE “Not really, it was more about staying within the provinces regulations and using common sense to not put ourselves or anyone else in jeopardy. Luckily, we never had any cases throughout the entire shooting, which is phenomenal. I think everyone took that to heart and did their best to be responsible and smart about it.”

HNMAG “What are you doing for fun these days to keep yourself occupied?”

AGAPE “I’ve gone back to video games (laughing), which I wasn’t able to do when we were shooting because I could spend hours on it. Whenever the weather is nice, I’ll go on walks and sometimes meet up with friends to grab a coffee, maintain a good balance of staying inside but also getting out for sunshine and fresh air. I’m going to start going on runs but I need to build up the drive to do it, I haven’t worked out in awhile (laughing). I’m also still doing auditions as well.”

HNMAG “Have you ever considered moving back to Vancouver or the US for work?”

AGAPE “Being from Vancouver, I’ve worked there for 3 years and came out to Toronto to see how things were on the East Coast… then boom, 6 months later the pandemic hits. I’ve thought about coming back; it’s where my friends and family are.

I’m auditioning out there via self-taped and have also sent them to LA, so I hope to get some work soon in Vancouver, I’d love to come back. It’s a beautiful city and that’s where my heart is.”

HNMAG “Where is the series filmed?”

AGAPE “It’s shot in Toronto and all of the cast are local.”

I had an extraordinary chat with Agape and I tried my best to get him to come home… if his family is reading this. Let’s hope that he can find incentive through work and come back to realize… we have enough work for all great actors! Till then, we will follow Agape on his new series, The Parker Andersons.