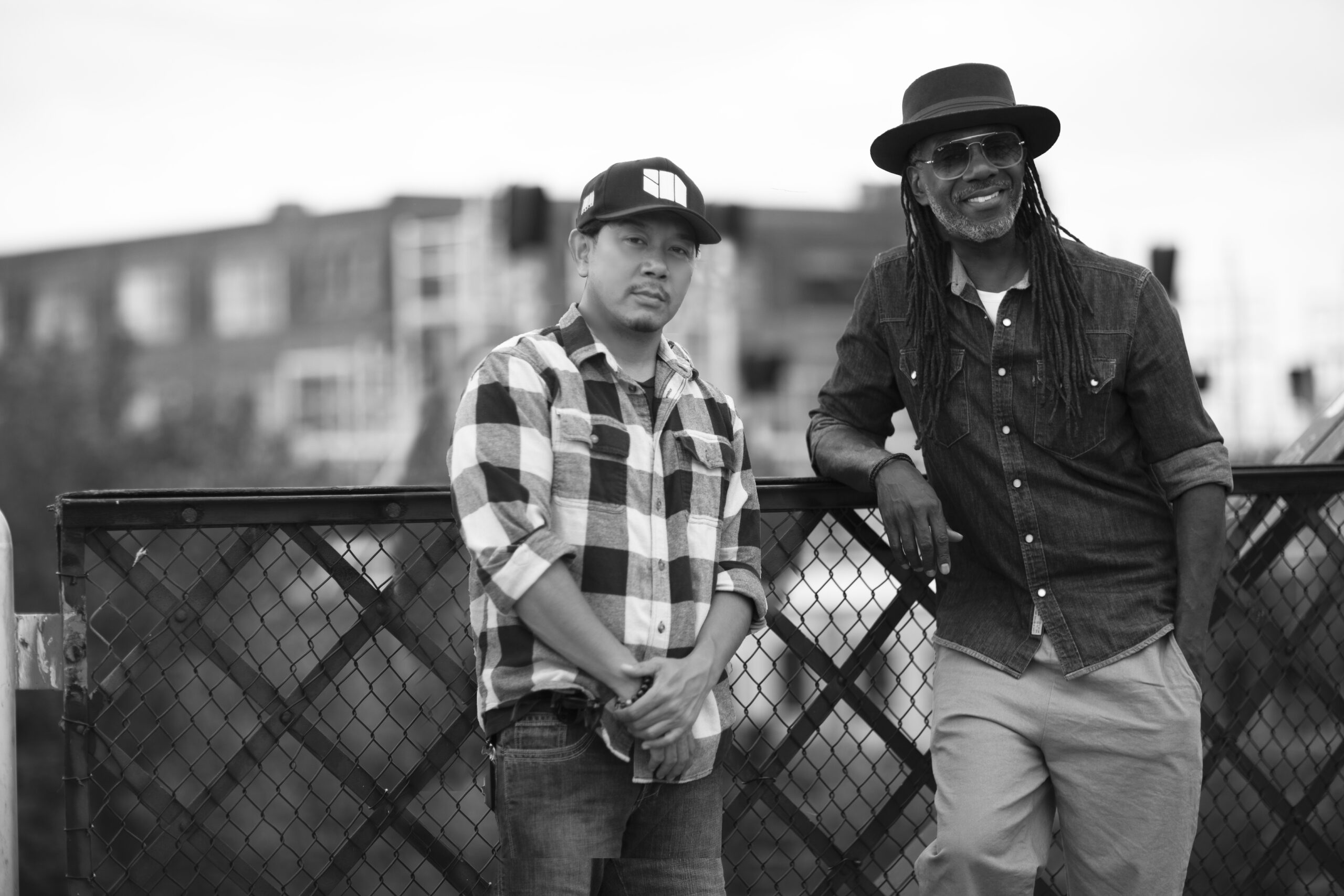 Have you ever tried transitioning from kind of task to something completely different. I have. It’s not that easy, but for Junior Lopez and Kevin Barton, it was rather simple to go from making music to making animations. Junior once discovered while using Adobe, I got better and better at using it and started off from there. That’s how his interest in making animation got linked with making music, but he had also been working with Kevin at Universal Music in 1997. From their humble beginnings of making marketing promotions for Universal Records 10 years ago, they want on to do even better things. I spoke to the two gentlemen about their origin and their latest project, a Smithsonian project that would turn out sexy. How? Read on.

HNMAG: So both of you have gone from music to animation. Was it a tough process? Could you each explain how you got there?

Junior: So I think music was our first real love, growing up we always sort of wanted to create our own music. I also used to DJ a lot, and that was our main thing. We would create our own flyers, so I used Photoshop and learned to use all the Adobe suites to make our own promotional items. We wanted to create our own stuff, our own swag, posters, flyers, videos to promote the music. In learning all that, I kind of started doing animation from there. As it took off, I figured I could make more money off animation as opposed to music. At least for myself.

Kevin: I had a different route. I’ve been in the music business and I kind of bounced around in between music and kind of got more into the marketing side. I took some time and then went to film school, at Ryerson. I really wanted to learn visual languages so I took courses in digital design, photography, and film. Then meeting up with Junior and working him in his animation work during that time period, I decided maybe it was a good idea we just combine our efforts and just do something. So we teamed up as Illworks.

HNMAG: As someone who’s animated myself, I understand it can be a tedious process. How do you keep maintain your business with all the processes that go into it?

Kevin: When it comes to animation, I am the business mind here. I am organizing and supplying with my own creative outlets.

Junior: For the heavy lifting in animation, there’s a lot of learning. I took a crash course in the UK to learn 3D animation. I was doing After Effects and 2D stuff before that. Never went to college for that, I just took those weekend crash courses for $250 from Friday to Saturday or Sunday. A lot of online Youtube learning, and then a lot of late nights just learning to create my own things and stuff for other people. When I started getting work from other people, it kind of forced me to learn more. But mainly, it’s the love for creating is what keeps you going.

Kevin: For me, it’s the other side as I’m the director and it’s about visual storytelling. I edit as well, and Junior hates editing but I can sit and edit. So it’s actually something that you have to LIKE, and I think where I got it is from sitting in recording studios. If you have the discipline to sit in there and record a track, create beats, and do something over and over until you really feel like it’s something that’s perfect.

Junior: That, and the love for something. It doesn’t seem like work at a certain point, which kind of lets you learn more and work a lot harder at it.

HNMAG: So you find the work goes smoother by you two working in different fields of it?

Kevin: Yeah, when you build teams, in doing music and any kind of creative endeavour I find that artists don’t make the best business people always. I think that for teaming up with people, everyone has to know their role, and you really have to find that team. I know where my skillsets are really strong, and he knows his so I think that balance works out, but it also goes both ways (laughs)

Junior: I think also to add to that, Kevin was my boss at Universal. He was there before I started, so working with him in that role was an easy decision to make because he handles the business stuff and I know he can handle a lot of the stuff I don’t want to handle. I’ve seen him work at all these different companies and I’m just more behind the computer myself at 3AM.

Junior: Yeah, Kevin’s out there by himself. I’ve seen him do it because it’s great. He takes that part of the job that I don’t have to focus on. I was trying to wear all the hats before, but there’s only so many hats you can wear when you’re learning all the stuff. It’s best to work with people who are better than you.

HNMAG: You’ve already gained a lot of credits. How long has Illworks Studios been in business?

Junior: I’d say around 12 years. I was doing small jobs here and there at first, but then I incorporated it.

Kevin: I had my own company where I did all my work. Our idea to combine was based on the idea I had a list of clients. That’s how we got together.

HNMAG: Now about your latest project, just how do you plan to make Smithsonian animation ‘sexy’?

Junior: (laughs) When you think of Smithsonian, you would think of museums, historical, lot of more serious stuff. Whereas when we took the job and we had some ideas to brainstorm, they wanted to show these different maps and different layers of maps. We thought if you do something in 3D and you know, make it not your average learning channel kind of animation. We took a 3D route, made it where maps were lifting up or peeling off so you can see underneath the map. We just tried to take it to look like something that you don’t normally see.

Kevin: When you look at a subject matter, and I think this is a strength that a lot of people see when they come to us, for us it’s how to articulate what visual language really is and being able to identify the brand, what the story is about, the pacing, the voice, and the music, then take all those things into consideration. It always amazes me that someone can just send Junior a voice-scratch and an idea. Then come back with 4 or 5 more ideas then I can say I love this one, and escalate it to another direction. But the ability to see it beyond what it just is, that is what makes it sexy. Also, we have such a strong music background, it’s always thinking of terms in how would I watch it, and how would this be perceived by the public. I always feel we are doing stuff for people that understand what we do. To be entertained is what’s most important, and that reflects most in what we do in our work. Gotta be entertaining, one has to walk with that story, or elevate that story. That way it can move forward.

Junior: Exactly. When we do our animations and our work, I’d like the viewer to acknowledge the animation as something that was cool while they’re watching it. Not just something as a tool to get some information across. Something that makes them stop and say “Hey, that part was actually cool.” it’s not just a device to tell a story, but tell its own story.

HNMAG: Can you tell me a bit about what happens in Secret Cities?

Junior: Secret Cities is a show about when you look at a city and you see it like it is today. It looks like it’s always been like that, but the whole purpose of Secret Cities is to look back in history and see what’s really behind the city. For example, in Paris. You might not know there is all these catacombs beneath the city, so for Paris, we have a map where we peel the surface up and then you can see the catacombs underneath it. Another example is New York, they wanted to show how many gambling spots there were back in the 1940s, so we’re showing history of the city, stuff you wouldn’t know had happened.

HNMAG: You’re also looking to get back into music, too. How do you plan to balance out music and animation together?

Kevin: I think that when we talk about getting back to music, as we are on the road to animation, we are creating things for clients, but we will soon set our hearts and minds into productions of our own accord. As part of doing that in animation, that music will always be a big part of everything that we do. So matching those visuals with the right kind of music is what we’re really looking for, in producing music or songs. Incorporating our love of music into the work that WE do because we believe that what you see is what you hear, and that the stuff we put out there is matched by really great audio and scores. It’s a natural progression for us, what we do now is try put cool music to something. Make sure it’s matched, the pacing, and figure out what would be cool if that piece of music was under something.

HNMAG: Have you ever added your own soundtrack to animations you have made for productions?

Junior: No. Not yet. Very basic stuff, but not really.

Kevin: For a lot of clients that I do editing work for, they count on me to choose the music and sound design for it, so I constantly have to search for stuff like that, but getting more around to reaching out to producers and stuff we work with is our next stage. Hopefully we’ll be doing it by the end of this year.

HNMAG: What are some of your other future plans with working in animation?

Junior: We have a few different ideas that we want to do. We were considering making some animated shorts and entering the festival circuits. We always had some certain ideas for documentaries, also some ideas for animated series.

Kevin: We’re in the early stages, we do have some crew members that are notable writers. We’re in the creative writing stages right now, and pitching ideas to see which ones we’ll land on. We’re hoping to get something out this year, it’s just that we’re taking on a whole volume of work. This year we want to insure our work for our clients first and foremost are up to par and we’re delivering on that and getting those processes really humming now. Junior’s hired an amazing team of animators to work with, and building some really good teams. That’s where we’re really doubling down our focus so that the work we do is great, and the teams we have are great, and as we do that, we can carve out more time to do our own projects.

This was one of the most fun conversations I ever had. Seeing as they’ve already made a name for themselves, and have progressed greatly, it is astounding to see where this company will take them. Learn more about Junior and Kevin’s work on their official website. It’s extremely well-made.