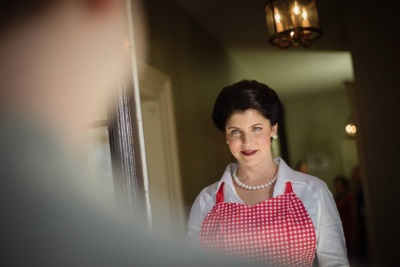 Remember the 1950s TV show, Leave it to Beaver? Remember the 1970s movie, Texas Chainsaw Massacre? Imagine if these two quintessential cinematic “parents” were to have a love child. Can you picture it? Writer Spencer Sinclair and director Adam King can – which is how they were able to create, along with producer March Mercanti, the psychological horror film, Guess Who’s Not Coming to Breakfast, Lunch or Dinner?

Set in 1956, this short film about the wholesome Swanson family and their unusual dinner rituals had its world premiere in October at the Fargo Fantastic Film Festival and won the award for Best Film at YoungCuts Film Festival in Montreal in November. It will be presented for the first time in Toronto as an official selection of the indiefilmTO Festival along with nine other local short films on Monday, December 7th at TIFF Bell Lightbox.

I recently interviewed Toronto-based actor, Michelle D’Alessandro Hatt, about her role in the film.

You play Martha Swanson, a fifties housewife with a dark twist. What attracted you to this part?

One of my goals as an actor is to play smart, strong women who aren’t held back by conventions of age or gender, so I loved Martha immediately. I like to think all fifties housewives had a deep, dark secret that they hid from the prying eyes of their neighbours. The social constructs of the period imposed so many restrictions on women, so they had to have some kind of outlet for expressing themselves — it just so happens that Martha’s is quite extreme (which made playing her so much fun).

How did you prepare for such a character with such drastically different sides to her personality?

Prior to my audition, in addition to reading and analyzing Spencer Sinclair’s script, I researched both the genre and the past work of the director, Adam King. So on one hand I understood the horror elements of the story and was familiar with the very specific Barbara Billingsly type style the piece warranted, but I also knew that Adam would be infusing the film with his own brand of darkness. Also, I don’t usually go this far, but I actually dressed in a fancy dress, make-up and heels for my audition so that I could really embody the hemmed in, physical limitations of a fifties housewife. That made it even more delicious to then explore Martha’s counterpoint to being America’s favourite mom next door – her insatiable, sinister side.