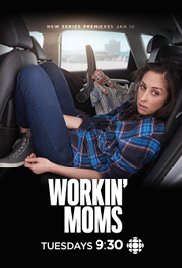 I remember being a young boy and coming home from school. My mom was always there to greet me and ask how my day at school had been. Unfortunately, these days most households do not have the option to allow the mom to stay home for the sake of the children. These days, moms are working as soon as their children are old enough for daycare. It’s unfortunate but also necessary to be able to provide that extra income for cost of living, for food on the table, for providing daily necessities for your children and keeping the rent/mortgage paid.

A new CBC series, Workin’ Moms sheds light on what it’s like for moms to have to return to work after bearing children. It was created by actress and working mom, Catherine Reitman. She is the show runner, producer and star of Workin’ Moms. I was extremely fortunate to reach her through her publicist. She was in Toronto, busy working in the writing room the day she called me. I did my best to get all of the juicy details of the series, as well as finding out how it came to be green lit.

“I honestly don’t watch a lot of TV but thoroughly enjoyed a marathon of Working Moms. It’s a very different style from CBC’s mostly conservative programming. What had inspired the idea for the show and what did it take to convince CBC your show deserved a shot?”

“I am a mom and had returned to work to quickly after bearing a child. It was painful and very difficult. I tend to process pain through laughter. I started writing down my experiences as a working mom. My husband and I then asked favors from our friends to help shoot an eight minute sizzle reel. Sally Catto of CBC green-lit the show based off of the short reel. It was a representation of what we’d be shooting if we had the luxury of having a show.”

Catherine has been no stranger to television before the success of Workin’ Moms. She may be better known for her roles in ABC’s hit show Blackish and It’s Always Sunny In Philadelphia. She was a member of the Groundlings Improv Theatres, the Sunday Company in Los Angeles. She’s also had roles in How I Met Your Mother, Real Wedding Crashers, I Love You Man and Knocked Up. Her talent and ambition mixed in with persistence and tenacity has clearly led her to this moment in her career.

Catherine’s husband, Philip Sternberg is an executive on the series and also plays her onscreen husband. I’d asked her how he became involved. The reasons seemed to be pretty simple. Philip didn’t want other men making out with his wife. Obviously they have an amazing marriage and I can assume that as long as he’s on the show, life at home is paradise.

“I was so surprised and delighted to see Dan Aykroyd on the show as your dad. How did he become involved?”

“Dan has been a long time friend of the family’s. I wrote him into the script. He read it, liked it and agreed to be in it. Dan has always been a big supporter of Canadian content and we felt privileged and honored to have him involved.”

I had asked if we’d be seeing more of Dan Aykroyd but she unfortunately couldn’t confirm nor deny. That’s as good as a yes for me, so I’m going to keep watching. Most of the audience of the series is women, however, every man in a relationship with a working mom has heard the same stories and experiences portrayed in the episodes.

“The show is very honest and come from personal experiences. I will sit with the other writers in the room and we’ll discuss different aspects and challenges, both funny and tragic of being a working mom. I’ll walk through every beat of every episode before assigning the scripts to the writers.”

It takes four days to create each episode. There are thirteen episodes per season and it’s looking really promising for a second year of new episodes. The writing team is all female and because they were the best candidates for the job when Catherine was putting together the writing team.

Having watched a string of episodes as a man that had been in a relationship with a working mom for some thirty years, I found it very engaging and familiar. The humor in each episode is a direct result of Catherine’s ability to take a negative or tragic experience of a working mom and put a funny spin on it. Rather than hush it up and hide from an embarrassing moment, she’s showing the human side of reality that doesn’t always go as planned.

The actors in the TV series seem to be born to play their role. Hats off to the casting directors for nailing it. The storylines are unique and playful with a twist of tears. Those tears are inspired by the joy and pain of being a working mom.
I am thrilled to see CBC’s format changing to allow shows like this to entertain us. Workin’ Moms showcases the talent of Canadian writers and stories. It’s refreshing and funny as it celebrates motherhood and the reality of working moms. It’s about time.