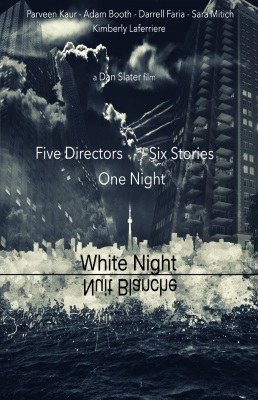 One night a year an art festival comes to town called Nuit Blanche. Exhibits are located throughout the city and the night is possessed by art. This magical event happens in Toronto and one film company plans to harness that creative energy for their feature film White Night.

Multiname Productions is owned and operated by Dan Slater (director/writer), Matt Purdy (director/writer) and Adam Booth (producer/actor). Established back in 2013, I was able to reach Dan and Adam for an exclusive on their current project White Night.

I was told the idea of this film was hatched by a previous attending of Nuit Blanche. This film will rely on five directors to tell five stories which intersect in the third act of the film. One of the lead actresses is French, so a French speaking director was brought in. “We are very fortunate to have such great talent attached to this film.” From hand picked directors to recognized industry actors, this is promising to be a multifaceted, multitalented and ground-breaking production.

The film is their first feature, a story about a handful of individuals attending the festival. Throughout the night, it is revealed that appearances can be deceiving and that art is perceived very differently for everyone.

Having launched a successful crowdfunding campaign on Indiegogo, Multiname has introduced a novel idea of enticing donations. An art exhibit, “Me As I See It In Boxes” will serve as an interactive piece. Contributors are encouraged to draw on the boxes.