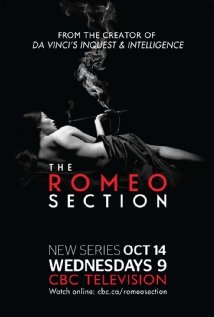 The Romeo Section has arrived. It is CBC’s latest addition to Wednesday night entertainment.

It is also the latest creation from veteran TV writer and director Chris Haddock. His past contributions include Da Vinci’s Inquest and Intelligence. Vancouver has been home to all three.

He was busy taping the last episode when he accepted an invitation from our magazine to ask for some insight into the show. Upon arriving at the show’s location I was treated like a guest. The show’s publicist, Grace Park, was instrumental in facilitating our meeting. Chris Haddock was very courteous as he sat down with me for a Q & A.

Darren: This show has a different flavor in its content. Was that a difficult proposition for CBC?

Chris Haddock: Not at all. I wanted to create a show that felt authentic and fresh. I had approached CBC with the idea of a cable style show that allowed nudity and colorful language. We had discussions about what was allowable without censorship.*

Darren: Will it be seen on other networks?

Chris Haddock: Presently we have an international distributor, Red Arrow International, and we will be approaching the U.S. for interest.

Darren: Do you have a team of writers on the show?

Chris Haddock: We do. I’ve been co-writing with them. I drafted five episodes before production began.

* If you have kids, you may want to tuck them into bed before watching. It has the components of sex, drugs and homicide — Darren