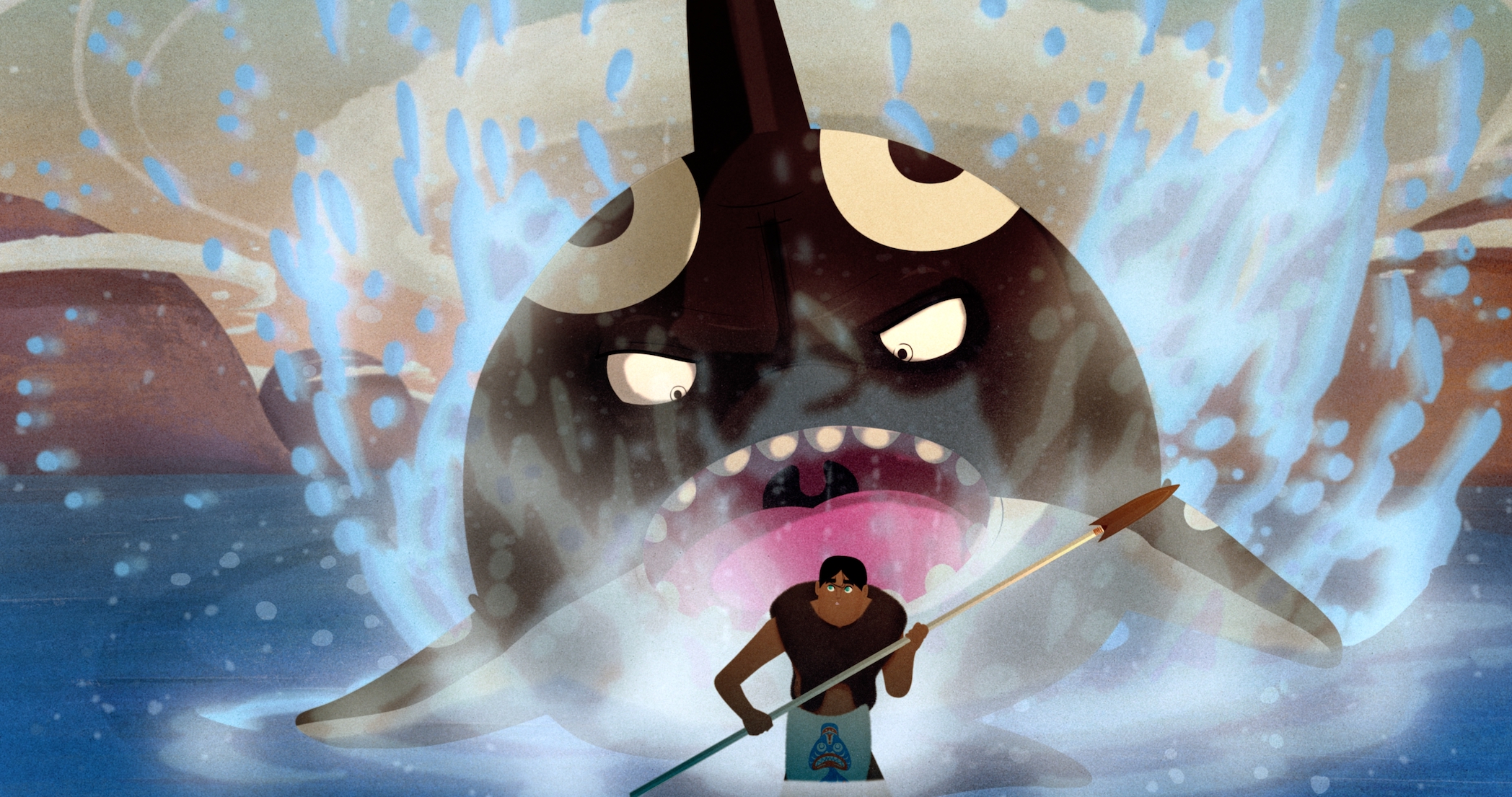 How many of us are familiar with our heritage? Our past can shape our future.  Listening to stories from our parents and grandparents about your family history intertwined with amazing tales of sometimes heroic proportions can add fodder to your character and aspirations. Some of us have heard rich stories that bear repeating to keep our history alive. If you’re an animator those stories can also be shared visually.

Christopher Auchter is an animator with an amazing tale. His family heritage is Haida, an Indigenous People whose island territories lie off the West Coast of Canada and southern regions of Alaska. Today, the archipelago is referred to as Haida Gwaii. It translates to “People’s Island.” He grew up listening to fascinating stories told by his relatives. The legacy of one such story lives on through his animated film, The Mountain Of SGaana.  I was lucky enough to catch up to Christopher in Burnaby to become more familiar with the story and how he put a modern spin on it.

As a young fisherman cruises along a rugged shoreline, a tiny mouse in Haida regalia appears and starts to knit a blanket. A story unfolds on the blanket as it grows longer, illustrating the ancient tale of Haida master sea hunter Naa-Naa-Simgat and his beloved, Kuuga Kuns. When a SGaana (the Haida word for “killer whale”) captures the hunter and drags him down into a supernatural world, the courageous Kuuga Kuns sets off to save him. Will the lovers manage to escape the undersea Mountain of SGaana, or will they, too, become part of the Haida spirit world forever?

I’ve also had the privilege of viewing the animation and the images are captivating. A brilliant tale that is rich in heritage with the addition of a warning for young people to pay attention to their surroundings. The story is accompanied with music and singing that forms a perfect marriage that is engaging till the end. The story unravels through the characters actions rather than dialogue. In doing so, The Mountain Of SGaana can be understood internationally without having to translate with captioning throughout it, allowing your eyes and ears to better appreciate and the tale to permeate all your senses.

“How did the animation evolve and where did the inspiration originate?”

“When I was a boy I would travel with my grandfather, a commercial fisherman. We would fish in locations very few have been. During that time he and his friends would share tales from their fishing expeditions. Those tales were a big influence on my story. Through animation I’m able to use it as a metaphor to remind us to remember our history and heritage. When I first approached the NFB with the idea, I had sent them an illustration of a killer whale bursting through the water and launching toward Naa-Naa-Simgat, the sea hunter. They immediately knew where I wanted to portray in the story and agreed to help me produce it. I was guided from start to finish, provided equipment as well as working alongside three additional talented animators. I collaborated on the script with Annie Reid.”

The additional animators were Tara Barker, Marco Li and Sitji Chou. The amazing VFX artist was Russel Heyman. The colourful film is ten minutes long with artful illustrations that dazzle and engage. The tantalizing music is composed by Daniel Janke. Producers Shirley Vercruysse and Teri Snelgrove of NFB’s BC & Yukon Studio made the film possible by believing in Christopher’s filmmaking talent. Without the direction and support from both parties, the production wouldn’t have been possible. He also gives credit to his wife Celia and two boys Maddex and Logan for their support. A humble artist in his own right.

“When did you know you wanted to be an animator?”

“I drew as a young boy and was always encouraged by my grandfather and  uncle, renowned artist, Michael Nicoll Yahgulanaas. My parents supported my efforts and after graduating from high school I enrolled into Emily Carr University for Art and Design. I enrolled in 1998 and finished in 2002. At that time animation had been transitioning from hand drawn to digital animation. I had focused my studies on hand drawn animation. It turned out to be a blessing because one of my first jobs for the NFB was doing charcoal animation, based on a native legend, Tlingit. ”

In addition to animation, Christopher Auchter has produced three children’s books, a comic book and a graphic novel on the war of 1812. Since Emily Carr, he’s been exploring what type of storyteller he wants to be. It’s not always easy finding a fit in the already crowded world of animation but he has filled a void that had been seemingly awaiting his arrival. I’ve not seen anything comparable to this unique film. It encompasses mystical storytelling enveloped in a colourful array of Haida designs and graphics I’d only seen in galleries.

His uncle, Michael Nicoll Yahgulanaas  had created a graphic novel on Haida culture. The pages inside can be taken out in sequential order and placed into a large pattern to form a mural with a Haida design and graphics.  The stories inside are the same ones he told Christopher and his brother while on long drives in the car when he they were younger. I think it’s safe to say that illustrating has merged into his life at a very young age and never left.

“How instrumental was the NFB in seeing the production come to fruition?”

“They were amazing. They made sure I had all the equipment necessary for the project, while orchestrating actors and other skilled professionals to collaborate with. They originally wanted a five minute film but after negotiations and the risk of an incomplete story it was agreed that it could be extended to ten. Throughout the 1 ½ years of production I was provided with a large Cintiq (digital monitor) in which I utilized for drawing directly onto. Various programs make it capable of producing a multitude of textures. The NFB pulled out all the stops to make me feel comfortable. They were very invested in seeing the project through to the end.”

Christopher had actors come into a recording studio to capture gestures for the characters that help bring them to life. His sister, Nikita Toya Auchter sings the three Haida songs in the film. The songs help the girl in the story sing her way out of trouble.  One of the songs represents an incident in which one of his relatives had found a shark long ago stranded on shore in low tide. They helped the shark back into the water and as it swam away it sang to them. That is where the song originated. The shark became one of five family crests and is represented in the film on an apron worn by one of the characters in the animation.  He had asked his sister on a Friday to learn the songs by Monday. She pulled it off brilliantly. She is an aspiring actress with a soothing and spirited voice. There are so many details entwined in this film. I was thoroughly impressed to learn that it was his first soiree into an animated production of this scale.

The film has been entered into 9 festivals including Montreal, Ottawa, Seoul, Warsaw, and The Czech Republic to name a few. Christopher was fortunate enough to attend the film festival in The Czech Republic accompanied with his family. He says the city comes alive during the festival. He and his young family went onto Prague and Vienna afterward for holiday. The Mountain Of SGaana will also be screening at VIFF at Tinseltown on West Pender Oct.5 and the 12th. Each screening will be followed by a Q&A.  Christopher jokes as he compares his invite list for the screenings to a wedding list. He’s making a guest list and sending out invitations to friends and family. Sure to be thoroughly impressed and complimenting. Certainly, exciting times for a young animator.

The music’s composer, Daniel Janke was also the director on the charcoal animation Christopher had worked with years previously at NFB.

“He was a great welcome to the team. He had great advice and suggestions throughout the production. It was great to be working with him again. I had sent him a song list for ideas. In return Daniel would send me songs he’d created. They all sounded rooted with a strong sense of history. No an electric kaleidoscope of sound. They were a great addition.”

The animation software they worked with is called Toon Boom. He first started working with the program back in 2007 when it was in its infancy. Today it is considered one of the industry standards. It’s designed for 2D but can also accomodate 3D. Sitji Chou utilized Photoshop to create the desired textures in the Supernatural World and Michael Mann applied After Effects for the composition.

Go see this film at VIFF and help support a local animator be recognized for his incredible contribution to Haida culture and Canadian entertainment.  Great thanks also go to NFB for sponsoring our artists.