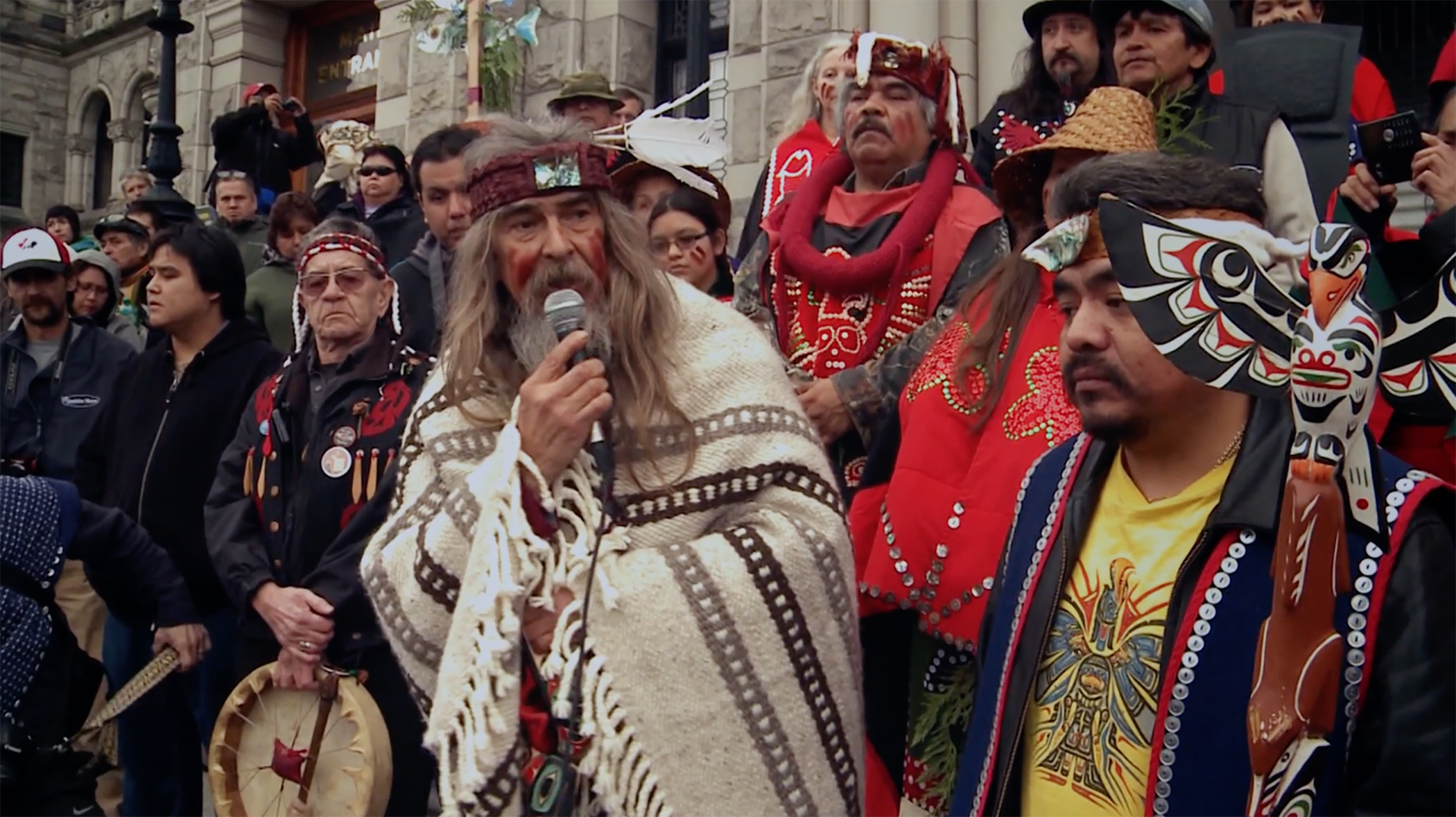 Throughout our lives, somebody will come into it that will leave you with a profound impact. They will have a light inside of them so bright it will ignite passion in anyone standing to close.  As soon as you meet them, you want to tell the world about your greatest discovery. Being immortalized in a documentary that encapsulates the essence of greatness is not easy to do when you are larger than life.  However, La Tiesha Fazakas and Natalie Boll were compelled to try.  They realized once they met artist Beau Dick that they were standing in the shadow of a legend and they needed to introduce him to the world.

Beau Dick is a Canadian art legend and enigmatic carver from Alert Bay, a small remote village on the Northwest Coast of BC. His art has been celebrated around the world as a vibrant expression of the West Coast Indigenous culture that crosses over into the contemporary art world.

This documentary started seven years ago and was always meant to be made.  As an art buyer and agent, La Tiesha Fazakas had known Beau Dick for twenty years through his art. One day a director and producer had walked into her location and said they were making a thriller and wanted to know more about northwest coast mythology and the culture.  She knew they had to meet Beau. He was the best source.

“He’d make these amazing pieces that were titillating frightening with a sense of sublime. They were so exquisite.  They were unnerving. His work spoke more about the Kwakiutl culture. Its much more holistic and doesn’t look at life as good and evil or black and white. It’s a more circular thought and story pattern. I took them up to Alert Bay and it was an amazing experience for them. It was hilarious and another brilliant Beau story. Everybody has one. Everyone that knows Beau has a really great Beau story.  It would be another great idea for a film where everybody tells a Beau story, cause he has so many great ones.”

Through working with the filmmakers is when she had the idea of Beau Dick being a great idea for a documentary.  She’d never made a film before so she began developing a treatment and an idea. She continued for two years until meeting Natalie Boll.  La Tiesha says,  “if you know Beau, things always have a way of working out.”  Natalie is involved in film and was a production manager on a network when they met. She didn’t believe she had the time or energy to get involved in a documentary.  La Tiesha invited Natalie to her home to look at a couple of Beau’s masks and pitch the idea of the documentary. Once Natalie had seen the masks, it immediately moved her.

“It felt like it had a spirit and energy attached to it. It was like whoa. I’d never seen anything like it before. It had a supernatural feel to it.  I was immediately interested in knowing more about Beau Dick.”

They travelled to Alert Bay so Natalie could meet him.  It’s an all day trek to reach Alert Bay.  Two ferries and a lot of driving but an absolutely beautiful place once you do arrive.  They found his carving shop underneath a bed and breakfast. Once she did meet him, he felt so familiar.

“He has an easiness and intriguing essence about him. There was now a burning desire to make this film. Once we began to go to work on the documentary, people became attached to the project almost magically. Like it was meant to happen.”

“How did Beau feel about the idea of the documentary on him?”

La Tiesha answers, “He liked it. He is the most humble and generous man ever and is used to putting others in the spotlight but he also enjoys it.  As much as he liked the idea of the documentary though, he wanted to know when I’d write the book. For him, you’ve really made it in the world if there was a book, cause he could give it to his mom. In comparison to other artists, he transcends the niche of northwest coast. He’s transcended into the contemporary art world. He’s created a path that wasn’t there before.  He was invited to Documenta. It is held in Germany once every 5 years and considered the most important art exhibit in the world. This year they were adding a second exhibition in Athens.”

Unfortunately as preparations began Beau was in the hospital. La Teisha had coordinated all of that for him and then he fell ill. He passed away in March at the age of 61.  La Teisha and his apprentices went to represent on his behalf.  She is very close to the family and feels like part of the community. She also feels like the community has been part of the film.

“Although he was not there in body he was there in spirit, every time some crazy adventure happened they’d look up and say, “thanks Beau.” We definitely felt his presence. He was a practical joker.”

La Tiesha has always considered Beau the Picasso or Van Gogh of Canada. He seemed to be a virtuoso and was larger than life.  Like other well renowned artists, it’s also about the person behind the art and how unique he is. She believes he was born for greatness and the entire path has been a journey that they all got to hop onto and play their part.

Neither La Tiesha nor Natalie have any  camera operating experience but they made a short proof of concept video to go after funding. Unfortunately, nobody was willing to provide the financial backing, so together they built a crew from friends and volunteers. They raised enough private financing to travel with a small crew to Alert Bay to begin taping. Throughout the five years of filming there were multiple DOP’s. It all depended on who was available every time they went back out.  They would travel to Alert Bay about 4 times while filming.  All the time awaiting funding and a director. Once the funding didn’t arrive they became the driving force, as well as producers, production managers, accountants and craft services.

They were conducting interviews, holding the sound boom, acting as editing assistant and logging all the footage. They’d spend 4-5 days at a time in Alert Bay.

It wasn’t until the fourth year of the project that Rendall Perry came on as executive producer and provided the rest of the financing for RED cameras as well as aerial footage. Natalie had worked with him on other projects. They were also able to do more with the sound and music. The funding was all private and it was definitely a passion project.

Beau was more than an artist. He was a leader, an activist, a teacher,  humanitarian and so much more. When he was asked what gets him excited in the world, he thought for a moment, then answered,

Natalie says Beau was such a bridge and conduit to so many people, especially between native and non-native people.  He was so engaging that he created a space for people to engage so that more people would care about the issues that affect us all as well as first nations people and about art and where our place as Canadians is in the art world. It’s incredible how someone who is first nations can be emblematic of us all. He created a real space of inclusion rather than exclusion. She felt that was important and hoped that they did that with the film.

Considering the two ladies never knew each other very well before the film , they worked so well together. That rarely happens. They both share similar passions and compassions for environmental concerns, First Nation concerns and that all fits really well. In making the documentary, Natalie says they were also cognoscente of where their boundaries are as non native people.  Native people need allies. They don’t need people to tell their stories for them. That’s what they tried with this film. They tried to tell the story with Beau. They wanted to be part of a voice rather than the authoritative voice.

The film is told through the aide of Beau and you really do get an amazing impression of this enigma and very special soul.  I wanted to include a few words from Beau taken from the documentary.

“I was inspired by cave drawings of the Neanderthal. I was also inspired by Michelangelo and Leonardo da Vinci.  Artists I don’t know except from what I’ve seen in books or visual inspirations. There’s also something deep inside. The tick, tick, tick.  Some of us are driven and we don’t know why. Something is making us do what we do and we give it all we got. Doesn’t seem like a rhyme or reason but the results are amazing.”

He saw the world as everyone’s responsibility, despite our colour, race or religion.  He says our doctrines teach us to look after family. His family has grown so much, he considered it everybody.

Natalie Boll and La Tiesha Takasha have put their hearts and souls into telling a story that needed to be told. In doing so they’ve helped to carry on his legacy and introduce who Beau Dick was to the rest of the world. Please go see this documentary and get to know Beau. You will feel inspired and will appreciate his contributions to the art world as well as his contributions to protect our environment.

It is playing at VIFF on Sept. 30th and the 11th of October at UBC. His family will be in attendance.