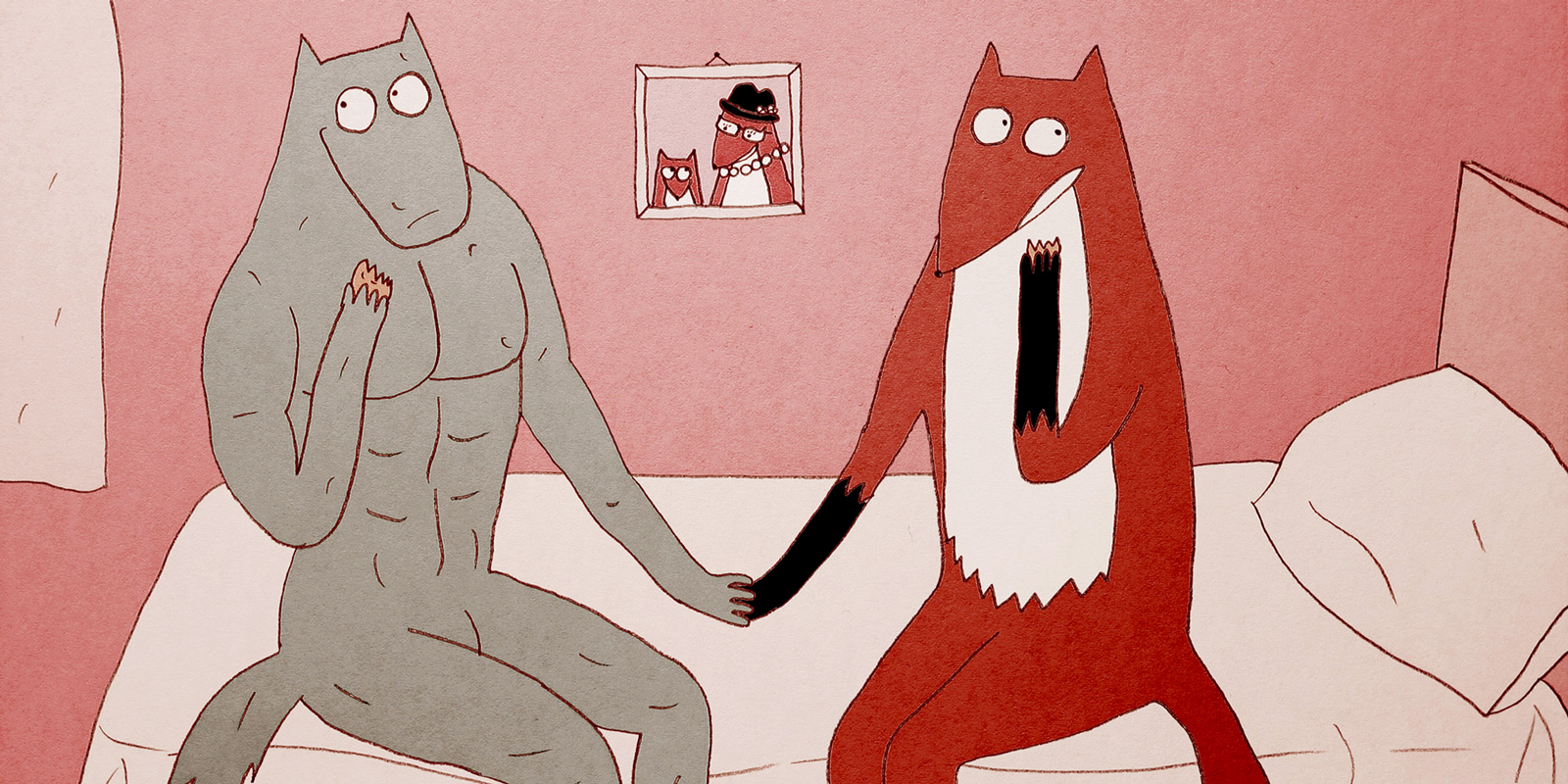 There are many varieties of animations created. Some are made for pure entertainment and some are made to provoke thought and create conversation. Manivald is an animation that attempts to break down barriers while sending a positive message.

The story revolves around a red fox named Manivald and his single vivacious mom. In the story Manivald is portrayed as a young adult with multiple academic achievements still living at home and unemployed. In todays society, this scenario is becoming more common. The film not only mirrors this reality but also takes it one step further. Manivald is also gay and expresses his feelings for a grey wolf that visits their home to repair a washing machine. As it turns out, the wolf is bisexual and has a tryst with both the mom and Manivald on separate occasions.   Although both are satisfied with the attention of the repairman, Manivald’s mom is still frustrated that her adult son is jobless and still living at home.

I spoke with Chintis Lundgren and Draško Ivezić, the creators of Manivald. They live in Croatia but were in a Montreal studio when we discussed animation via skype.

“What was the inspiration for this story?”

Chintis answers, “It came from some of my own experiences as a young adult. I was unemployed and still living at home into my twenties. I remember how scary the thought of getting a job and moving out to support myself was. I didn’t start working until the age of twenty-five. I compare my early life to Pippi Longstocking.”

Chintis and Draško are a couple. They co-wrote the film and both have a background in Fine Arts.  Draško continues to explain the premise of the story.

“When we decided to introduce Manivald as gay, it was for the intention of normalizing his affection for the same sex. In today’s society there are still so many people in the closet. They are still afraid to tell their friends and family about their sexuality. We wanted to send the message that its okay to be gay and it is accepted by society despite their fears of expressing it.”

I applaud their tenacity for taking on the issue of sexuality.  After all, we as a society should have the right to express our affection without the fear of persecution or judgement.

“How did you finance the project?” They both answer.

“Draško is from the Balkins and Jelena Popović, a producer with NFB is also from the Balkins. Jelena happened to be visiting Croatia for a wedding. A chance encounter happened and the opportunity presented itself to pitch the idea to her.  The NFB strives to have a 50/50 ratio of male to female directors, so I decided to take on the role of director. In doing so, we had qualified for funding.  We also received funding from the Estonia Film Fund, the Estonia Cultural Development as well as the Croatia Film Fund.”

They worked on the project for a year but the animation only took 5 months to complete. Once finishing the bulk of the work they travelled to a studio in Montreal for three weeks to apply the final touches.  In order to create the animation, Chintis would draw the images on paper, take a photo then colour it in Photoshop. They had the help of five other animators and as arduous as it sounds, Chintis says it wasn’t as time consuming as most people think. She would draw the background once and then apply different images on top of it.

Draško explains, “We wanted to give it an organic feel.”

They met the music composer, Terence Dunn at another festival. He had won previous awards for his work. They had suggested some ideas for the music and he incorporated them.

They finished the film in March and the first screening was in Croatia in June at an animation festival. Its been submitted to approx. 25 other festivals. Thusfar, the animation has won 3 awards. In Croatia it won best animation. They are anticipating more awards.

The animation is unique in its storytelling and images. I wish them well in the series and I hope it can contribute to a change in society’s view of sexual preference.  The premise comes off naturally and organically, as intended. A great little film.