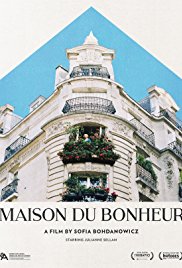 Most of us have crossed paths with someone that is truly fascinating. It’s not about their success or status, its more about their perception and attitude, their grace and ability to be content despite life’s ups and downs.   There is a calm and a curiosity that welcomes you in. You feel like a guest in their presence.  When they speak, it is gold plated.  Inspiring everyone they meet, it makes you realize they have discovered the keys to a happy life and have never left the drivers seat.  They tend to travel in the outside lane of life. Allowing the speeders to rush by while they capture the essence of living.

The film, Maison du Bonheur is about a fascinating woman, Juliane Lumbroso-Sellam living in Paris.  She has incredible tenacity despite losing her husband eight months prior to being the subject of a documentary created by Sofia Bohdanowicz. Worlds apart in age and location, a relationship is formed and a window opened into a life many of us will find unobtainable if we can’t veer out of the passing lane long enough to appreciate our surroundings. That is the lesson I took away from watching this documentary.  I was very fortunate to speak with filmmaker Sofia Bohdanowicz regarding the films conception.

“Juliane is an extremely fascinating woman. How did this project come about?”

“I was having a screening of short films based on my great grandmothers poems. A friend of mine had attended and really enjoyed the films. She commented that she’d never seen a film that captures the domestic spirit like mine did.  She then said if I ever get the opportunity to go to Paris, she’d like me to meet her mom and make a film on her. She told me about her mom and how interesting her life was. The more she told me, the more interested I became.  I had a good feeling about it, so on my 30th birthday I took out a line of credit, purchased some film and travelled to Paris to meet her. The entire project took on a 30 theme. I stayed for 30 days and filmed for 30 days.”

Sofia tells me that they hadn’t talked on the phone nor exchanged emails before travelling to Paris.  It was a huge risk but Sofia knew she’d have a film before returning to Canada.  She tells me, “When you’re open to working with the variables you have in front of you and don’t have a list of expectations, you can let the situation guide you and you can make it interesting no matter what the situation is.”

“Did you have anyone help you with the camera or sound?”

“I didn’t bring anyone with me to keep the expense down. It also made the experience much more intimate. It allowed Juliane to choose what to talk about and share. That was my intention. I’d ask her what she’d be doing that day and if there would be anything integral for the film.  I’d sensed early on that she didn’t want to talk directly about the memory of her late husband, but more indirectly through her life’s traditions and pillars. I wanted to make her feel like it was a safe space for her to be herself. A lot of times when you bring a camera into a home, peoples behavior changes. I was very careful and very conscious of what I’d ask her to share with me. They are vulnerable once the camera is rolling. Juliane was very generous in what she was willing to share. When someone gives you a gift like that it’s important to be very careful with it.”

There are many interesting stories that unfold throughout this charming film.  She talks about a restaurant she visits frequently that is now owned by the dishwasher because the owner went bankrupt. She discusses her apartment and why she’s stayed for 50 years. She’s had the same hairdresser for 30 years and the importance of baking fresh Shabbat bread to give to friends. She visits her sister that makes her own wine while pointing out the importance of great cheese to accompany it.  I wanted to schedule my next trip to Paris to experience the same slice of bliss.

“Was it difficult being a one man crew?”

“I’m a bit of a control freak. I write my own projects and prefer to film them so I know what its going to look like.  I also like to edit it myself. I enjoy all of it. There’s something empowering about learning to use the camera, learning to expose the film and how to roll sound. Since it was just me filming her, it was kept much more intimate. It wouldn’t have been the same film with a bigger crew.”

Throughout the documentary, we learn about her amorous relationship with her late husband and how they met. He introduced her to astrology and how to read the stars and planets that shape a persons life. She gives Sofia a reading that opens a window into her personality and characteristics that exist for reasons outside her control. As it seems, they have more to do with how the planets were aligned within our universe the day she was born.

Sofia says it was such a great trade of skills.  After Sofia had finished the film, Juliane had travelled to HotDocs to screen it.  She was so pleased how Sofia was able to capture her essence and felt it was an accurate portrait and commented on how much it resonated with her. It was a great trade in that regard.  In being adventurous and opening her home to Sofia shortly after her husbands passing, Sofia felt it had helped with her healing process.

“It was amazing to make a film that felt like we were both supporting each other. I felt very lucky for going down there.”

“I’ve heard Paris French is different from Quebec French. Were there any language issues?”

“I grew up in a French speaking part of Ontario. Both my parents were French teachers. When I was in high school I went to France as an exchange student for three months.  I also travelled to France a few times later as an adult so my French accent is all over the place. It’s Anglophone, Francophone Ontarian and a little Parisian. There are a few words that translate differently but there wasn’t really any language issues.”

Sofia had shot the film in the summer of 2015 and although it was a risk to make, she’d been down this road before. She’d travelled to Iceland having made an agreement with a friend to help him make a music video in exchange for his help to make a film inspired by a poem her great grandmother wrote.  It turned out to be a disaster and the film about the poem never got made but she salvaged the footage and made the film about the failure of trying to make the production. The film still got made because failure is also interesting. If she would’ve gotten to Paris and Juliane didn’t feel like talking the whole time, she said she would’ve adjusted the subject of the film to trying to get a conversation out of Juliane. She attributes her filmmaking to letting the situation guide the film.

“Why did you choose to shoot it on film?”

“I find it changes my train of thought. It makes me more present and aware of the frame because it’s more permanent.  You either get it or you don’t. It’s also expensive, so it makes footage more limited to work with. It forces you to draw a path to your story, where digital can capture much more, making it more difficult to narrow down. With film, you are editing as you go. I had trouble with syncing the sound up due to the way the Bolex captured the frames. I had to recreate a lot of the sounds through foley, including the making of the Shabbat bread. I had contacted Juliane for the recipe. I also shoot with digital, but it just felt right to use film on this project.”

She had a collaborator partner, Calvin Thomas that producers all of her films.

They have a great working relationship and he helped with a lot of the cuts and suggestions. She also has a group of filmmaker friends she showed the rough cut too that helped with input. The subtitles were a little complicated considering many of her friends don’t speak French. Some of the sound was left in for cinematic reasons and to express the personal/intimate relationship between her and Juliane. Considering she hasn’t had house guests before they’re personalities jived so well.

Life passes you by if you get to complacent. Juilane Sellam has found a way to keep it fresh and exciting. Sofia believes her veracity comes from her coping mechanisms. It’s her necessary routines that cause her to continue living life in the form of maintaining her flowers, getting her hair and nails done, baking and making new memories along the way. She never wavers her purpose or reason for life. She stays in her own lane where she can enjoy the view and control the speed.

The film had its world premiere in Buenos Aires, Argentina at the Film Festival of Independent Cinema.  It also screened at HotDocs in the spring in Toronto.  After screening at VIFF it’ll be travelling to a festival in Iceland and then another festival in Montreal. The film has been well received. When Juliane travelled to HotDocs in Toronto, it gave her tremendous validation for the effort she put into it. She loved it and laughed throughout the viewing of it.

Sofia Bohdanowicz is planning on a docufiction as her next production. It will be based on love letters and poems she found in a box in her great grandmothers home. In them she is corresponding to another poet in New York City.