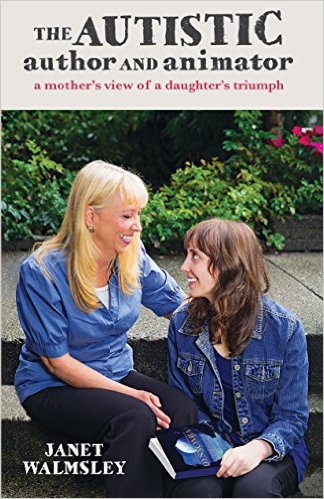 Janet Walmsley and Jenny Story are both first time authors and mother and daughter.  If that doesn’t sound unique, Jenny lives with autism while working as a successful animator.

Another amazing revelation, Janet started writing a book on Jenny’s journey with autism. Only partly through her book and with a deadline to meet, she was diagnosed with breast cancer. Devastating and life changing to most of us… but you don’t know Janet. She had a double mastectomy, followed by reconstructive surgery. She then finished her book before the deadline.

The words amazing, tenacity and perseverance consumed me after interviewing these two brilliant women.

When Jenny was diagnosed with autism at the age of three, the doctors tried to label Jenny as a child that would be robbed of a quality life. They never considered the power and encouragement of her mom Janet.

Janet Walmsley wants the public to know that life can be so much more than what’s expected of an autistic person.

As first time authors, understanding how it all began is a journey worth buying a ticket for.
When Jenny was in grade nine, she was in her room studying for finals. She turned her TV on but eventually fell asleep. When she awoke, she remembered a movie trailer with a speeding jeep and some outcast characters. She asks her mom if she knew the name of the movie. Her mom replied that she hadn’t seen it. It was later realized that it had all been a dream.

When Jenny started grade ten, she was enrolled in a creative writing class. She wrote the story that she had remembered in her dream. The teacher and students enjoy her story so much that they encourage her to publish it.

In the next couple of years, the family move from Vernon to Vancouver so Jenny can pursue a career in animation. She graduates with a certificate and begins work as an animator.

A short time later, Janet runs into an old friend. She invites Janet and Jenny to a publishing event. They meet with Influence Publishing to discuss Jenny’s book. Janet mentions her intentions of also writing a book on Jenny’s extraordinary journey. They are both invited to a weekend workshop and Influence Publishing agrees to publish both books.

With Jenny’s book in pre order, Barnes And Noble request 450 of them. Amazing for a first time publisher.

A screenwriter and friend of Janet works with Brightland Productions. He is very interested in adapting Janet’s book into a screenplay. Her book, The Autistic Author And Animator, has become a huge success. It has allowed teachers and parents a much better understanding and appreciation for people affected with autism. Her book has been purchased by many schools and parents caring for autistic children.

Jenny’s book, Dysnomia, is a fantasy story about a girl that sets out to prove she can do anything a boy can. Along the way, her and her friends face danger, adventure and mysterious forces. It has become a best seller.

Since moving to Vancouver five years ago, they have not slowed down. Janet continues to market both books and the two extraordinary women have been to countless book signings, TV shows, radio, podcasts, newspaper and webisodes.

A mother’s love knows no bounds. Janet reminds me of the label the doctors had put on Jenny when first diagnosed. She follows that memory up with a happier one. Jenny’s high school resource teacher saying “the best is yet to come!”

If you’d like to meet and purchase a book from these two women, they will be at Indigo Book store on 810 Granville St. July 23rd from 1 – 10 pm and another Indigo at W. Broadway and Granville from 5 – 9 pm on Aug. 13th. You can also find both books on Amazon, Barnes and Noble, Blackbond Books, Book Warehouse, Red Toque and Ingram Books.