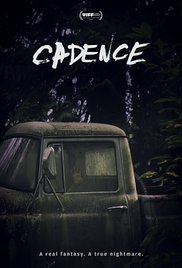 Remember when you were a teenager and you could get away with anything living in the country? Or maybe you felt that freedom while visiting your relatives farm? That is the backdrop for the new psychological thriller, Cadence.

This film is one thrill ride after another. The action never stops and the twists keep coming. Like a well-spun tale, it draws you in, then hooks you. Having a front row seat while ducking branches will leave you with the feeling you were witness to a crime at the amusement park. You wanna tell others about it.

Writer/director Alex Lasheras accepted my invitation to talk about this brilliantly made film. I was eager to find out about the roots of it and how it was planted, cultivated, then harvested. The film is produced by Nicolas Ayerbe Barona. They both met while attending film school at VFS. Arun Fryer is the other producer.

Alex had won a scholarship to attend VFS for a film he made back in high school. He had previously attended film studies at UBC before enrolling at VFS to fulfill his appetite for filmmaking. His passion for making films has been a great addition to urban myth storytelling.

Considering this is writer/director Alex Lasheras’s first feature film, he is a natural. In addition to this film, he’s written and directed many short films. The flow of this film is seamless despite a bit of trivia Alex had let me in on. This particular production was based off of a twenty minute film made by Alex in 2013. They used it to help crowd-fund for the production of the feature.

Another factoid, the original 20 minute film is spliced into the larger film twenty minutes in.

“We used a different RED camera for each film. A RED Epic with Leica lenses for the original twenty. We used a RED Scarlett with Zeiss Super Speed lenses to finish the full length. I had an amazing colorist that worked very hard to blend it all together and match it up. We’re so happy with the way it turned out.”

The premise of this thriller is about a young girl that’s terrorized on her family farm when her pop-star boyfriends friends show up and spoil their solitude.

I head Spielberg say something a long time ago, “Write what you know.” As it turns out, Alex grew up on that farm and his parents still own it. The variety of vegetation on the acreage truly lends itself to multiple backdrops for multiple scenes. There is a scene in the story where the actress and her pop-star boyfriend hide out in an old pick-up truck. That truck is not just a prop, it’s also been in the family since Alex was a young boy.

Alex tells me this is a quote from film genius Kevin Smith. He’s never forgotten it.

“All of the cast seem like they were born to play these roles. How did you get so lucky and where did you find them?”

Alex had seen a performance of hers a couple years previous to the films production. It left an impact and after some later investigation, he tracked her down for an audition.

The younger version of Cadence is played by a youthful Kaitlyn Bernard. Alex had discovered the young talent and later formed a close relationship with her family. Her portrayal mimics one of a veteran.

The actor Charlie Kerr performed the role of pop-star Taylor Lake. Coincidentally enough, Charlie performs in a band when he isn’t acting.

David Kaye plays KC, the antagonist in the film. Alex had watched him in a previous production and knew he had his instigator. Tony Giroux plays his convincing sidekick instigator and Cadence’s mother is played by Amanda Burke. She was absolutely stellar in the film and carried some of the scenes like only a veteran actress can.

Interesting enough, Alex wrote the script with the three main characters in mind. Production lasted fifteen days and finished in September of 2014. Alex took approx. two  years to finish editing and had the great fortune of using music composer Mark Dolmont. He had created the original score for the earlier version of the film. Alex explains that is was a no brainer to have him continue the work on the larger film. Two most important qualities to a great film are the sound and the visual. I can attest to the brilliance of the music and sounds created. It helps tremendously to transition from one scene to the next, accelerate the action or set the tone of a big scene. It screams suspense when its around the corner or sneaking up behind you. The music acts like a guide on an extreme hiking trail.

Cadence has premiered at VIFF to a sold out crowd at the Rio theatre. There was a second screening at International Village. The films success won them a third screening at VanCity Theater on Oct. 19th. Winning the Must See BC category was possible by the audience voting for the most anticipated film. Although I had viewed a screener at my home, I took the opportunity to attend that third screening at VanCity to watch it as it was made to be seen. The quality is spot on. The cast were in attendance with Alex and Nicolas for a Q & A.

I was blown away with what Alex was able to create for a budget under 100,000. The film crew were primarily students from UBC and VFS.

Another step taken for better audience appeal was holding a test screening to work out any dings. Every audience member had a form to fill out anonymously with honest feedback about what worked and what didn’t. Alex told me he considered all of the comments and made appropriate changes before the festival submissions.

It’s been sent to approx. twenty-five festivals in hopes of attracting a distributor.

I am confident that one will step up once seeing the value in Cadence, opening the pathways necessary to reach its intended audience.