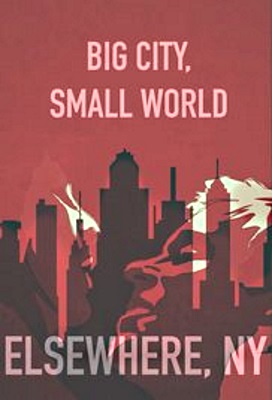 I recently had an interview with Jeffrey P. Nesker, the director of Elsewhere, NY(written by Tom Wilton). This film was shot in NYC and in true dramatic guerilla style — partly because of budget constraints, partly because Jeffrey wanted it to look authentically realistic and partly for the creative control it offered.

The film is shot as a docudrama with locations in Manhattan, Brooklyn and Queens. The story centers around a love triangle between a female named Jennifer and two men, Ethan and Todd. Jennifer, played by actress Gillian Visco, is guided by her friend Christine, played by actress Fiona Graham.

The premise of the love story unfolds when Jennifer meets a bartender named Todd, played by Andrew Ruth. They have a one night stand before going their separate ways. Ironically, they are reunited two years later when Jennifer’s boyfriend Ethan, played by Andrew Leland Rogers, introduces her to his new roommate . . . Todd.

This story has great bones and kept my suspense on high alert. I was fascinated to learn that Jeffrey P. Nesker produced it for under a thousand dollars. He also edited the 90-plus minutes outside from his home in Toronto, not only because his editing suite was at another location, but when he returned from NY in Dec., he discovered his home had been flooded due to a burst water pipe. Oh the woes of Canadian winters.

The docudrama premiered at the 2014 Whistler Film Festival.