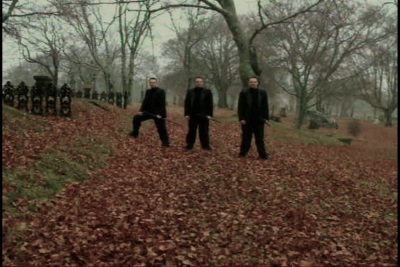 When Lyle Goodwin finished his first feature eight years from the beginning, he felt he’d just climbed a mountain. The journey, the struggles, the persistence to keep pushing on and the gumption to never quit with people counting on you.

It all began way back at the heart of a cable studio in Yarmouth, N.S. where Lyle volunteered to work in exchange for television experience. He also found a crew that supported his vision, his tenacity and his film idea.

Without the loyalty and commitment of the crew, he couldn’t have made his feature, Burn In Hell – South Of Heaven. Lyle continued to work a full time job as he saved for more production time.

The crew doubled as actors and the original music was provided in exchange for a role in the movie. It was a win-win, says Lyle. As a matter of fact, every time one of the crew had a suggestion, he’d listen to determine if it had merit. If it did, changes were made.

Manikins were introduced and teaching himself how to use CGI on AE was invaluable. SOH was originally made to showcase Lyle’s acting talents but later evolved into a marketable product.