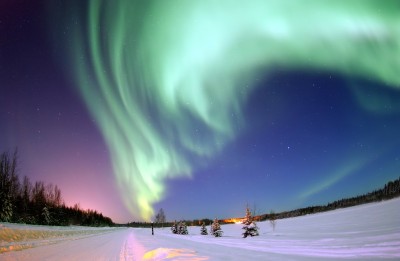 A father daughter story that tugs at the heart strings till the very end. That was my impression of Borealis. I caught up with director Sean Garrity and lead actor and writer Jonas Chernick at a restaurant in Calgary. They had just finished screening the film at the Calgary International Film Festival. They gave me the inside scoop on how it all came about.

Sean told me Borealis was originally a short film he made called Blind.  After watching it, actor Jonas Chernick was moved by the ending and approached Sean with the idea of writing it into a feature. Sean gladly agreed and the script was created. Incidentally, Jonas and Sean have worked and collaborated together on five features in 15 years. Jonas writes and acts, while Sean directs.

Jonas Chernick hunted down the necessary financing to produce the film. The budget was two million and production took five weeks to shoot. Filming began last Fall and approx. 100 – 150 people worked on it.

Joey King was brought in from the U.S. to play Jonas’s daughter. Joey is best known for her roles in Crazy Stupid Love, The Conjuring and White House Down. Emily Hansher(My Awkward Sexual Adventure) plays Jonas’s girlfriend.

Director Sean Garrity wanted it in wide screen format, so he used an Arri ALEXA camera with an anamorphic lens.  He also chose to shoot in the Fall for color palette purposes.

The film will be distributed by Raven Banner out of Toronto.