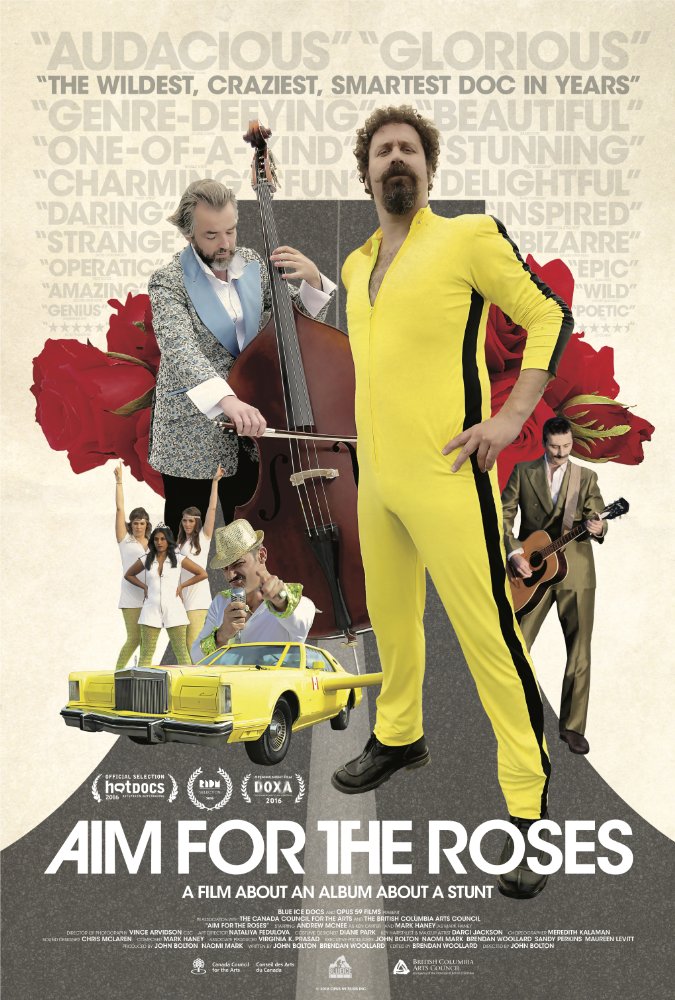 I will be the first to admit, that I have not seen many musicals in my lifetime. Grease was my first and I think the last. After all, everyone has their preference.

Having watched the Mockumentary, Aim For The Roses may have shown me what I was missing.

The film follows the career of the Canadian stunt daredevil driver, Ken Carter. A bigger than life character that had built a reputation for jumping his car over buses and other multiple vehicles that eventually land him in the record books. After a twenty year career he attempts his biggest stunt, jumping the St. Lawrence river in his jet powered Lincoln. The jet rocket failed and thrust Kens car over the ramp into a somersault, causing it to land in the water on its roof and crushing the roll cage. Ken died trying to achieve the impossible stunt. Nobody else has attempted it since.

To describe this film as just another mockumentary would be an injustice. It is so much more and is inspired by a classical musical album. To fully understand and appreciate the film, you have to appreciate the album also.

The album was created by Mark Haney in 2010. It took two and a half years to make and was inspired by Ken Carters life as a daredevil stunt driver. When Mark created the album, his main instrument was the double bass. Some pieces were accompanied by an acoustic guitar, played by Dave Gannett. I was lucky enough to talk to Mark about the making of the album and was thoroughly impressed with the tremendous effort and patience attributed to it.

When Mark Haney was determining what his next project might be he had stumbled across an old VHS tape of a documentary on Ken Carter entitled The Devil At Your Heels. Mark found his character a little heartbreaking. He felt like the Ken Carter in the documentary knew deep down that his last stunt was unachievable but wanted to be a legend like the popular Evil Knieval. Creating an album to represent a unique human being while using numbers in relation to music was Marks ambitious goal.

Mark used equations and relations of numbers to music to recreate scenes from the last stunt into music. To be honest, I’m still trying to figure this one out. The biggest message behind this music is that it’s unique and follows a script.

John Bolton is the writer and director behind the film Aim For The Roses. He had been working with Mark on a separate project when Mark had invited him to the planetarium for the launch of his new album. John really enjoyed it and had been looking for a longer piece for a new musical film. John has made shorter films based on shooter pieces of music. After hearing the story behind the making of Marks album, he knew there was great potential. He decided to make the musical on the creation of the album.

In order to appreciate the music, you had to know who Ken Carter was. He headed to the Ken Carter Preservation Society in Morrisburg, Ontario. The caretakers were instrumental in providing John with archival footage, interviews, documentary footage from The Devil At Your Heels. John and his editor Brendan Woollard spent a year and a half cutting and piecing multiple types of footage. As long as it helped to tell the story and explore the themes in the film and music they used it. John was so grateful for Brendan’s help he gave him a writing credit.

Finding an actor to pull off a bigger than life character fell on the hands of actor Andrew McNee. Andrew comes from a theatrical background and has worked on projects with Mark Haney in the past. His performance was exceptional. The way that he was able to channel the spirit of Ken Carter and draw out the absurdity and pathos is truly remarkable and a credit to his skill as an actor.

“This is a very human story. It’s about ambition and failure. Anyone that’s ever wanted to achieve something can relate to the Ken Carter story.”

John tells me the music has always been the foundation of this film. Having someone adapt your album into a film really takes trust. Although Mark consulted on the film, John was grateful for the permission. John considers Marks album an overlooked masterpiece. He wanted to demystify the making of it and bring it to a larger audience. There are multiple musical themes in the film such as the three bars played multiple times at the beginning of the film known as the Ken Carter bars of music. There is the Saturday, Saturday, Saturday theme. There is also the Requiem Daredevil theme and themes for most of the characters.

One of the best ideas John had in making his film was recreating the ramp. He built it in a way that it could also be utilized as a stage for the musical performances.

It was built on a private property on the banks of the Fraser River in Mission BC.

There is also a reoccurring scene in a lounge in which Adrian Mack from the Georgia Straight is interviewed about the album because of his appreciation for classical music. The scene serves as another dimension to the film. It was John’s intention of creating a world within a world. The character Ken Carter is made to feel like he is somewhat trapped in purgatory through the music. There is also the world of John trapping Mark inside a bar having to explain his music. With multiple dimensions within the film, you have a complete understanding of how the music and the story rely on each other to fully be appreciated. The film is a culmination of all the past films John has made.

John had hoped this film would reach a bigger audience than musical buffs and fast car enthusiasts. There are enough themes in this film to satisfy most people.

Producing this film took five years. Financing it was an uphill struggle because of the type of film it was. BC Arts came on board but they were still short. Finally John pitched it to a friend of his at the Superchannel that was a commissioning editor. She helped with the development and eventually a broadcast license which in turn provided the opportunity for tax credits and the rest of the funding necessary to make the film. Certainly not an easy task but John’s tenacity definitely paid off. Once the budget had been stretched to the limit, Canada Council came on board for finishing costs.

The Mockumentary has screened at Hot Docs and Doc Site. In Vancouver at the Play House and RIDM festival in Montreal. The responses to the film have been very positive and encouraging.

“When making a documentary, you are inspired by the subject. You feel accountable to them to finish the film for them. Your documentary is only as good as your subjects.

There are similarities between filmmakers, musicians and Ken Carter. We’re all reaching for immortality. Something that will outlast ourselves. It’s also a cautionary tale of risking it all and never knowing it will all work out.

Their Canadian distributor is Blue Ice Docs and their International sales agent is Monoduo Films in Germany.

It screened at Vancity this past weekend and I’m sure it was a sold out crowd.