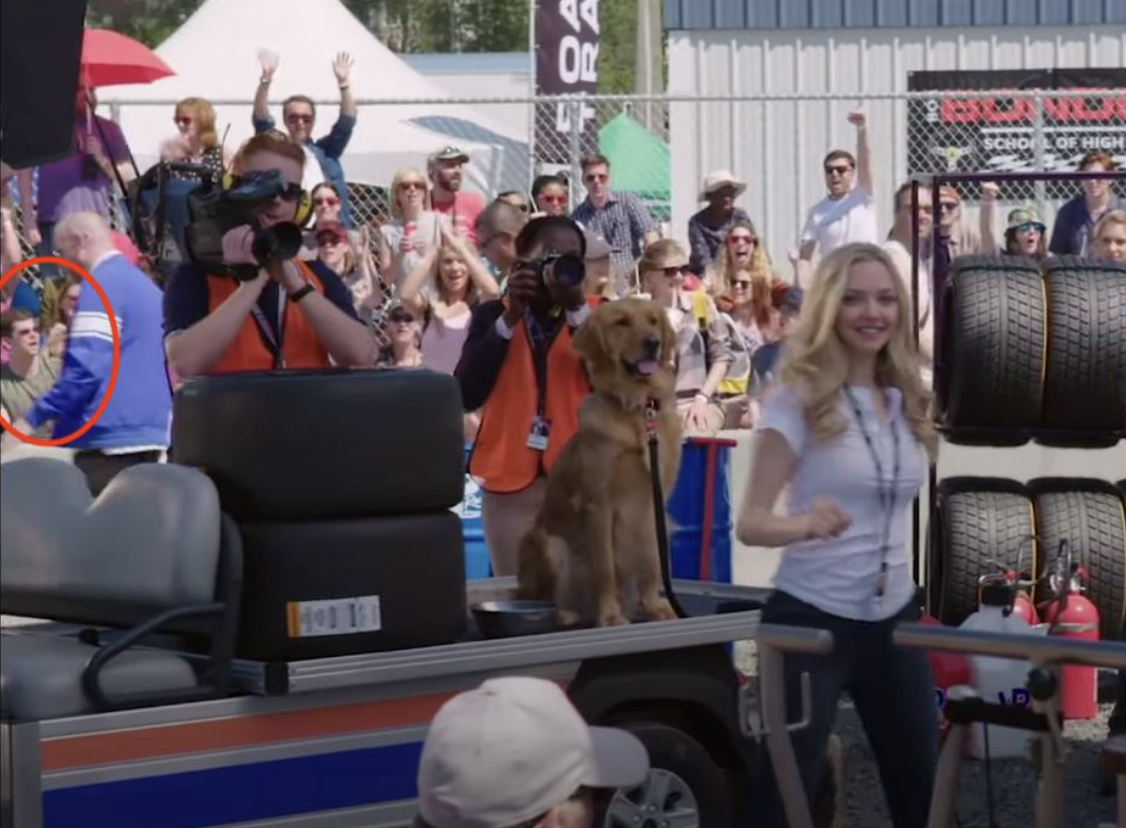 While the last entry in this series ended on a rather final note, I’ve since realized that I neglected at least one background appearance. The reason for this oversight is likely because I was unable to find myself on screen! But as the above screen-grab from a promotional video confirms, I was in fact on the set of the 2019 theatrical motion picture, THE ART OF RACING IN THE RAIN.

Readers of previous entries will note that the majority of my work as a background performer was in episodic television: The Flash, Loudermilk, Salvation, etc. For whatever reason, Vancouver seems to attract more small-screen work, which certainly isn’t a bad thing as series work tends to keep workers in the film industry more consistently employed.

The title of this particular feature suggested the usual wet climate of the pacific northwest, but given that our shooting day fell smack in the middle of June 2018, it was one of the hottest and driest experiences I’ve ever had on a film set. We were consistently reminded of the importance of staying hydrated as the day wore on at our dusty location on the Burnaby side of Boundary Road.

We had been asked by wardrobe to bring both a “summer” and a “fall” look, but I recall my relatively simple outfit of a green t-shirt, jeans, black converse runners, and shades being sufficient throughout the whole shoot. After this ensemble was approved by wardrobe and my clean-shaven mug signed off by makeup, I joined my approximately 200 fellow performers on the giant bleachers that comprised the majority of the set.

Most of us had been cast as “racing fans” with a select few designated as “raceway workers” and “pit crew”. There was a car and a driver, protagonist Danny played by Heroes-alum Milo Ventimiglia, but with no actual race track, our collective imaginations and a few bits of direction from the assistant directors would have to supply the race-day excitement. I later learned that the actual racing was lensed at the Canadian Tire Motorsport Park in Bowmanville, Ontario.

We had done a few takes when the loudspeaker came on, not with more instructions, but a stern warning. Mere minutes into actual filming, someone had uploaded several seconds of the shoot to YouTube! It’s no secret that Hollywood takes even the smallest leaks and spoilers very seriously, even for non-franchise films like this one. I’m not sure if the offending party was ever caught, but the deed would certainly be grounds for blacklisting if they had.

The second and final scene shot that day (at least for me) was Danny being awarded a first-place trophy as girlfriend Eve (Amanda Seyfried) and faithful dog Enzo (the film’s narrator, ultimately voiced by Kevin Costner) cheer him on. Rather than just sitting this time, I was instructed to walk along the perimeter of the ceremony, as if trying to get a better look. As usual, one of the biggest challenges is to not look directly at the camera, even when it’s looking at you. Seasoned actors have obviously mastered this, but every background performer wants to make sure they get on camera. Some are more successful than others at making an impression as internet sleuths have deduced.

After multiple takes and extended sun exposure, I was regretting my decision to not wear shorts that day. I’ve become less self-conscious about my legs since then, if nothing else than to help beat the heat. I was wrapped promptly after this last scene was in the can.

The film premiered just over a year later in August 2019. By this time, the releasing studio of Twentieth Century Fox had been sold to Disney and this was a perfect family-friendly picture to have on their slate. To my profound disappointment, I was unable to spot myself on screen, as mentioned earlier, but did enjoy the final product. A solid effort as far as these dog-driven pictures go.

The Art of Racing in the Rain can be seen on Apple TV, Google Play, and Disney+