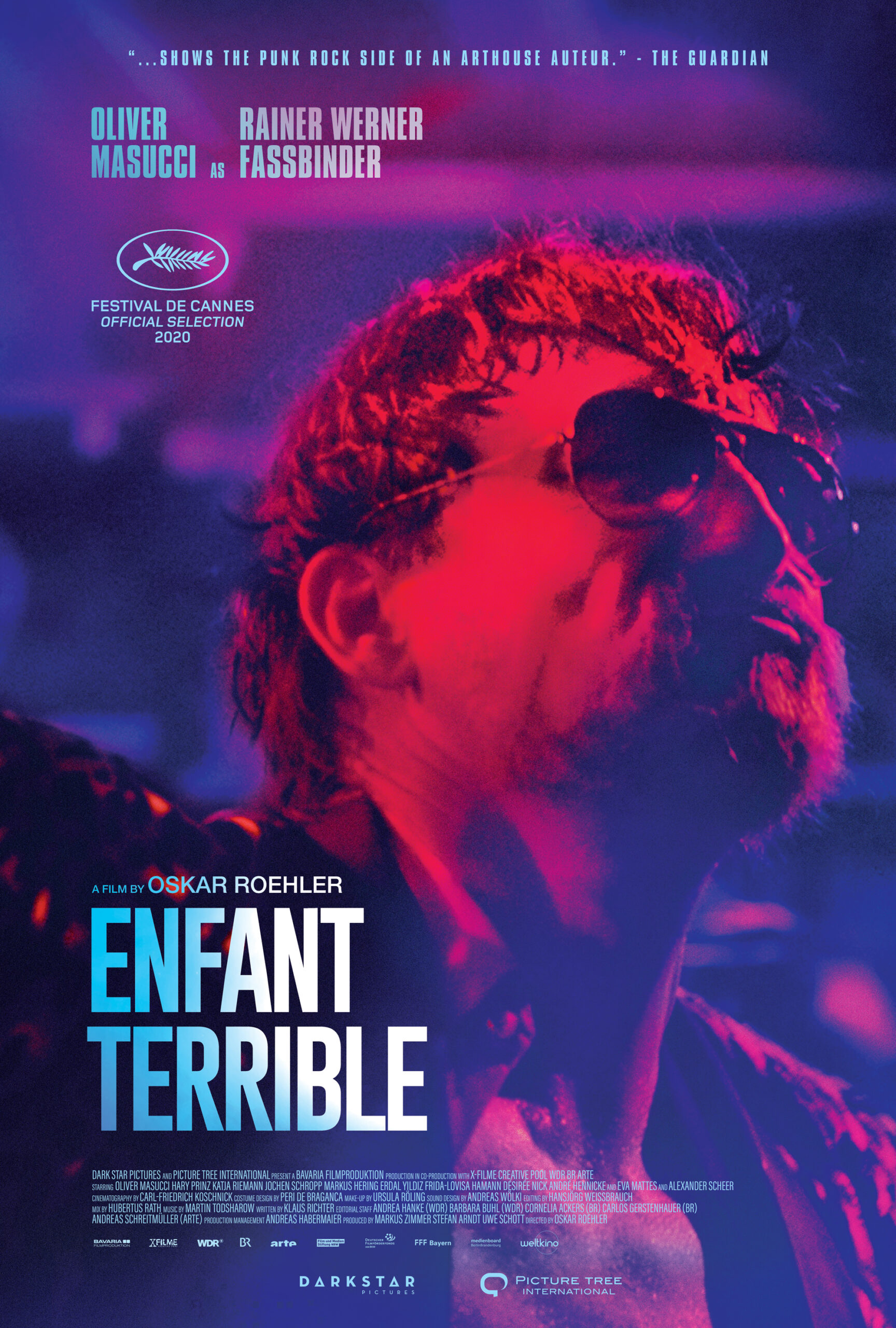 Okay, we’re going to be trying out something new: Viewings in Vancouver. This is where I view an international film that got a fresh release in Vancouver, and of course, review it. Today’s is none other than Enfant Terrible, which has had its Vancouver release at the VIFF theatre.. online, that is. But what is it all about? It’s a Biopic about a director who has always had interesting methods of directing. Now I know there’s all kinds of interesting directors, both famous and local. In the film industry, there’s always somebody who barely succeeds at all. You have a few types of people who stick out like a sore thumb and have a reputation for being difficult to work with. Some of them are conmen, some of them aren’t very professional in their filmmaking. I know a few of those types of people, I’m sorry to say.

Enfant Terrible tells the story of Rainer Werner Fassbinder (Oliver Masucci), who was known for making really bad theatre and film productions that nobody understood. Nobody really does understand artists though, I always say.  At the beginning, we watch as he tries to set up a play which isn’t enough. He tells his lead actor, he wants to go into moviemaking one night while they hang out at a bar, then they come to the theatre drunk and spray the audience with a hose, chasing them out. Rainer prepares to make his feature by collecting his actors and trying to shoot what I’m guessing is some kind of demo. It’s about every bit as similar as every failed production I have somehow been a part of and I’m guessing it’s what it was like filming those Channel Awesome anniversary specials. Rainer gets heckled at his first screening with his main crew but a few fangirls scream excitedly for him. Then from there it’s on to press conferences, and his next production, or should I say next 7 productions. That’s right, Rainer wants to make it big, and he must always be busy too. Rainer also keeps himself occupied by trying to hook up with a married black man named Gunther (Michael Clammer), and suffers from a broken heart. He still managed to make 7 films though, and now has gotten help from his producer Ulli (Lucas Gregorowicz), who tells him about the plans of meeting Gunther in Italy and getting the money to pay off all the debt he managed to collect over the years. While over there, Rainer meets his new camera person who helps shoot another film about KKK members going after a black person dressed in red. But of course, the film shoot ends up being a gong show of course. The finance gets out of control, his actors get mistreated and neglected on set, and some other things happen that simply scream ‘unprofessional behaviour’. Ugh. This movie is looking more and more like stuff I’ve experienced for years… in German. Another film comes up and after meeting a man named Salem (Erdal Yildiz) from Morocco, he learns Salem has a family. Getting an idea, Rainer snags Salem’s kids and makes plans to have the kids act in his next film with his network of close friends. Rainer learns the hard way it’s difficult to work with kids, but a lot of his hard work eventually pays off. After one of his films premieres at Cannes, he finally gets appreciated and understood when he is told the film got 17 ovations and a half hour of applause at the end. and Rainer decides to stick to emotional films he’ll make for international audiences, but Salem is finally sick of Rainer and ends up flying out to Paris while Rainer’s life continuously spirals out of control despite him making films.

The majority of the film is filmmaking, drugs, alcohol, Rainer making new friends only to have difficulties with them even to the point of killing themselves, and struggles of filmmaking as his producer turns to drugs, and nobody wants to work with him. The film is like Rainer himself: A chaotic mess, but still a lot of intensities in the story. I’ve never heard of this director, so it was like going through a course of film school for me all over again, with some extra mixed good and bad. The characters are almost always stressed, but express feelings to the fullest. I could really relate to the feelings of stress induced by messy schedules. Now the design of sets was incredible and I especially like the lighting and colours in the film. Even the brightest of colours show as muted for an ominous and spooky feeling to help the mood of the overall film. With the addition of the outfits worn by the vast majority of cast members, I can see this is such a chaotic film, but despite a lot of flaws in the story and the timeline, it still is interesting to check out. Even if it’s messier than my room when I was 11.

Perhaps you’d like to see it for yourself? Check it out, buy tickets here.