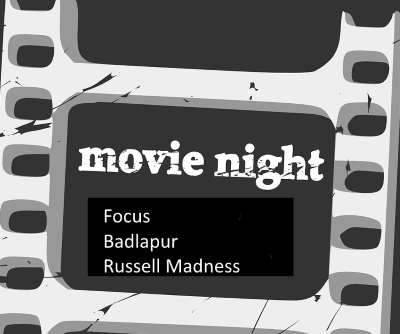 This week, I’ve decided to recommend movies that aren’t as popular but could still be interesting.

Focus – This one is a romantic comedy starring Will Smith as Nicky, an expert in misdirection who teaches his skills to a con artist named Jess, played by Margot Robbie. However, when she falls in love with him, he feels she’s getting too close and severs all ties with her. But after three years pass, they just so happen to meet again by chance in Buenos Aires at a car race. She plans to put him out of his own game with the skills he taught her.

Badlapur – In this Indian crime film, a man named Raghu is on the hunt for two criminals who killed his wife and son in a bank robbery. One is in jail and the other got away. Raghu releases the imprisoned robber in hopes to get details of who and where his former partner-in-crime is.

Russell Madness – This movie is from the same creators of the Air Bud movies, so expect it to be about a dog who’s skilled in some kind of sport. Russell is a terrier who gets adopted by a family of pro-wrestling fans who have an arena of their very own. Somehow, they discover Russell is gifted with wrestling skills, kind of awkward if you ask me. Anyways, like all pets in all animal sports-based movies, Russell makes his way to the top of the line in champions, with assistance from his monkey friend, and the strongest tag team he’s ever known, his family.