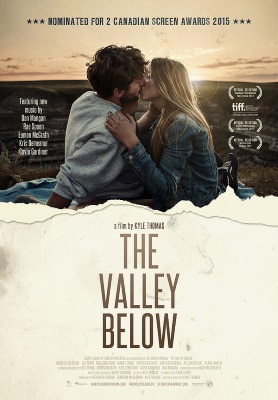 What’s in the valley below? You’ll see heartbreak, love, tragedy, sex, drugs, music, community, and people who can’t express their realities in words. Life, in other words.

One character has a tattoo with the words Proverbs 27:7 (“One who is full loathes honey, but to one who is hungry everything bitter is sweet.”) The verse may be an epigraph for the film.  But the very concept of proverbs, simple sayings that are meant to pass truths down through the generations, but can end up too familiar to mean anything, may be more significant.

We start out in summer, with a young woman driving through Drumheller, Alberta, as a DJ on her car radio predicts “a high of 34” — this is Canada, all right.

The woman is Kate (Mikaela Cochrane), the first of several townspeople we’re going to get to know. She’s about to go to university; at least, that’s the plan. She may just ditch it to stay in town and have “a house and a family” with her cheerfully unambitious boyfriend, Henry (Joe Perry). During a camping weekend, they awkwardly discuss their future, if any, and Kate reveals she’s pregnant.

Summer turns to fall, and the focus shifts to Warren (Kris Demeanor), who maintains the local ice rink, filling his slower times with songwriting, drinking, and drugs. He’s fathered a child by a woman (Mandy Stobo) who’s moved beyond him. (All the women in this film seem to have expectations their men can’t or won’t meet — and in the most extreme case, that’s the way the man likes it.) Now, maybe, he has a chance to reconnect with her and their daughter. And win $1000 in a local talent contest, all if he can pull himself together.

In winter, Kate’s parents, Gordon (Stephen Bogaert) and Susan (Lori Ravensborg), step out of the background. They’re a tidy middle class couple who look good compared to Henry’s trashy family, but their marriage is dying of indifference.

Finally it’s spring, or at least the ice is melting a little, and we learn that Easter has gone by when we zoom in on Barry (Alejandro Rae), a local mountie, and his wife Jill (Alana Hawley), sister of Warren’s ex. Some of the situations that have been building up with other characters come to crises on Barry’s watch, and it takes a lot out of him.

The last few lines in the film are full of euphemism and cliché, yet we know that there’s real emotion behind them. We see why so many of the characters express themselves in ways other than speech — painting, music, re-creating the town in  a model railroad layout, even taxidermy.

So — is this Kyle Thomas film a success or just “pretty good for a Canadian”? (Sorry, that has to be asked.) It definitely triumphs in conveying the sense of real life. (I have no idea how close it comes to life in Drumheller. And I did wonder if elements like Constable Barry’s moonlighting, Gord’s evidently lucrative taxidermy business, and even Kate’s freedom from sunburn could really exist.) The performances are near perfect and there isn’t a single line of “movie dialogue” — just real-sounding speech.

This isn’t a light, escapist, or action-filled film, and it’s not family-friendly (we get very intimate looks at the couples’ lives), so it’s not going to be a blockbuster on either side of the border. However, if you’re looking for something more thoughtful, well, think about seeing The Valley Below.