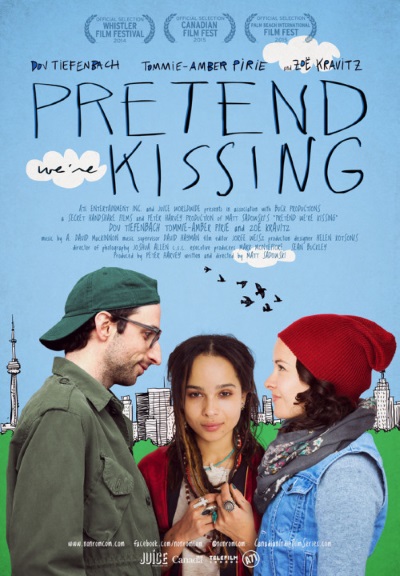 Pretend We’re Kissing – A romantic comedy about two folks who get into a romance over the weekend. Benny (played by Dov Tiefenbach) is a simple man who can’t make any romantic connections. Jordan (Tommie-Amber Pirie) is a rebellious girl who wants to prove magical love is for real. Finally the last person involved in this scenario is Autumn (Zoe Kravitz) is a bi-sexual hippy chick with agoraphobia. With all the different personalities this sounds like it could be an interesting movie — and it’s a Canadian independent one.

Kumiko, the Treasure Hunter – This movie is about a Japanese businesswoman who is bored with her routine life and escapes it through imagination. She finds an old videotape, which she thinks is a documentary, about a case of money buried in North Dakota — Fargo, to be precise.  So Kumiko leaves Japan and heads off to the frozen American landscape to find this treasure, only to end up going on a dangerous journey more risky than any movie she’s ever seen. The movie is sure to be intense and interesting, maybe even a bit humorous.

Stations of the Cross – This one is a bit more artistic, being told in only 14 shots, all of them are supposed to be continuous. It tells the story of a teen named Maria who goes through struggles in parallel to Christ’s on his journey to the cross. Maria tries to balance her personal desires with her family’s while she also attempts to cure her younger brother’s autism. I personally like artistic films and this sounds like it could be fascinating.