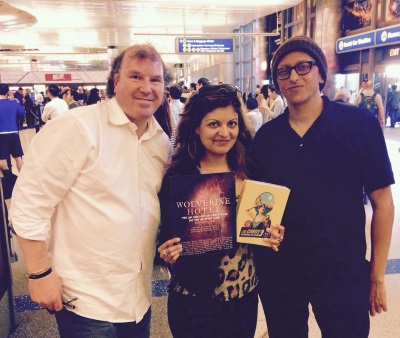 Patricia Chica, a multiple award winning director-producer who has built a loyal audience and cult following internationally, will see her latest film, horror-comedy A Tricky Treat, make its world premiere in Montreal, her hometown. The screening will take place at the Fantasia International Film Festival on Saturday July 25th at 6:45 pm. The director and her team will be in attendance there.

A Tricky Treat is the story of  “a man held hostage by a very strange family whose fate rests in the hands of two kids.” Leonard Walden plays the hostage in this shocking tale of the unexpected, and the family is played by Steve Brewster, Andrea Fletcher, Keira McCarthy, and newcomer Marco Reilly.

“We’re thrilled to screen our little film amidst the giants in contemporary genre movie making,” states the writer Kamal John Iskander, and Patricia Chica says, “Fantasia is one of my favorite film festivals, and now that I live in Los Angeles, it is a great honour for me to return to my hometown Montreal to premiere A Tricky Treat.”