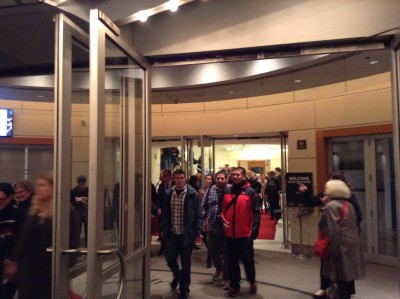 One of the biggest issues I’ve come across is the fact that some of the good movies are playing simunltaneously at different theatres. In the end, the choice depends on which is closer, or in some cases, whether it’s not completely sold out.

Ice and the Sky – A documentary about Claude Lorius, an explorer in the Antarctic who drills samples of ice and studies them to explore what they tell him about past years. The documentary shows the exhausting process it is for Lorius to explore the Antarctic and work as the weather conditions cause many issues with the expedition. A very informative movie with an interesting look about what could be potentially damaging the climate.

O, Brazen Age – A full length feature showing some artist friends who get together and discover all kinds of interesting mythologies. Problems like dentist’s appointments and love come along the way. Their adventures consist of checking out an art show, going out drinking, and hanging out at a large expensive house. This was one of the more interesting ones I saw. Aside from showing interesting struggles in life, it also makes a lot of references to many different kinds of literature. It really had me thinking.

Le Dep – Lydia (Sonia Boileau) works at a small corner store in a struggling town in Quebec. When the other employee is out, it’s up to Lydia to deal with the stocking and the local drunk. She’s doing well until a robber comes in demanding money from the welfare envelope she got earlier. Lydia tries her best to fend off the thief and eventually uses other methods when she finds out who the thief really is.

Haida Gwaii: On the Edge of the World – Another documentary, only this time it’s about a small beautiful island inhabited by some of the most interesting people. Despite going through many dangers and hazards such as loggers destroying the parks, or even a small pox outbreak, the Haida Nation stands strong no matter what. Even more interesting is the fact that this was produced and shot by only three people.

There’s quite a fair amount for me to check out, I just wish scheduling was a bit easier for me.