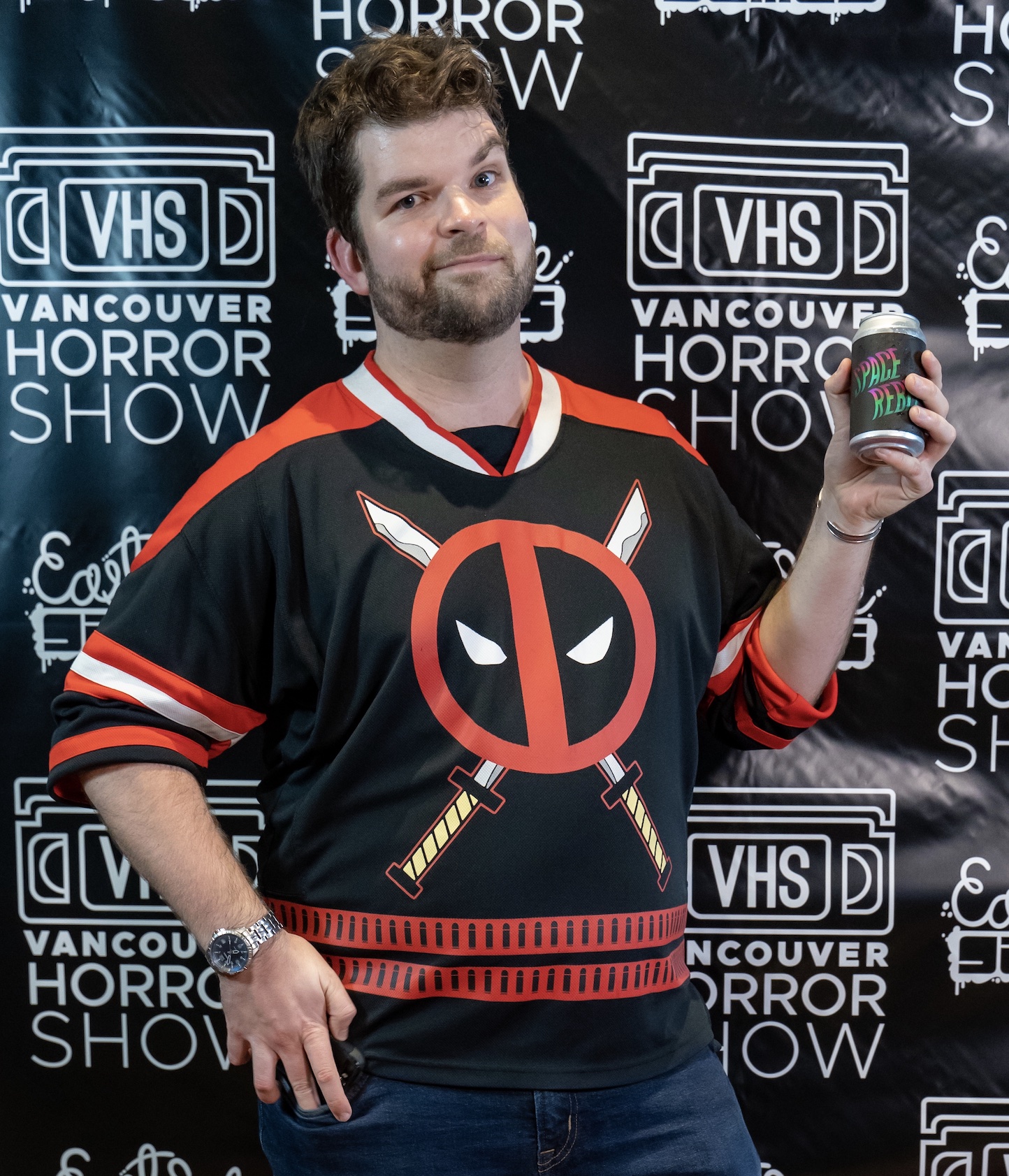 To most generations except perhaps the latest one, the letters “VHS” conjure up warm memories of fuzzy tracking, killer box art and kind reminders to rewind. But for the west coast movie fan, it may have come to mean Vancity’s premiere horror film event: the VANCOUVER HORROR SHOW, now in its 4th edition.

“I would pitch it as ‘great films in the horror genre” quips festival director David Taylor as we chat between screenings. “The purpose of it is to build community and to showcase works of independent filmmakers and also to disseminate their works to the public.”

It may all sound rather formal, but the atmosphere on the top floor of Scotiabank Theatre on a rainy October Tuesday is anything but restrained as VHS 2021 kicks off with a  live event after having gone purely virtual due to that virus you’re sick of hearing about. The booze was flowing, the photo walls were poppin’ and the filmmakers and film fans were raring to go for what promised to be an electric evening of thrilling chills.

After the standard technical difficulties (is Scotiabank Theatre old enough to be haunted?) and even more standard apologies, the show commenced its first half with Lili, where the title character finds her film audition taking a dark and bloody turn. Witches Midnight gives a FaceTime flavour to the found footage genre as Cancon screen veteran Beverly Elliot contends with an intruder while babysitting her granddaughter. Hunters Cabin showcases the perils of being a modern Werewolf. Koreatown Ghost Story features Margaret Cho as a creepy acupuncturist with some needles to grind. Larva amps up the camp as a rogue meteorite morphs a ragtag girl’s soccer team’s coach into an unstoppable CGI alien and Swipe provoked the biggest reactions of the night with it’s all-too-real tale of a tinder stalker

“It feels amazing. It really does.” David tells me during the intermission. “I spent the  entire time sitting in the wings just listening to the audience’s reactions to the films. You don’t get that on the virtual experience.”

“It’s so much fun to hear an audience clap and cheer.” concurs Gigi Saul Guerrero, director of concluding film of the night, Mistress of Bones. “I think as a filmmaker, that’s the most rewarding part of making movies. We’re having a blast!”

Regrettably, I had a previous engagement that preventing me from concluding VHS’s opening night (shout-out to 2nd half films The Axe and the Iron, Itsy Bitsy Spider, The Relic, and the aforementioned Mistress of Bones), but I was impressed enough to plan to return for their post-COVID (fingers crossed) event in 2022 where the current hybrid model may very well continue.

“Last year we pivoted and moved all our programming to an online platform, which was an undertaking in and of itself.” relates VHS artistic director Meghan Hemingway. “But it really ended up being a bright light during a dark time and we found audiences all over the world. It feels like it wouldn’t be a great idea to cut off that portion of programming because it’s been such a connective tissue. That’s what it’s about, building the community.”

That community seems destined to keep this growing event around for the foreseeable future if this event’s reaction were any indication. After all, it’s not really Halloween without horror films these days and the Vancouver Horror Show may just be the best ticket for this and future Octobers. Stay scared!