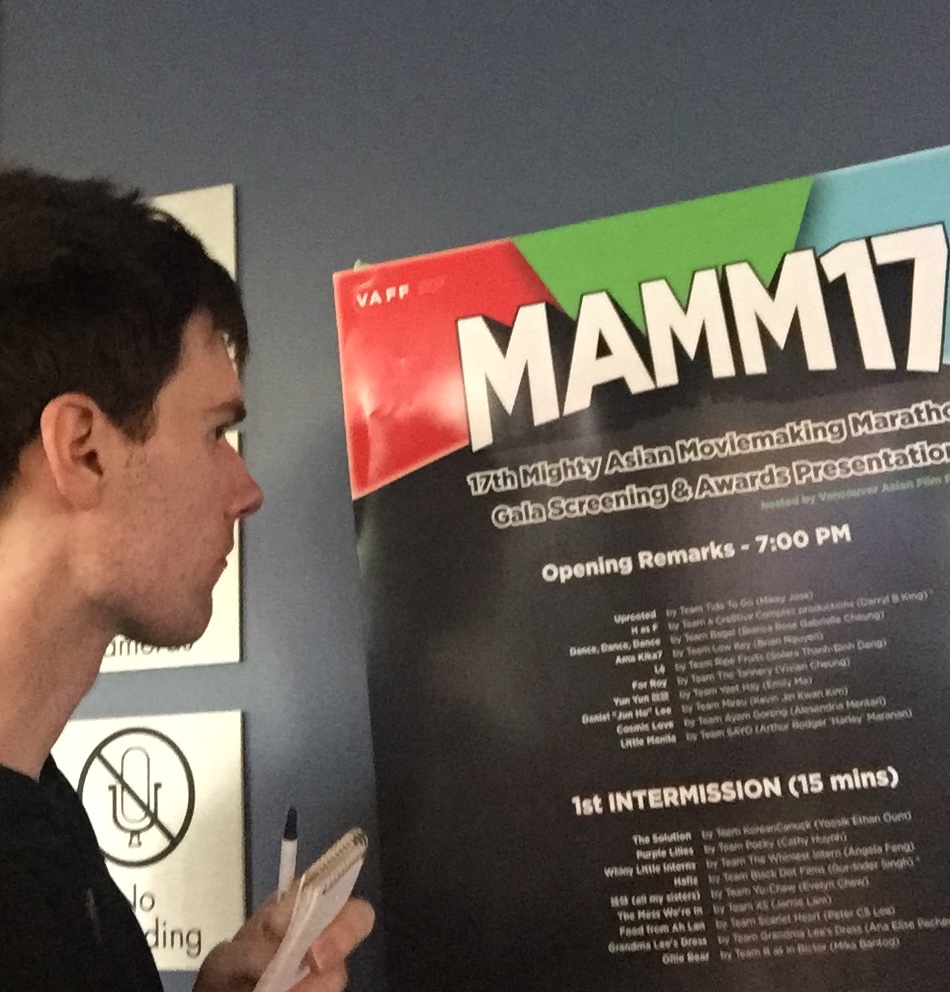 Yes, I’m doing a double header article day today. Because there’s been so much going on this month. I’ll be breathing easy by the start of September though. Still, everyone seems to have scheduled their events in August at some of the most used and smallest venues ever.

Vancouver Playhouse can only hold so many people, and when it comes to some of the much bigger events, the place can be fully packed. Take MAMM17 for example. An interesting case for once was the lineup and such. Since they were letting people in at 6PM, you’d think there’d be a lineup of attendees and teams by 5PM, right? WRONG. I showed up at 4:42 and there was barely anyone there. Eventually, a filmmaker did show up and converse with me and it was especially interesting that he knew my name already. Eventually, more people showed up and got to be part of the will call lineup. As it turned out, the venue was overbooked, and the lineup for tickets was also a mess as it first was a mix of ticket holders and people who were trying to get tickets. Small clusters finally filed their way into the theatre, and stood around to converse indoors. The first thing I noticed about the theatre was that the first seven rows were reserved, and so I ended up sitting in the way back of Vancouver Playhouse for once. Eventually around the 7PM mark, people started swarming in, and I recognized some familiar faces. Then finally, things started with Lynne Lee MC’ing, Barbara Lee starred in a video speech that was silent at first, and then it went back to Lynne explaining how there were some films that focused on queer subject matter and they went more nation-wide getting some content from Toronto. Regina Leung did gave some shoutouts, especially to this business, but I’m starting to feel obsolete about the lack of enthusiasm in the audience for us. Then it continued with a cheesy short film starring some of MAMM’s executives as superfilmmakers, who plan to make films that save the world? They can’t, because the evil Dough-Nut steals all their budget, and it’s up to the MAMM teams to save the night. So the teams crowded their way onto the stage, things got chaotic and the executives came out in their costumes for an elaborate and interesting performance. As someone who has said Superfilmmakers would be a noteworthy idea for a film, I thought this one managed to go from flat to sharp pretty fast.

1st Block – Now we could finally see some films. Every film had an introduction vid from the director who explained a bit of who they were and what their film was about. I would’ve preferred a more different approach and let some of this be left to mystery or have a program printed out. First off was Uprooted, a musical about a Filipino mother and son moving to Canada, only to have to go back to their home country for a dying family member. I’m not too fond of musicals, but found this one to be heartwarming and dramatic. Then came HasF, a 1-minute short about a man explaining his Chinese name, and while the colour correction was significantly inconsistent, the film was still kind of funny. Next was Dance Dance Dance (funny, that title reminded me of something else), where two women share a bond over a cover of Mozart’s most commonly played symphony that sounds like a cat owner/enthusiast or a 6-year old would sing. Maybe there’s a YT video of cats singing classical music? I wonder. This film broke into a weird questionable concept involving a funeral, a young no-nonsense girl, and one of the strangest parties I’ve ever seen. Now for the full disclosure part as I happen to know the ‘billionaire’ who submitted the 1-minute film that came after this. Ama Kika7 was about a superwoman with Indigenous roots, followed by another 1-minute film called LE which was a woman talking about her origin story. Both 1-minute films were very deep stories. Next came the sad film, For Roy, about a family dealing with their ill father as he slowly dies, while his youngest daughter attempts to make enough paper cranes for good luck. It reminded me of a book I read in Grade 3, which was one of the few good memories I have of that time in my life. Then there was another 1-minute ultra short, called Yun-Yun, which featured a woman who didn’t seem all too interested in her family, but it ended on a good note. Then there was the story of Daniel “Jun-Ho” Lee, which focused on what a man’s name was. It’s films like these that make me question the origin of my last name. And time for more full disclosure as I talk about Cosmic Love, which was submitted by another team with people I know and this short film was an awesome short simple story about coming out and discovering true love. Then the block ended with the sad but sweet and kind of funny film called Little Manilla, where an elderly Lola wants to go back to the Philippines before she dies but can’t due to her condition. Her daughter and grandson do all they can to make her feel like she’s there before she passes on, even acting as her younger sister to make her feel better.

An intermission came around here, and man was it chaotic. I have never seen a line to the men’s room so long before. I’m not kidding. The men’s room in the Vancouver Playhouse goes all the way down some stairs, and there were men waiting all the way up along the side. At least I met some familiar faces on the way back up. Also, it felt like there was a lack of activity this year. Very few photo ops, no VR exhibits, just people milling about. There really should’ve been much more for a return to a venue in a long time. Plus, for some reason the all-gender inclusive washroom signs from VQFF hadn’t even been taken down. I wonder why. 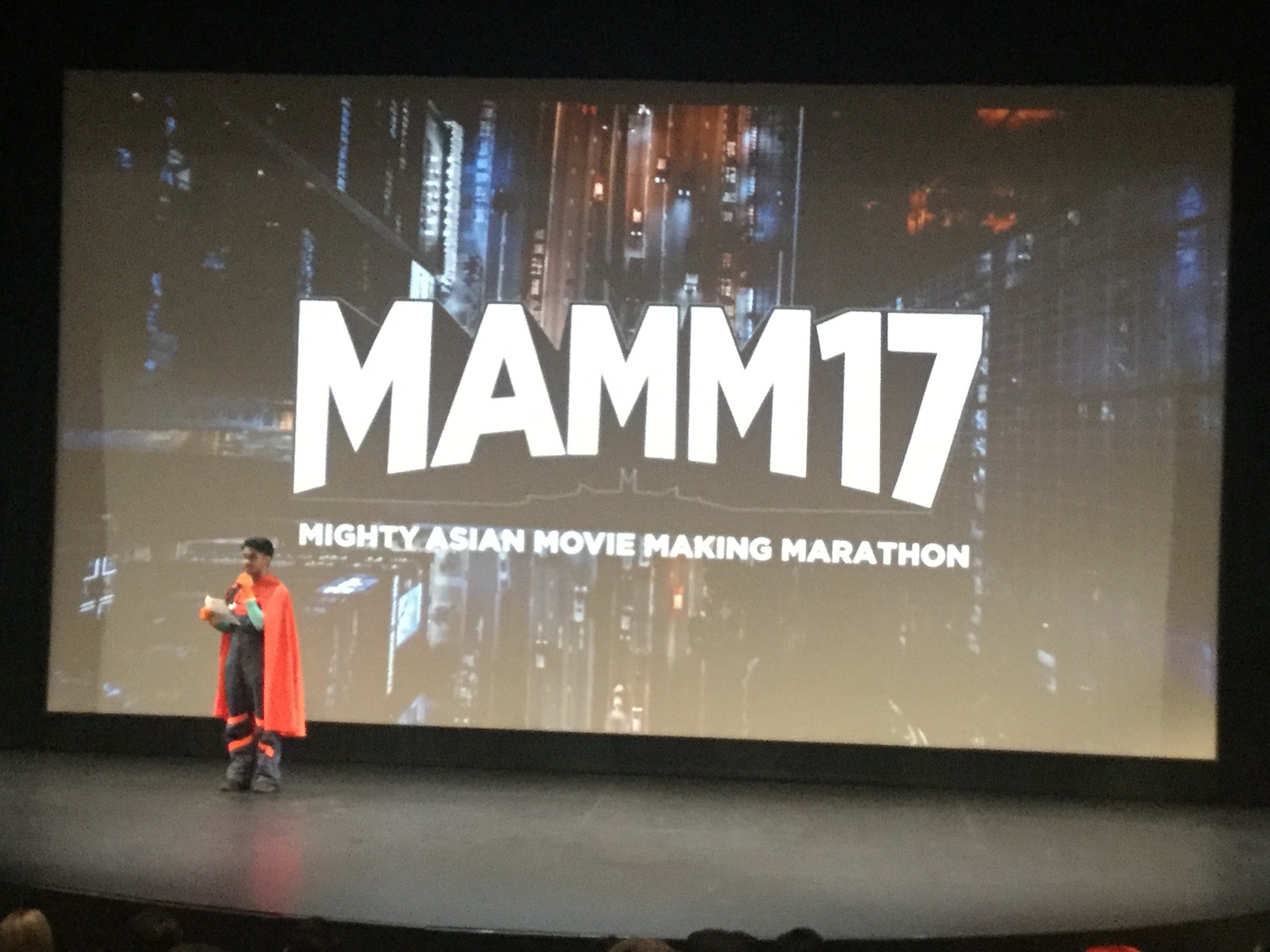 2nd Block – After 15 minutes of hardly much going on, people finally made their way back to their seats and got ready for more films. First off was The Solution, an ultra-short about a man using names to remember something. But what? The result is quite hilarious. Then there’s Purple Lilies, which focused on two sisters struggling at home. It’s a beautiful film that kind of gave me Beezus and Ramona vibes. Then there was the interesting Whiny Little Interns, which shows what happens when interns get pushed too far, a woman learns her interview has her working a job for free. Been there, done that, one of those better-you-don’t-know stories. Next was Rafiz, about a young boxer dealing with racism in his hometown and then being interrogated at the airport by TSA agents, it was a disturbing story. Focusing a bit more on the COVID pandemic and how racism was a part of it, All My Sisters had a Chinese woman meeting other Chinese women at a local park during an incident. A very profound film. The film that came afterwards was The Mess We’re In, which showed a mother and daughter living in a messy and cluttered house, and the whole film was a mess of humourous and heartwarming family feels. More lovely family feels came with the film Food from An Lan, as a woman has food at her mother’s restaurant and feels positive vibes. Grandma Lee’s Dress was a different turn from the usual films instead focusing on the white daughter of an Asian mother, and the daughter finds her grandmother’s dress to use in a school project. It started out humorous and then changed, it almost became an anti-bullying PSA. Up next was an ultra short that captured everyone’s heart, Ollie Bear about a little boy and his name’s backstory. The Mess We’re In, and Food from An Lan then replayed due to technical errors earlier. It’s strange how this kind of thing happens every year.

Awards Presentation – Lynne stuttered in the intro, but I guess that’s because she was excited to introduce this event. A good amount of noise throughout this one and I certainly think audiences are getting louder these days, plus what’s these audience lap drumrolls still being a thing? You think somebody would’ve hired a sound-guy to play a drumroll sound on a device by now. Well, I certainly got the brunt of loud obnoxious screeches because some of the supporters of For Roy were behind me and stood up excitedly when that film won its awards, for Best First Time Director of a Short Film, and Best Overall Short. Speaking of awards, there were only two that got the most, which was four awards each. The Mess We’re In won Best Cinematography, Best Director, Best Short Film, and Audience Choice Best Performance in the Short film categories. The director for that one didn’t seem the most prepared given how many times they had to get up and was pretty tired, not to mention the crew had even less to say. Ollie Bear won Best Performance, Best 1st Time Director, Audience Choice, and Audience Choice for Best Overall Short in the Ultra short category. Even less of a speech from the lead talent since he was pretty young, but his mother had some nice words, and I’ll bet she’ll enjoy where this new mini-cash machine goes to next.

Afterparty – Everyone really wanted to go out and get to this and spend their money on the booze and whatnot because as per usual, it’s a cash bar at events like these. But there were some free appetizers right outside the door. I’m not exactly sure what they were though. Still interesting cuisine, a chance to bond with people as they scrambled through different places, hung around to talk, and there might’ve been a group photo with the MAMM teams at the end. I’m not too sure, everyone just wanted to leave because they had limited time at the venue. That night didn’t seem like much even with a full capacity but at least the Audience choice voting system was better prepared than ever and I certainly enjoyed the vibe of the films and the event. But if this keeps expanding, they’re seriously going to need to find a much bigger theatre to host this event at. Just saying.