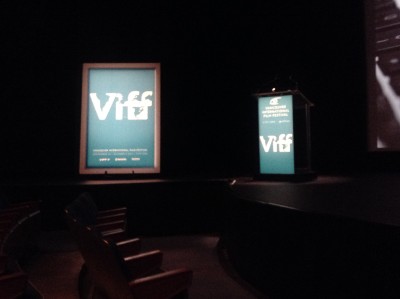 Fire Song – High-school graduate Shane had plans to move out of his small city to Toronto and university. But his sister killed herself, thus making his mother spiral into an uncontrollable depression. Once again, another adolescent/young adult film where plot is somewhat lacking and slightly muddled with an unexpected ending. Still was pretty interesting though.

Into the Forest – This played after a miniature awards ceremony was hosted. Into the Forest is a rather dark film showing what life is like in the woods when you have no source of power. Two sisters have to fend for themselves and learn basic survival. It’s not easy living without electricity. This was a very freaky film to watch. It certainly had some extremely disturbing moments but at the very least it goes to show what happens when power goes out, thus driving people insane. I have to wonder what happened to the rest of the world as well.

Sabali – You thought the soul conspiracy of The Devout was strange? This is a more interesting mystery. When Jeanette develops an unexpected heart condition, she has to get a transplant. Her new heart was donated by an African woman who got stabbed to death by a psycho. Suddenly Jeanette has dreams and personality traits just like the deceased woman. To make matters worse, the woman’s son starts following her and turning Jeanette into his mother.

Hurricane – I only watched this one because someone at the Gala recommended it to me saying they worked it. They also told me that Into the Forest was funny. They are one twisted individual. Anyways, this was a documentary showing the life of Hurricane Lucy. I learned a lot about devastating effects of hurricanes, but other than that, the movie was pretty much “What if storms could talk?”. It also aired in 3D, so having particles, bats, and raindrops fly toward me felt kind of weird.

Entertainment – At every single VIFF screening, there’s this one clip showing a guy holding a sports trophy making fart noises into a microphone. That was from this movie. Starring Gregg Turkington as a comedian who is traveling around doing his comedy routine. The comedian’s routine/performance consists of telling riddles in a nasally voice while looking like a well-dressed Hal Thompson from Blamesocietyfilms. Oh, and John C Reilly is his cousin. Who knew? So many people in the theatre were enjoying this whole flick, I don’t think I’ve seen anything so laughable before.