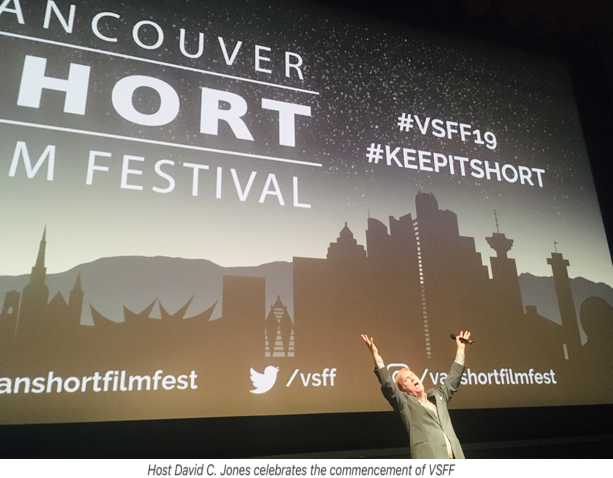 For the first two decades of cinema, all films were short films; often clocking in at twenty minutes or less. As the form and storytelling evolved, most cinematic stories have since settled on a standard 90-120 minute length. Nowadays, the short film is utilized by many filmmakers to grow and hone their craft and those in BC are no exception. While most festivals have blocks dedicated to shorts, It’s at the Vancouver Short Film Festival (VSFF) where the entire program is dedicated to them.

Now in it’s ninth edition, the VSFF ran over two days this past weekend from Jan 25-26 at the Vancity Theatre. “The ultimate goal is to support and foster local BC talent, so that’s why every film that is chosen for the festival has a BC filmmaker involved.” says festival co-director Zlatina Pacheva. There was no shortage of them in attendance as many are based in the Vancouver area, including writer/director Anaïsa Visser. “I’m really thrilled that we’re screening in Vancouver so that I can be here. To be able to answer questions, to be able to get feedback, to be able to see how the film lands in a way.”

Visser is representing Bordered, a timely drama focused on an American border patrol officer who must decide between his duty and his conscience as he encounters two Syrian refugees attempting to illegally cross the border into Canada. “It’s based on the true stories of refugees moving across the border.” she tells me as we chat in the theatre lounge. “It’s a film about finding common ground, regardless of where you’re from or what your religion is.”

While the talent involved may be local, romantic drama Tokyo Lovers was actually filmed in the eponymous city. “We already had a trip to Japan planned” relates director Mayumi Yoshida who also pulls triple-duty as the film’s writer and co-lead. “So were were (all) like ‘oh! Wouldn’t it be nice if we got to film something because we’re there.’ We wrote the script in a weekend and then we shot the thing in 8 days.” The impromptu working-vacation certainly pays off as the finished film about a Japanese-Canadian spending the holidays with his girlfriend’s roommate after the former suddenly leaves town sports stunning production value from it’s foreign location.

“It started with me kinda reaching out to a prisoner I saw in a documentary and we wrote letters back and forth for about two years.” says writer-actor Adam Lolacher regarding A Snake Marked, a mind-bending look into a disturbed prisoner, forced to confront his checkered past after a visit from his estranged father. “We’ve been friends for many, many years.” adds fellow actor Juan Riedinger, here taking the directorial reigns. “This was an opportunity to work together with the co-writing aspect and me directing Adam, which I’d never done before really.”

The filmmakers of Programme 1 take questions from host and audience.

This year’s festival set a record for number of submissions (over 250) and number of films shown which settled on 39 shorts across five programmes culminating in an awards ceremony where Shuttlecock, a satirical comedy about a failed badminton player staging a comeback by any means necessary, took home the Audience Choice Award. I had the pleasure of working on this particular film as an assistant editor. The award couldn’t go to a more fantastic team!

Considering that you get an average of eight films for the same ticket price of a regular feature at Cineplex, along with the energetic stylings of host David C. Jones (pictured above), the Vancouver Short Film Festival offers real value for filmmakers and anyone willing to give the short film a chance. It certainly isn’t easy telling a compelling story in twenty minutes or less. As Blaise Pascal once famously said: “If I had more time, I would have written a shorter letter.”