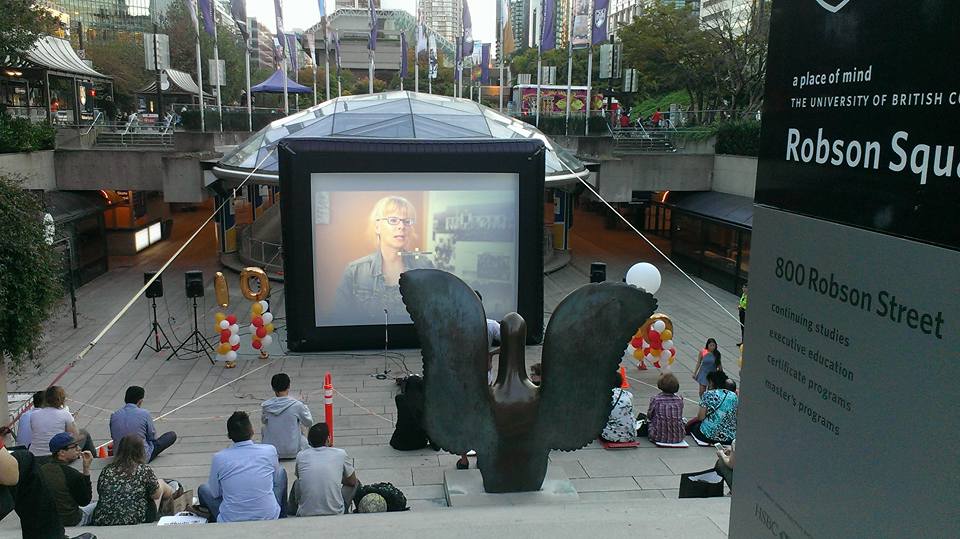 Air Canada, for 10 years,  has been gathering short Indie films from around the country for its inflight entertainment. How to celebrate something like that?

Simple. Set up a giant screen and projector outside in Vancouver’s Robson Square where everyone can sit on the concrete stairs. Supply free popcorn and cushions. Maybe next year, consider the giant statue in the middle whose wing covered the subtitles for the French Canadian films. Oh well, on to the films.

Some movies were inspirational, such as In Season, The Return of Throat Singing, and Clouds of Autumn. Then there were some weird ones like Feathers and Drifted. There was a slightly funny film called Nothing Grows Here.

One highlight of this year was the Duo Twin Bandit performing some live music before the films started off. The movies themselves weren’t necessarily understandable for the average viewer, but  they all had artistic viewpoints. I honestly think for a 10th year in festival history it could’ve been a lot more like last year, but that’s my opinion. And I’m not just saying that because last year had gift bags. And free booze. Okay, maybe because of free booze.