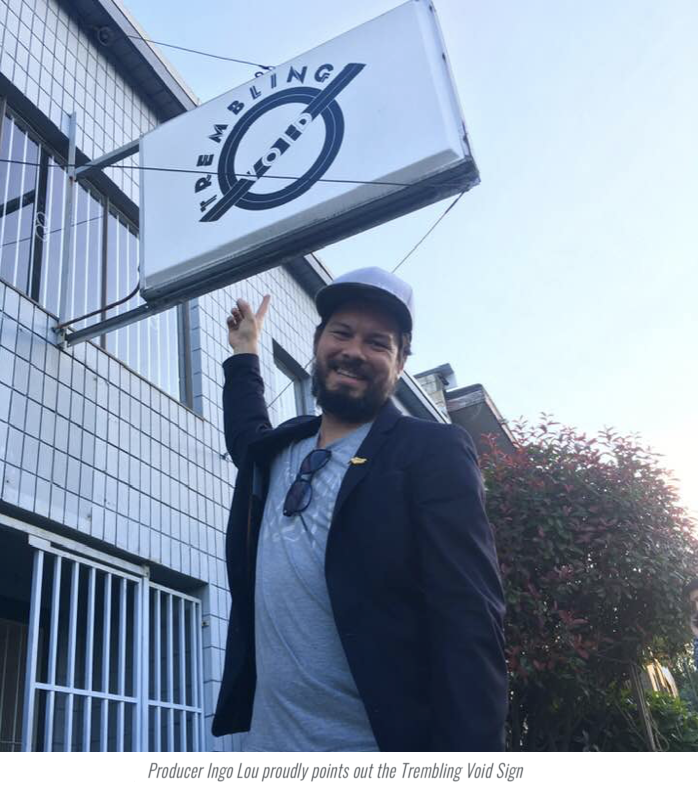 While most of the space crunch in Vancouver seems to be centred on housing, there is an even tighter squeeze on arts and cultural space in Hollywood North. No one feels this more keenly than the tireless indie filmmakers who often find themselves jockeying for space. It’s not just shooting locations they’re seeking, but office space, editorial suites, camera equipment, set decoration and props as well. One local studio has decided to make the search a little easier with the opening of a new venture just off Clark Drive, Trembling Void Space.

“Trembling Void Space is a place that indie filmmakers can call home.” Producer Ingo Lou tells me over the phone as he and others put the finishing touches on the space in preparation for the launch party. “We have camera, props, set dec, grip and lighting available for filmmakers to use in the studio. The space itself is designed as a (sort of) coral reef in which an ecosystem can hopefully take hold where filmmakers will be able to have all the tools and resources available to them as well as access to one another.”

I got a chance to see this venture for myself at Trembling Void’s official launch party on  Saturday June 29. Located in the shell of an old auto repair shop at 1270 Frances street, the space joins other local businesses that have taken advantage of cheaper rents in Vancouver’s light industrial area. Neighbours include an artists collective, craft brewery and an Earnest Ice cream shop.

I arrived early just as the food was being set out and promptly noticed that despite it’s virgin status, Trembling Void felt already lived in. “On our soft launch when we first opened on June 1st, we were fully sold out already.” Ingo is proud to tell me. “So all six offices are spoken for and all the warehouse space is spoken for as well with three different gear rental companies working at the back.” The equipment room is particularly impressive with shelves overflowing with various lights and stands of all kinds. Veteran DP Richard MacDonald was on hand demonstrating some of the products on offer. Many of them can be controlled remotely via iPad. For a film editor whose barely been on set since film school, it’s truly eye opening to see how versatile and flexible on set lighting and camera mounts become every year. Another room yields the small but eclectic collection of set dec and props courtesy of Shawn Major. Clad in a kilt and glitter shoes for the occasion, Sean showed off a collection which includes everything from house plants to rotary phones. It will save many a filmmaker a trip to the thrift store! Wendy D and her wall of scream

It’s not exclusively indie cinema tenants however. One curiosity and a veritable hit of the party was the fascinating photo installation of Wendy D. Started nearly a decade ago, Wendy has been shooting black and white portraits of people right at the moment they scream and the moment after they finish. Although my recent dental work gave me slight pause, I couldn’t resist participating (you’ll have to visit Wendy if you want to see the results of my photoshoot). I must admit, being able to scream and yell with abandon is quite a rush and I’d recommend anyone to try at least once. It’s a fun way to be immortalized and you’ll join the likes of Smallville actor John Glover and Battlestar Galactica alumnus Aaron Douglas. There ain’t no party like a Trembling Void party…

The studio space itself wasn’t quite filming ready yet, but for the purposes of the evening was converted to a temporary local art gallery with local indie show reels projected on the opposite wall. With free food and reasonably-priced beer flowing, it was an excellent night to catch up with some familiar faces. As I often say, it’s a big town here in Vancouver, but it’s a small world.

“Everyone is connected and networked by one degree of separation in this town.” Ingo continues.” We will 100 percent be working closely with every other organization that’s involved in indie film in some capacity even if someone’s just working on a film and they’re using the space to shoot, to prep, or to edit.”

When it comes to money, the folks at Trembling Void have another idea up their sleeve: Indiebucks. As described by Ingo:  “What that entails is that every member in the space is given a certain number of indiebucks every month as part of their membership and they can use those to pay for filming in the space or renting our gear. They’re also transferrable which means they can hand them out to their friends and colleagues. This already happens in indie circles informally.”

Now that the confetti has settled and the alcohol has run dry, it’s time for the real test of Trembling Void’s long-term viability. “Our expectation is that if we can demonstrate the financial viability of a space like this.” relates Ingo as our interview comes to a close. “It would allow us to attract investment from somebody who would see the opportunity to create a more permanent space in Vancouver.” I’m sure I speak for most of the city’s indie film community when I say we certainly hope so!